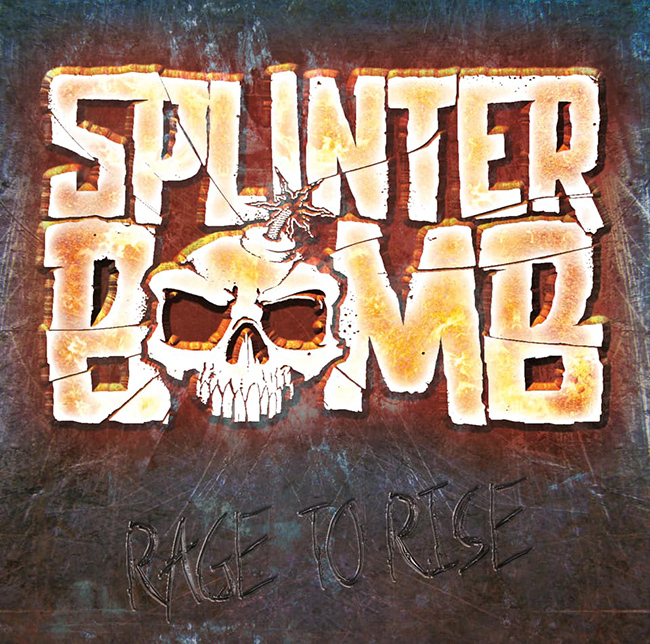 The gents of Splinterbomb took their time, but now there is an EP with the intriguing name “Rage to Rise” and I was very curious what it eas all about.
According to the band bio, the band claims that “their groove metal became more dynamic, tight and especially much heavier.” I’ve seen Splinterbomb a few times and in 2017 I wrote a review of their great performance on Occult fest.
So, with a lot of anticipation I cranked the volume of my hifi set up and immediatelya loud growl fills the room.

The EP kicks off with “Nuclear Warfare” and that sets the tone for the rest of the CD. Singer Michel van Bijnen gives a low grunt, while the band explodes in to the track. The speed goes a notch down and than changes over in a more melodic phase. The part where singer Marcel sings a bit more clean makes it quite interesting.
The song is grooving and has some interesting changes in its pace. With “Free Your Mind”, the band continues where Nuclear Warfare ended. This song has no real break or change of pace, which is a nice break of the rules.

Song number three on this EP is titled “The Tears, The Struggle, The End” and is my personal favourite. The grooving drums and bass is insane and Marcel’s (a bit) monotonous singing fits perfectly. The break following the strong intro is nothing short of awesome! Spoken text which changes over in demonic speech, pumping guitars, bass and drums.
Near the end of the break, the pace is slowed down so much, that Marcel has to sing staccato which fits well.
The build up to speed is an interesting mix of slow grunting and fast paced music. The finale has a great build up, but with a fade out, the end the song is a bit of a let down.

With “All Against All” following shortly after the “The Tears, The Struggle, The End”, there is not much time to moan over the ending of the previous track. With a bit more doom influences in the beginning, this song is of to a slow start, but it doesn’t take a lot of time to change in to groovy thrash with a pretty catchy guitar riff.
The distinctive break is very beautiful and you can hear the slapping strings of the bass played by Michel Dappers. It’s subtle but at the same time emphatically present.
When the bass is playing the melodic part of this section, this comes suddenly to a full stop and Hein Willekes (guitar) takes over from the bass with the same scheme. Nice!
The tempo varies a few more times towards the end, Which makes this song very interesting to listen to!

The change over to the next song “Hide or Fight” is quite a leap, but the straightforward fast grooving metal is very welcome. This is the fastest song on the EP and it kicks ass. Not much else to say about it, other than to keep your right foot under control when you’re driving a car!

The last song of this EP is called “Insane” and is quite a bit slower than the previous song, but pretty groovy. I really like the staccato bass and guitar in this track\, with the occasional squeal of Hein’s guitar.

Conclusion
The years between “Capital S” and “Rage to Rise” are well used by Splinterbomb to refine their sound. The bands claim that they became more dynamic, tight and especially much heavier is a righteous claim. The pace changes and the breaks are still highly interesting.
The audio quality and the mix of this EP is way better than “Capital S” and therefore better defined. Especially the vocals are much better audible.
Normally I fiddle some with my equalizer to get the best balanced sound, but time and time again I found myself resetting everything back to neutral for the best balance and that happens not very often!

This groovy kind of metal of Splinterbomb is very catchy, but the ultra-ultra low grunts are not really my cup of tea. There’s not a lot of that and compared to the previous album, the vocals are much more varied.
My only real point of critique is the ending of the best track on the EP; “The Tears, The Struggle, The End”. A perfect build up, a sudden, but awesome break which flows into the groovy continuation of the song and then… a fade out. Please don’t do that again 😉