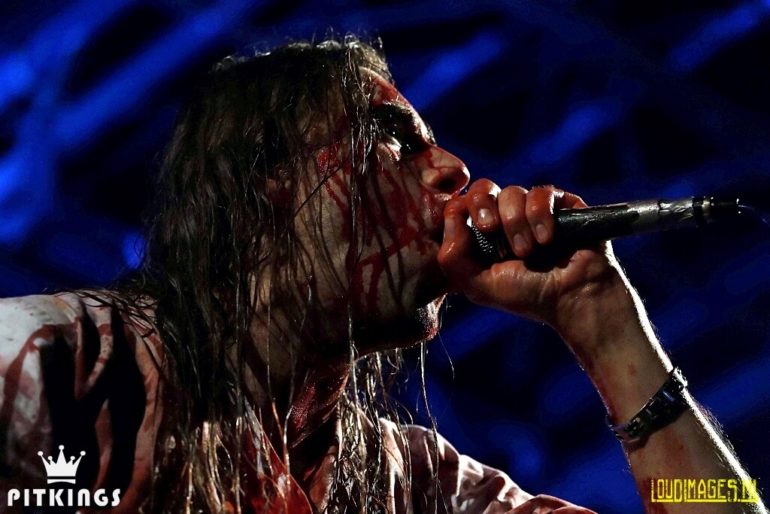 September 1, 2018 | Schoonebeek – Some time ago I was asked to attend a relatively small festival in the Drentse out backs of the Netherlands called Schoonebeek DeathFest. The first edition was in youth centre Goeroe in Schoonebeek, but due to success the organisation decided to scale it up to an outdoor festival. A location was found on the grounds of the NAM (Dutch Petroleum Company). The terrain is spaciously set up and had a smart layout, with the sun behind the stage.

Aeon of Disease (DE)
Due to a severe traffic jam, I walk through the ports when Aeon of Disease was about halfway through their set. As I get my gear ready, I am surprised by the melodic death metal of this band. I sit and listen and actually quite enjoy this band! I snap a few pictures from the small but rapidly growing crowd. The majority of them is standing still, although the music is quite catchy. On stage hair is flying and some serious effort is displayed to perform a great gig and that is what it is. Not bad at all for an opening band! 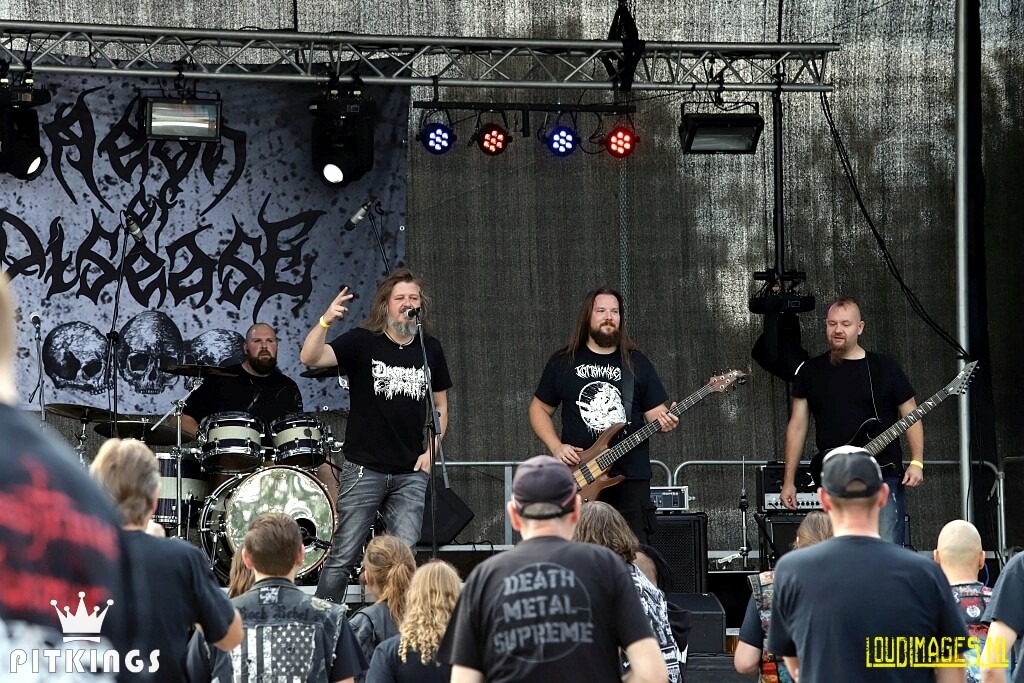 Gravebomb (SWE)
After a relaxed changeover, the crowd is about doubled since I came in and Gravebomb is having a bit of a problem with their soundcheck. Drummer Rickard doesn’t hear singer Petter on his monitor, but when it takes too long to get it fixed, they Rickard says he can play without… And that is just what he proves. It is heavy and loud and as far as I can tell he doesn’t miss a beat. The crowd is wakened by Aeon of Disease and with Gravebomb the neck muscles are tested for the first time today. Heads are bobbing in front of the stage and Gravebomb is doing a splendid job. Guitar solos are short, complex and fast and a lot of fists are raised. At the end of the set, there are some problems with the sound. Pity, because the last song is much faster and more ferocious than the rest but isn’t as audible as it should have been. Nevertheless still a great set! 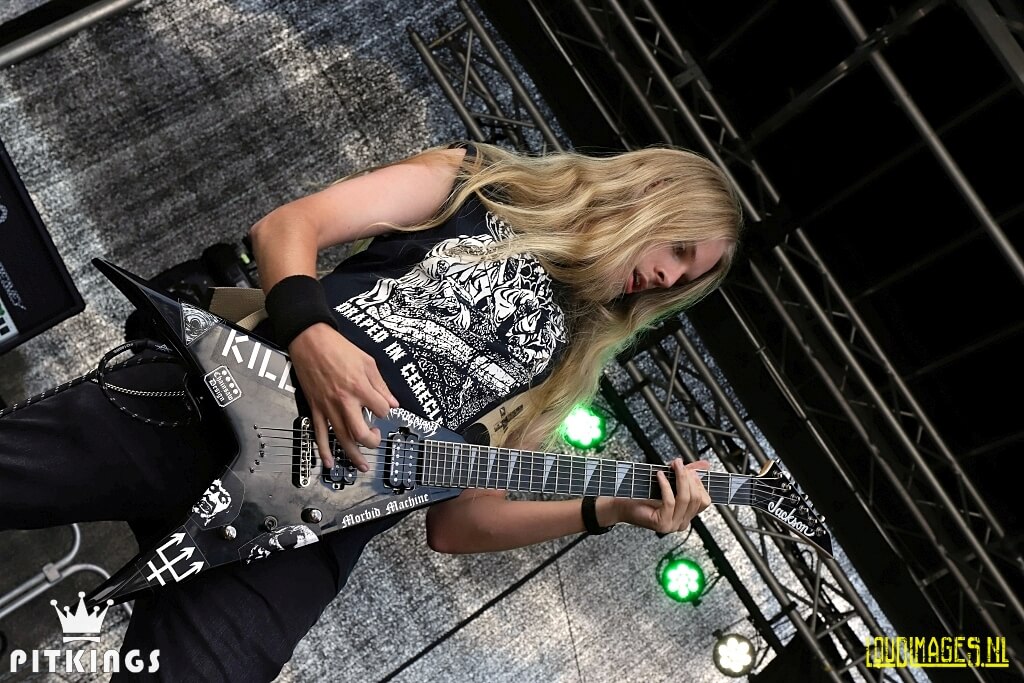 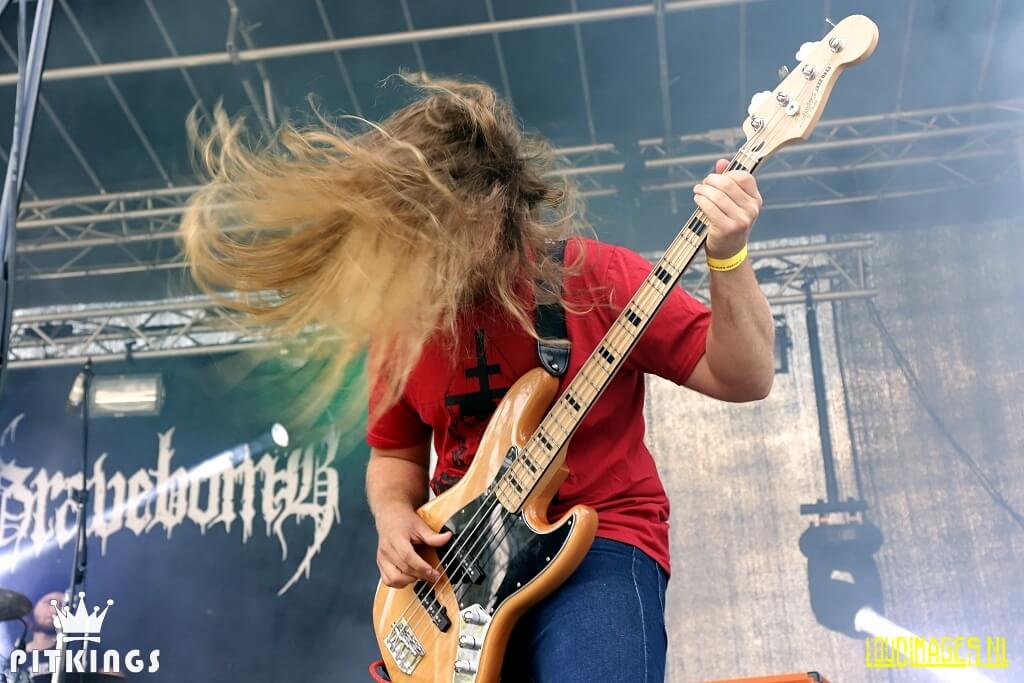 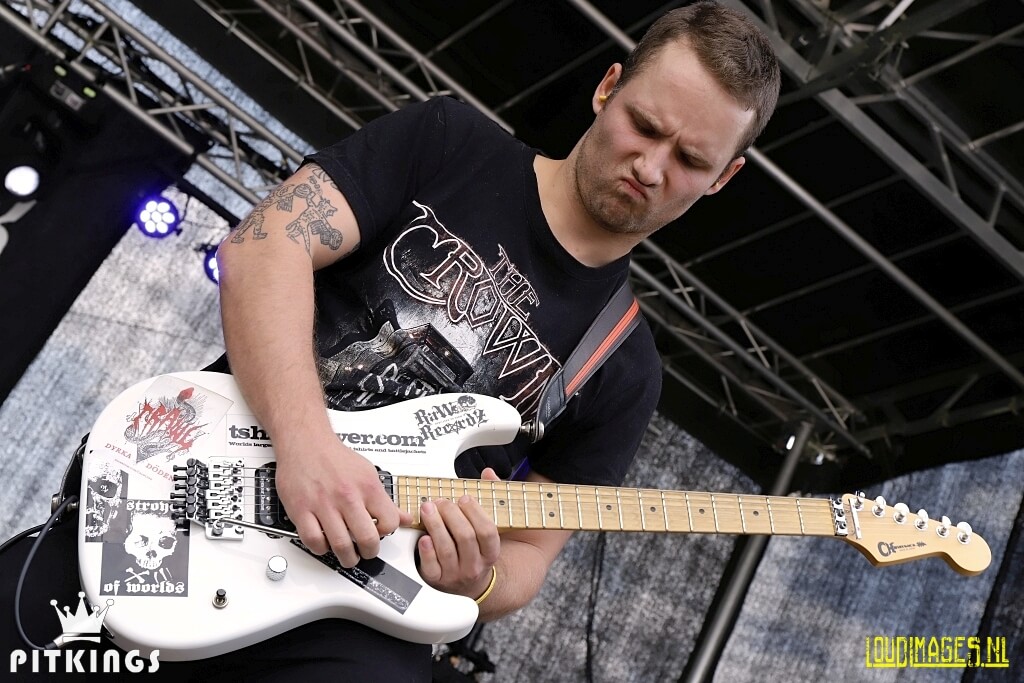 Gravestone (SWE)
Gravestone takes their time to soundcheck, as did Gravebomb so there is a small delay in the program. When Gravestone starts their set, it is quite energetic for death metal. The band is interacting with the audience quite a lot and they get the response they deserve. The space in front of the stage is filled nicely now and there is quite a party going on. I guess everyone on this festival is now awake and so is the neighbourhood, I presume. Again a quite melodic death metal band and I am not complaining! The only odd thing is, that the strobe lights make the speakers click with every strobe.

With a beer in the sun, Schoonebeek DeathFest is not a bad place to be! It is getting busy, but there is more than enough room left for everybody to move about. There are throughout the day places to sit available on the benches for those who would like to take a load off, or just sit and chat. 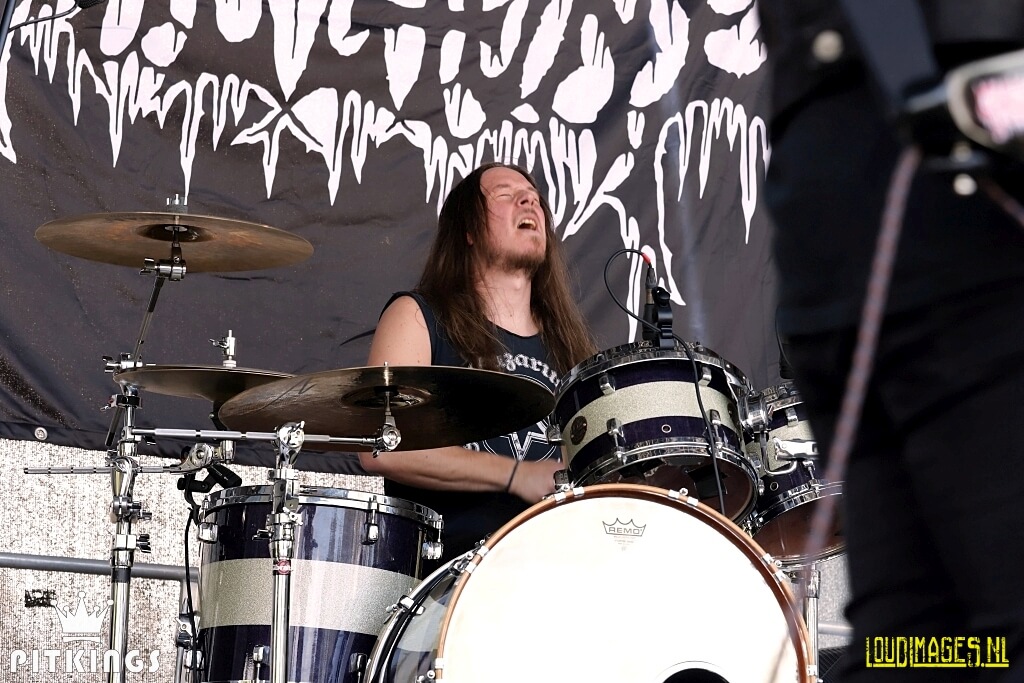 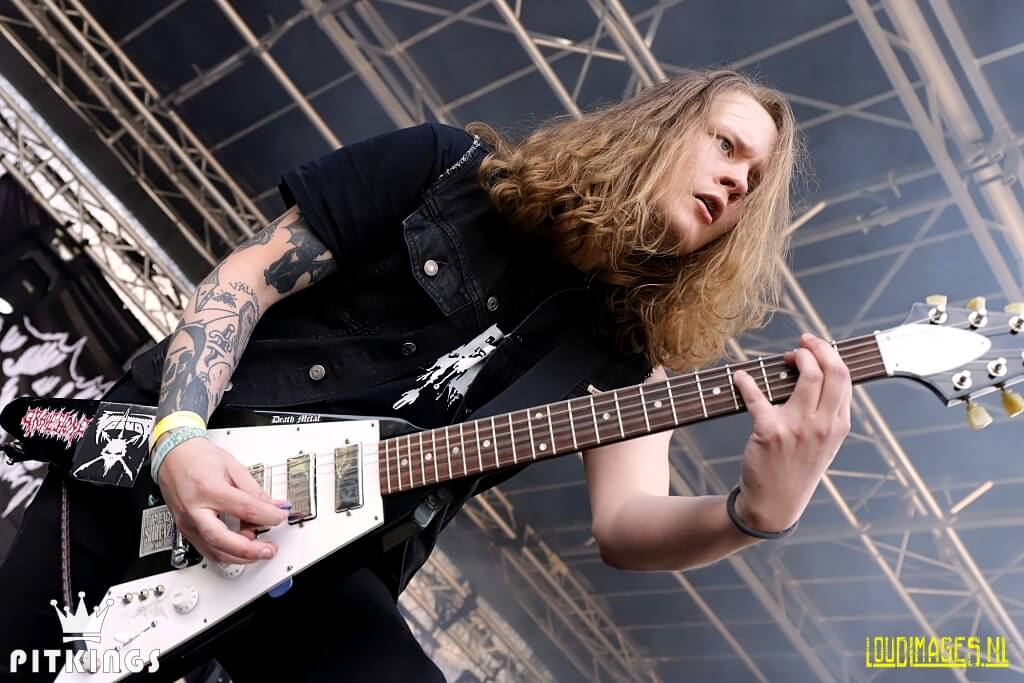 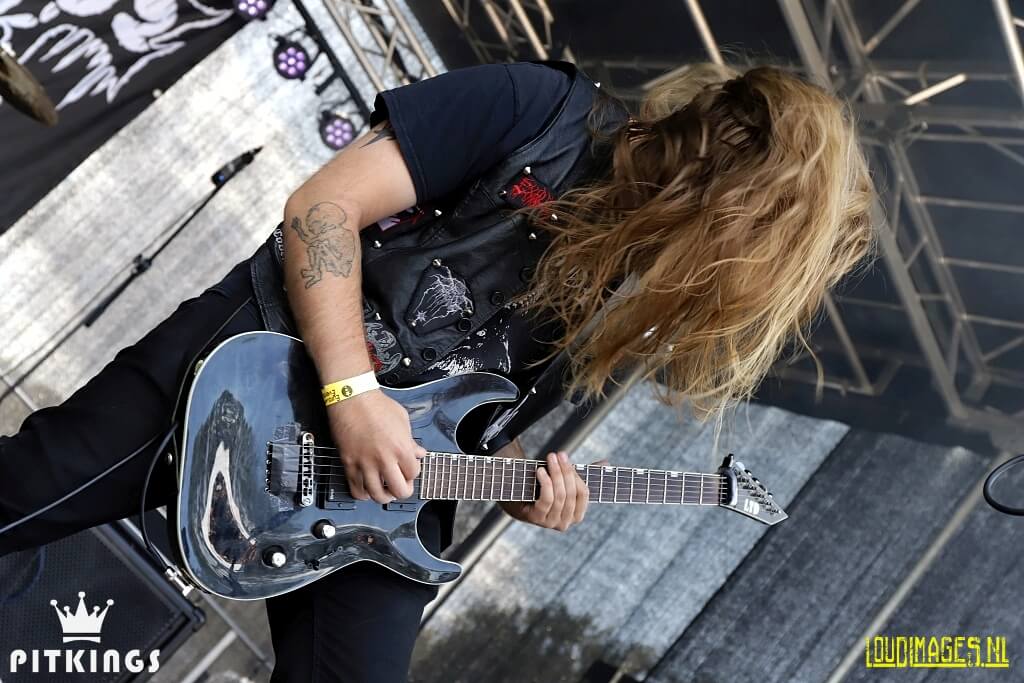 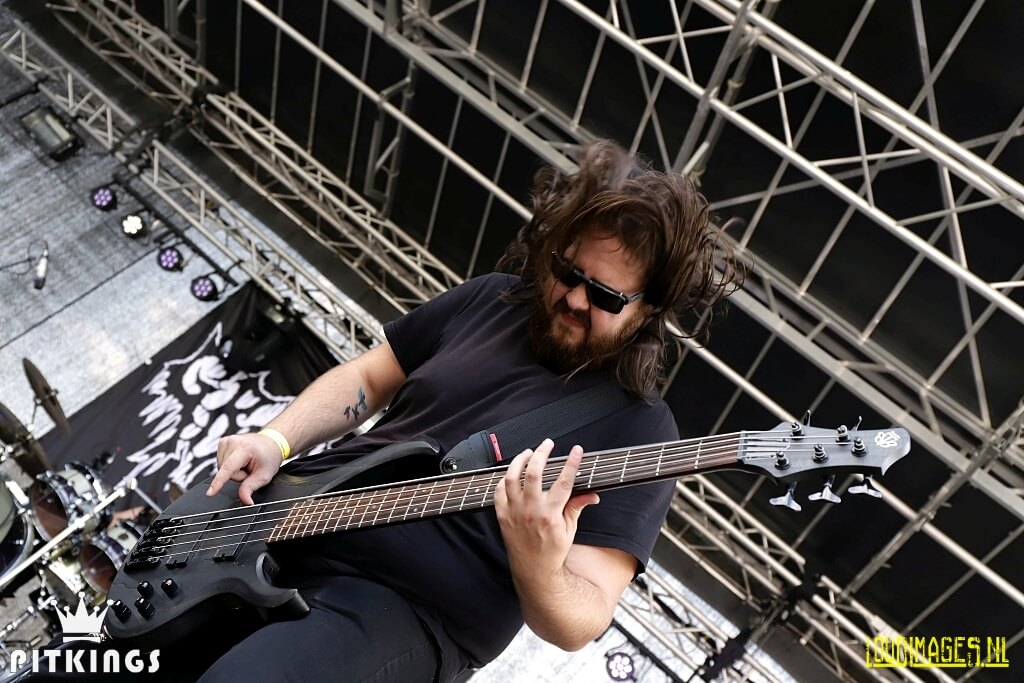 Graceless (NL)
This band brought along a truck load of fans, so it seems. There is a great atmosphere, the great weather is perfect and Schoonebeek DeathFest had the wisdom to change the beer to Hertog Jan… a wise and tasty decision! I’m not sure if this has something to do with it, but the set of Graceless is nothing less dan superb. There is a lot of interaction with the crowd, and with serious headbanging going on, this is a great performance which passes by much too soon. All songs are really well put together, but the last song of their set is my personal favourite. The break and the following solo brings pleasure to my ears.

Singer Remco Kreft thanks Raimon Wolters and his wife Miranda for a stellar party and their awesome record label dedicated to old school death metal. A huge roar from the crowd supports his words! 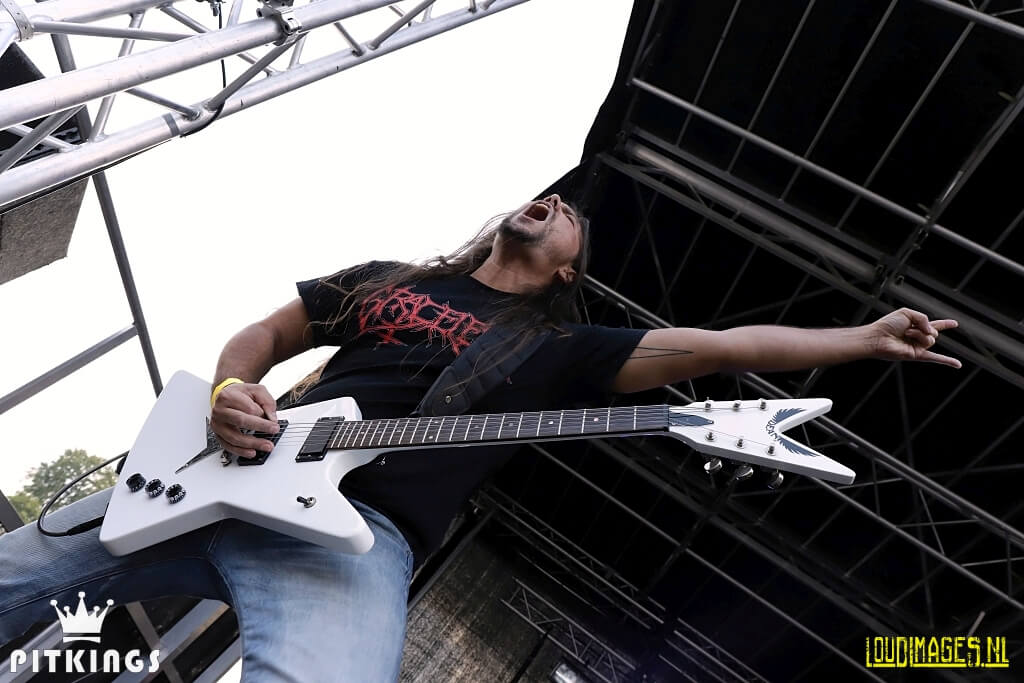 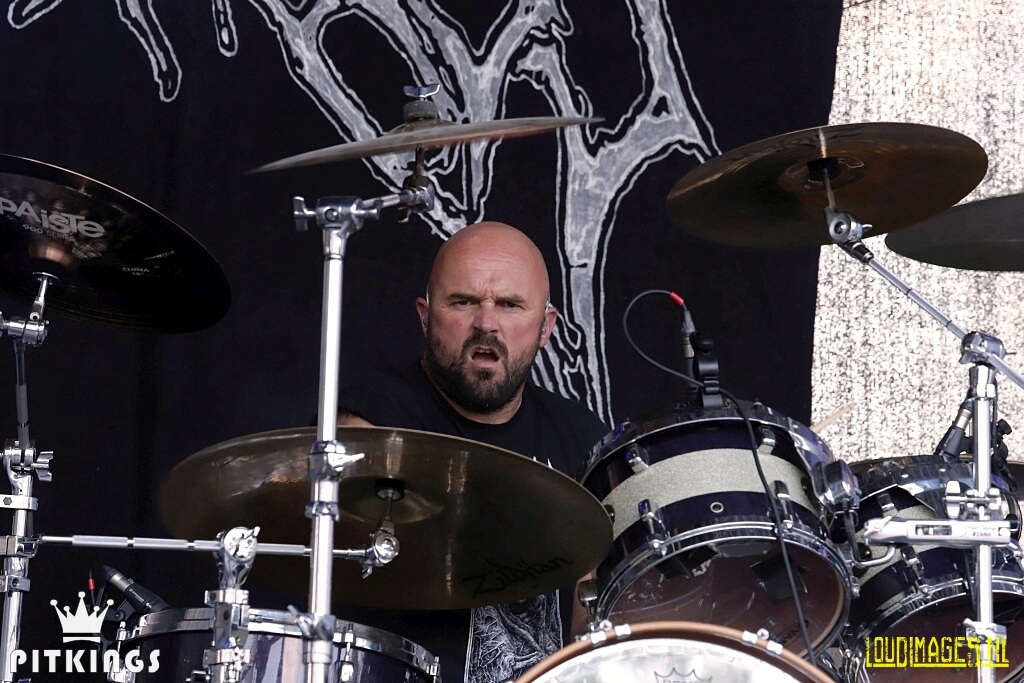 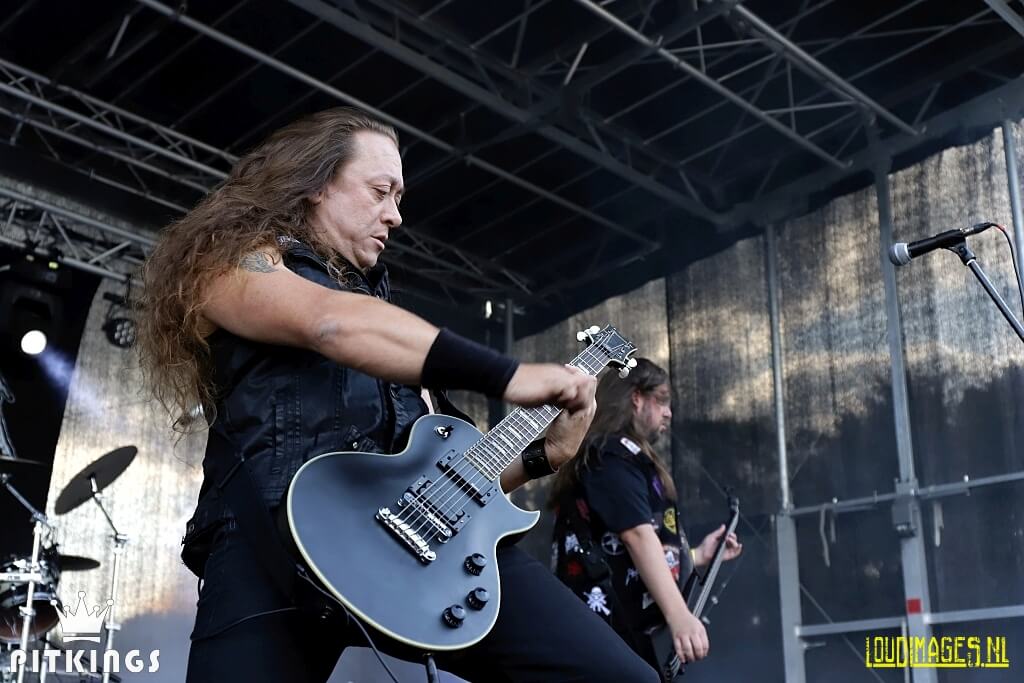 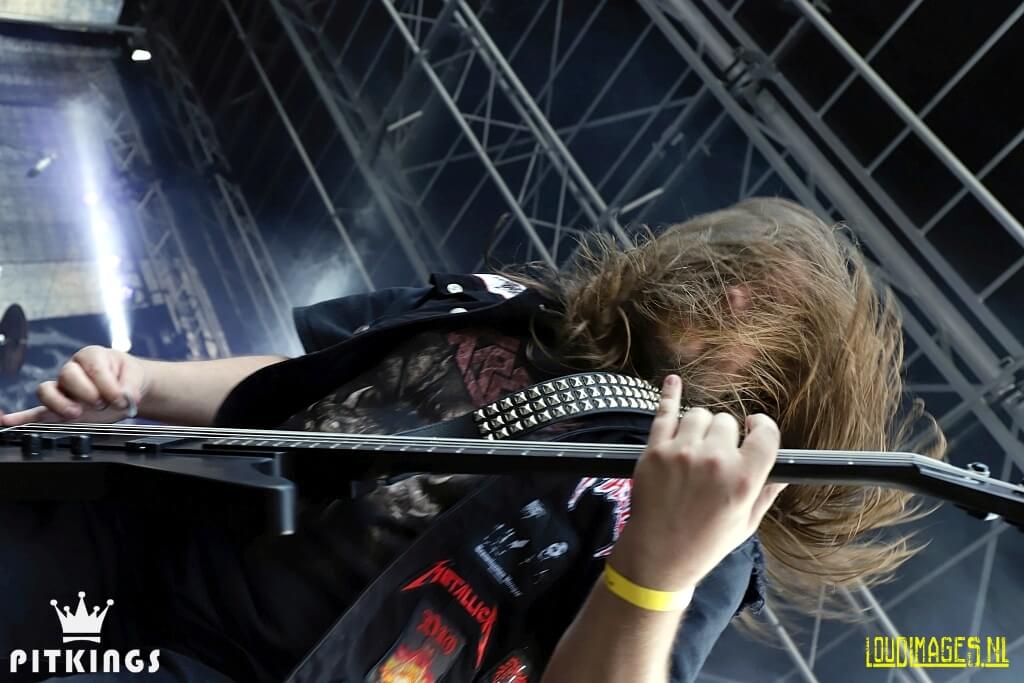 Departed Souls (NL)
Next up is the most unsympathetic band of the day. Luckily it is going to be their last gig ever for this lot and with a performance like the one today, that might not be such a bad idea. Singer, festival organizer and owner of record label Rawskull Recordz Rai is messing up at times and so is the rest of the band. Nevertheless the spirits are high and everybody is having a laugh, on stage and off stage. In between the musical-hiccups it could have been enjoyable, but the sound system is malfunctioning and that might be the cause of some(!) of the hiccups ;-).

The band is having a blast and the crowd is loving it. Instead of interaction with the crowd, there are complete conversations with the crowd and although prohibited, one die-hard fan grabs the opportunity to stage dive. He misses the barrier by an inch or 2 and is safely caught by the crowd. The atmosphere is relaxed and fun is the bigger factor of this performance than perfection. It’s striking how enthusiast the audience is and the cheers and applause when the set of Departed Souls is over is nearly deafening. Are they happy too this band has come to an end? Singer Rai is clear about it: I hope to never see you lot again! Probably not the best gig of the day, but definitely the most hilarious one with some pretty decent old school death metal in between. 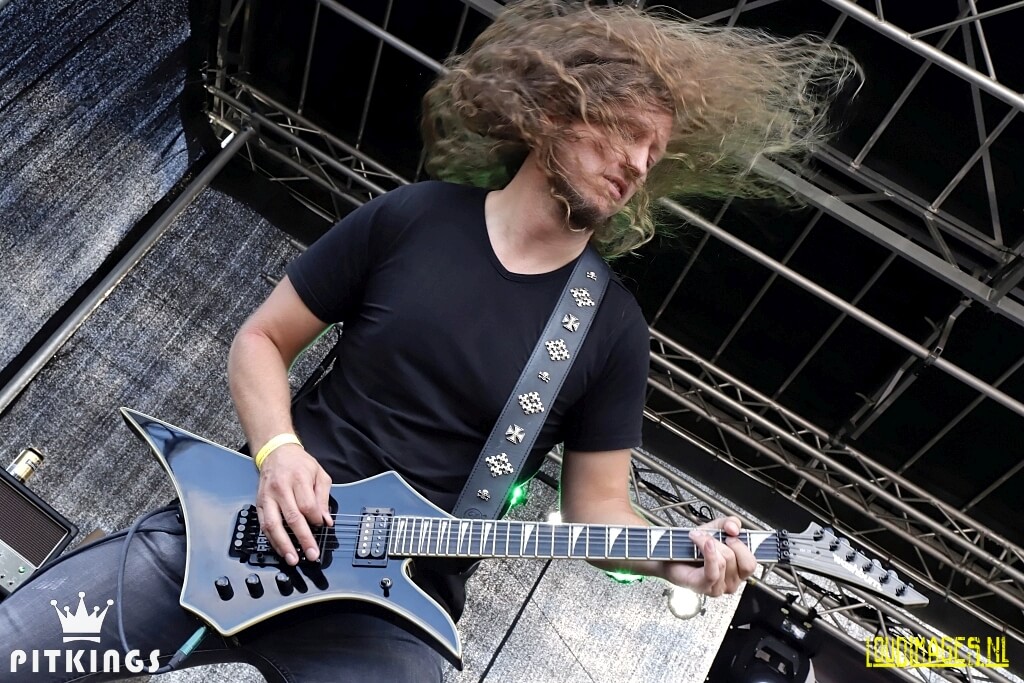 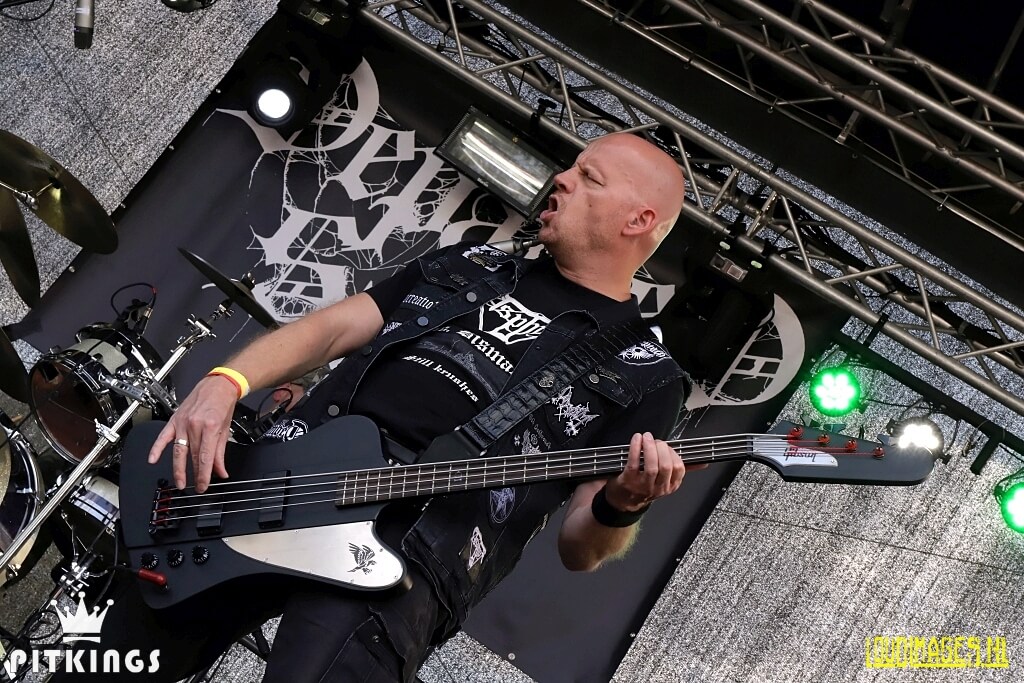 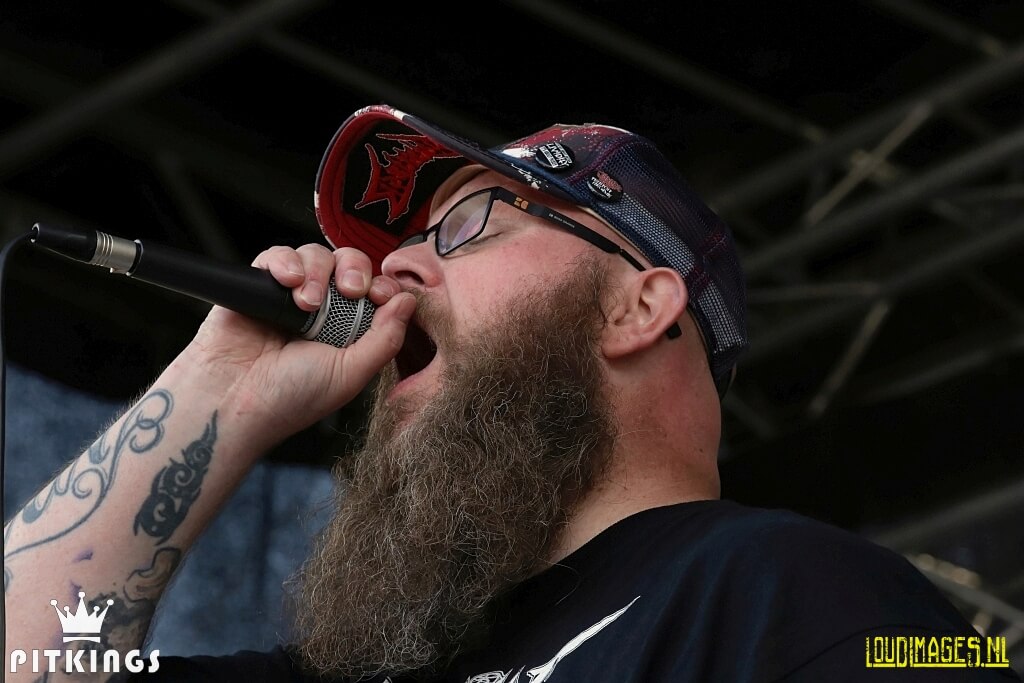 Phrenelith (DK)
Disaster strikes when Phrenelith is doing their soundcheck. The stage monitors seem cross wired and so seen the microphones. With angelic (no pun intended) patience the band is waiting for their turn and let the sound guys sort it out. The only sane decision is taken and the mixing table is reset and re-programmed. This takes some time and about 45 minutes later than de schedule says it is time to start again and Phrenelith is not complaining. Whith everything fixed, the sound is way way better than before. Phrenelith plays the kind of death metal I do not enjoy much, but I am the only one on these grounds, so I am not going to say anything bad about them. The people in front of the stage are having a blast and the sound this band generates is quite well defined and fast. This band deserves huge respect for not walking of the stage and play are more than decent set after the long wait and crappy first soundcheck. 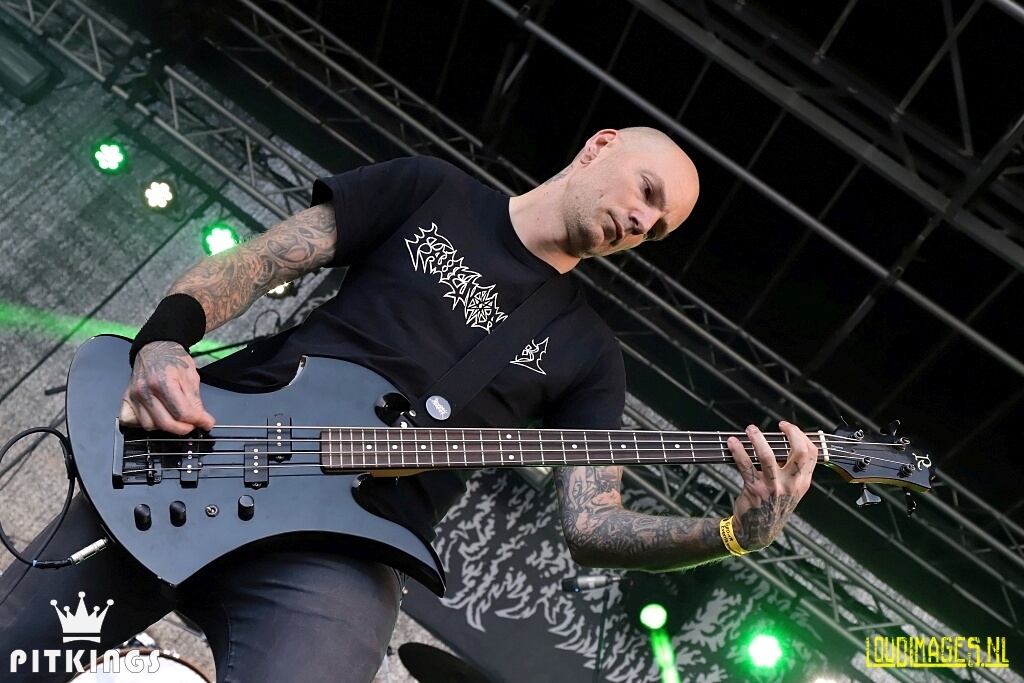 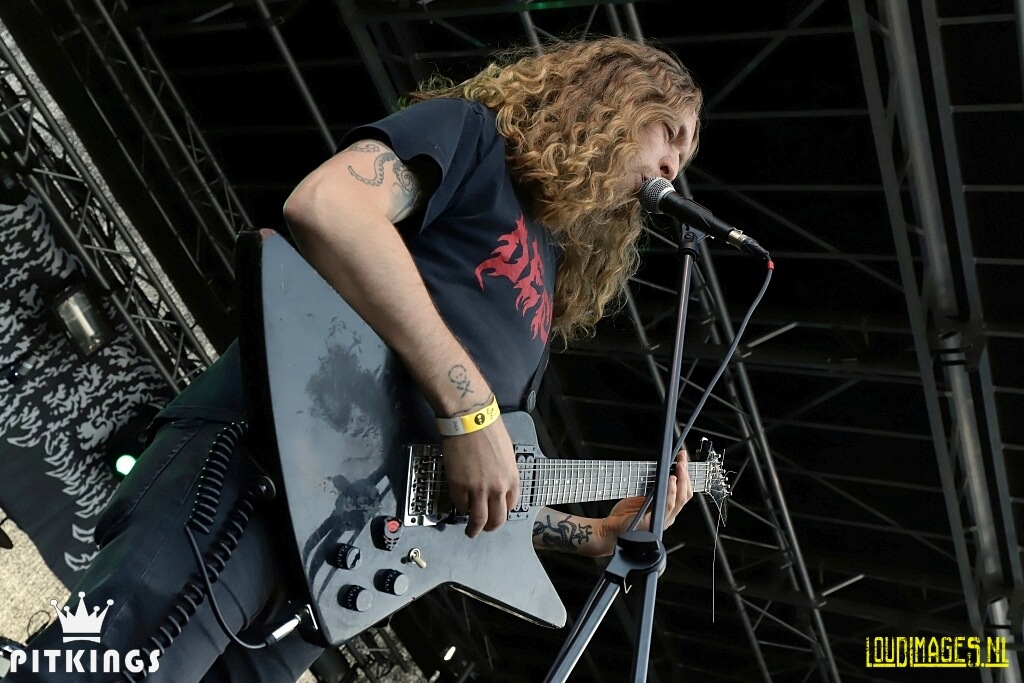 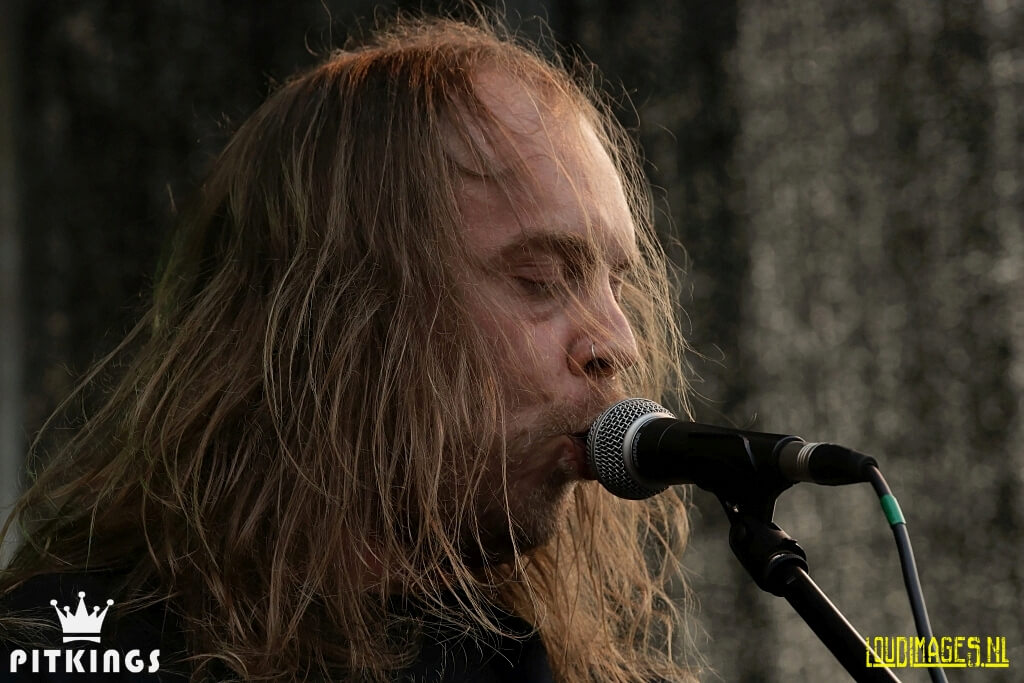 Burial (NL)
Some people are leaving already and it is getting a bit chilly now the sun is behind the trees. On the stage Burial is playing a tight-as-hell set. The sound is awesome and so is the light! Who would have thought, that during a death metal festival I would compliment the organisers with the great light! I really enjoy the set of Burial, but it is time to put on my coat, so I stand in the back of the terrain and have a chat with the tunes of Burial in the not-so background. I hear the festival is sold out and that is good news! I assume the revenues of the bar are not bad either, so I guess this festival is a success! 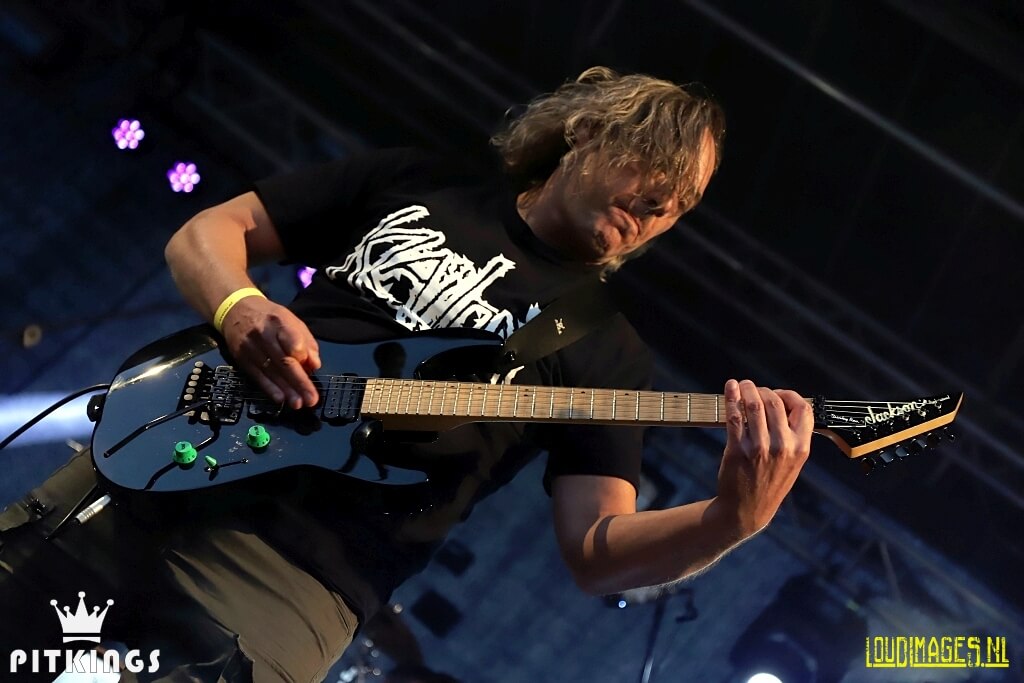 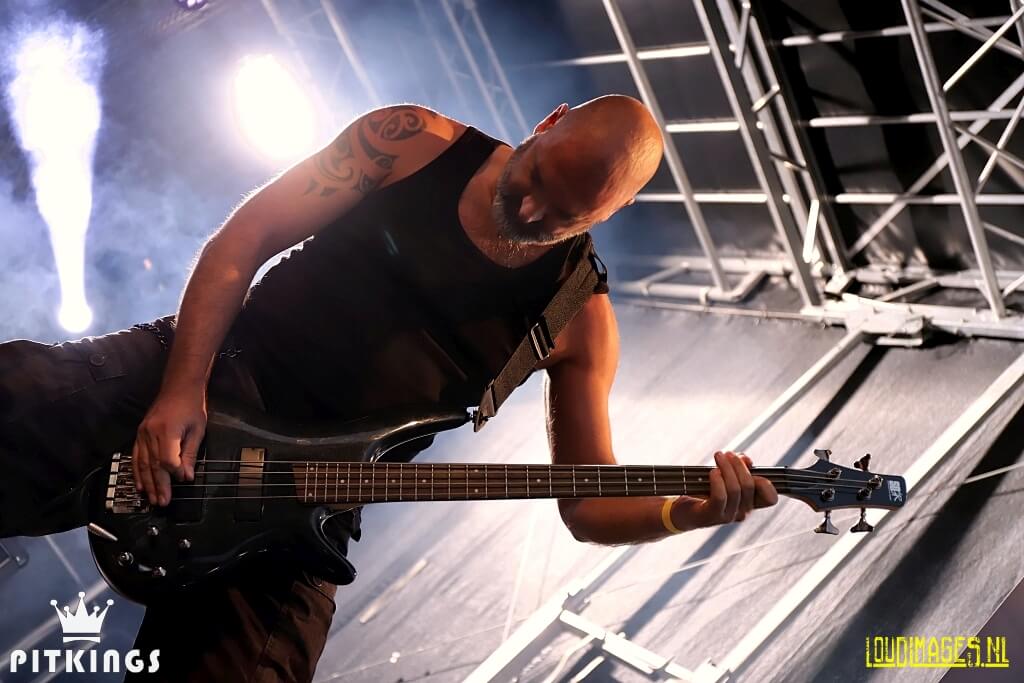 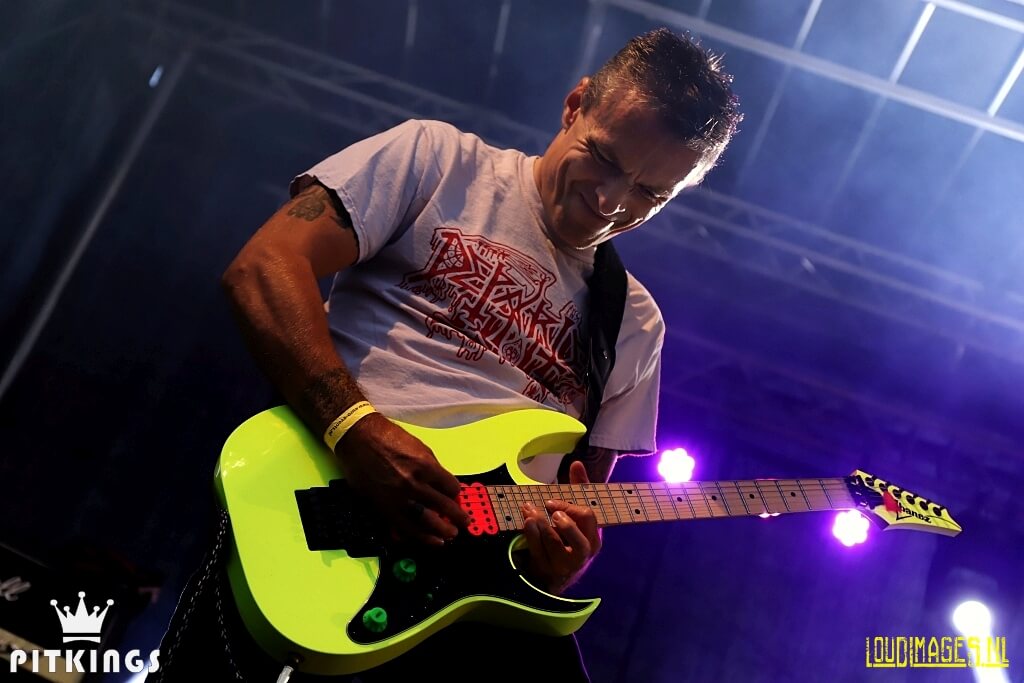 Entrails (SWE)
Entrails is a really old, old school death metal, which origins go back to 1990 and underwent rejuvenation in the recent years. This band is by far the most popular band of the festival and they really do kick ass from the very first minute.
Singer Pontus is perfectly warmed up, as he played earlier this day with his other band Gravestone. The style is blunt, loud and catchy at times and isn’t in anyway less than the original line-up and measuring by the size of the moshpit, this is the band of the day! It is pretty dark now and the lights on the stage contribute greatly to the atmosphere of the festival and the band. Only the spotlight at the entrance is spoiling it a bit, but security had to do their job too. When the last tones die in the night, there is a collective feeling of awe. This was a gig to remember! 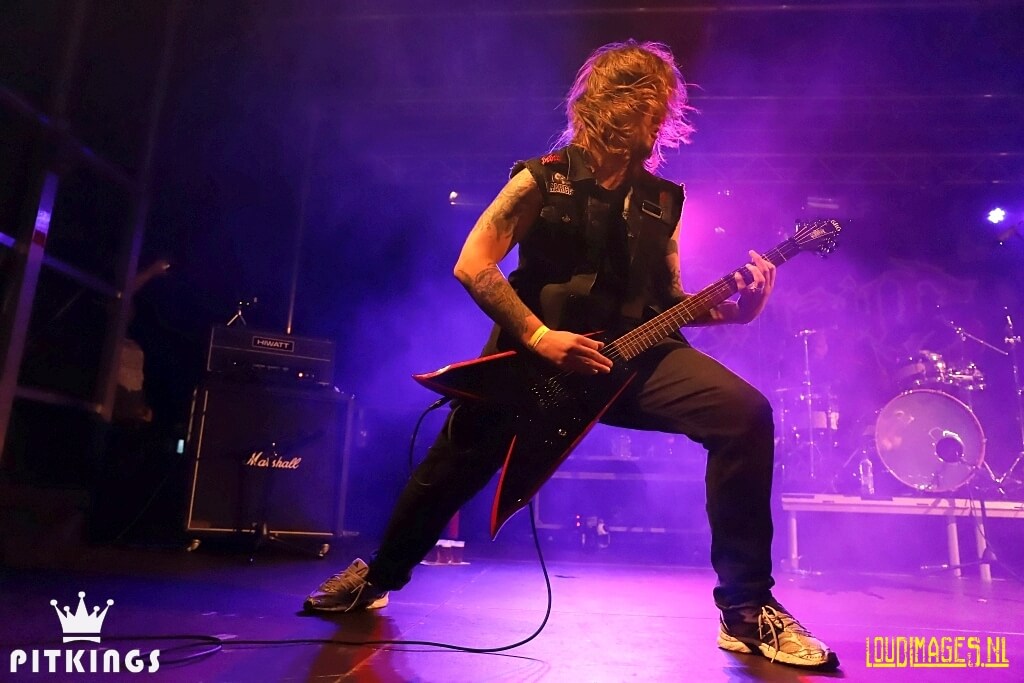 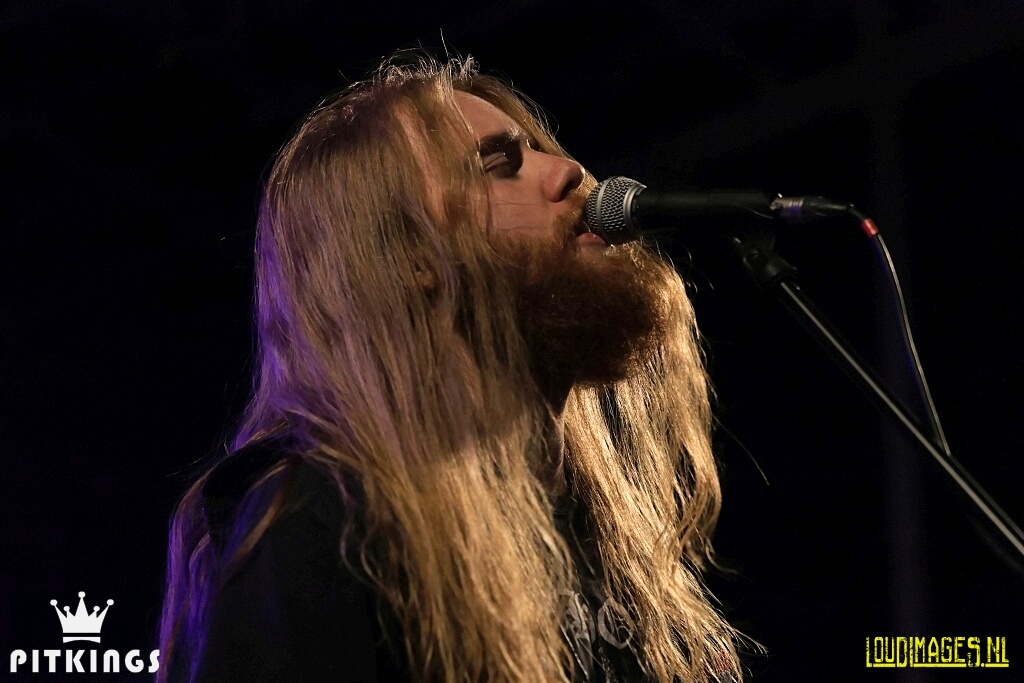 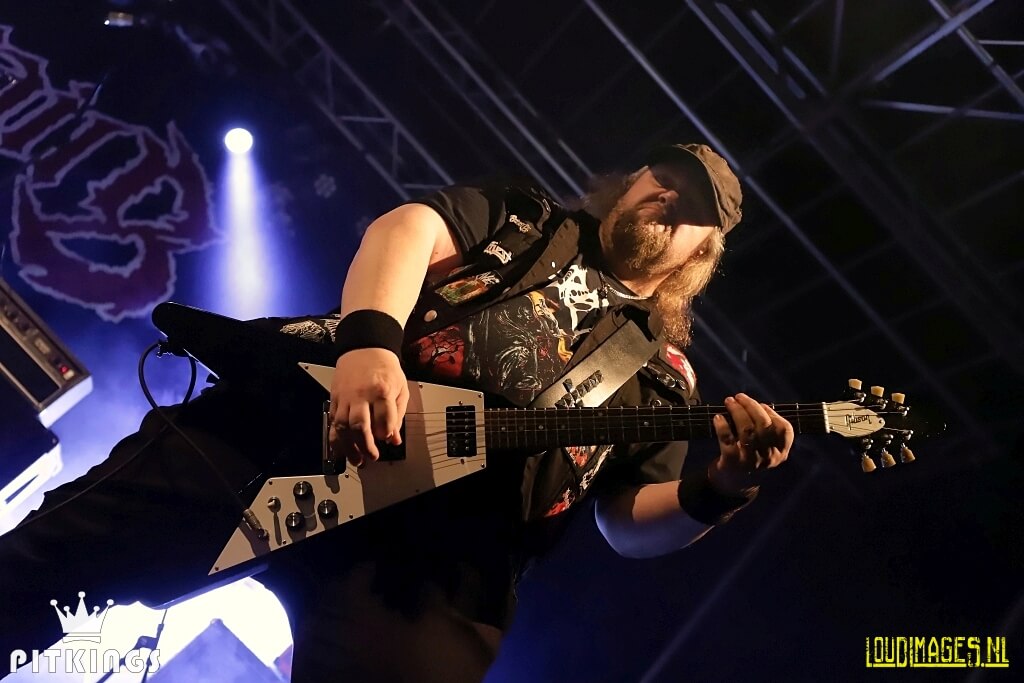 General Surgery (SWE)
Last but not least is General Surgery. This band is performing 30 years according to singer Erik Sahlström and is a bit of the stranger in our midst. General Surgery is different, as it incorporates grindcore with death metal. It’s a bit like Carcass, but the show of General Surgery is better. They share the love of the light with Carcass and I can only appreciate that. 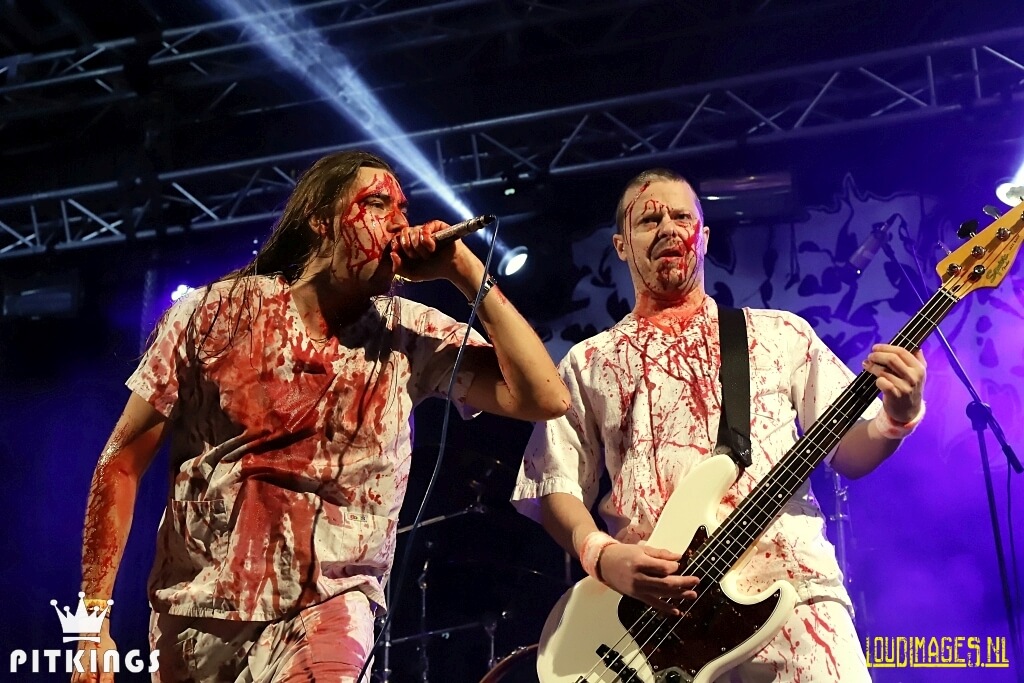 I don’t know if they always had this kind of show, but there is a great difference to the gentle guys on stage during the sound check and the maniacs with their blooded faces and clothing during their gig. A lot of people are gone already and they miss out a great show of a great band. Only drummer Andreas Mitroulis is sitting in one place, but the rest of the band is all over the place, pacing in a manic way across the stage. Especially Singer Erik walks manically from left to right and from right to left and when he stops, he stands on the edge of the stage to sing and cheer on the crowd (and leaking blood on the photographers)! The performance is rather funny, but it’s not just funny alone. The music is well thought trough and even though the do not perform that much, the band is well attuned to one another. When I walk to the parking lot some 500 meters down the road, the tunes of General Surgery are very audible throughout the walk. Those lucky bastards in Schoonebeek, for getting to listen for free to a great festival! 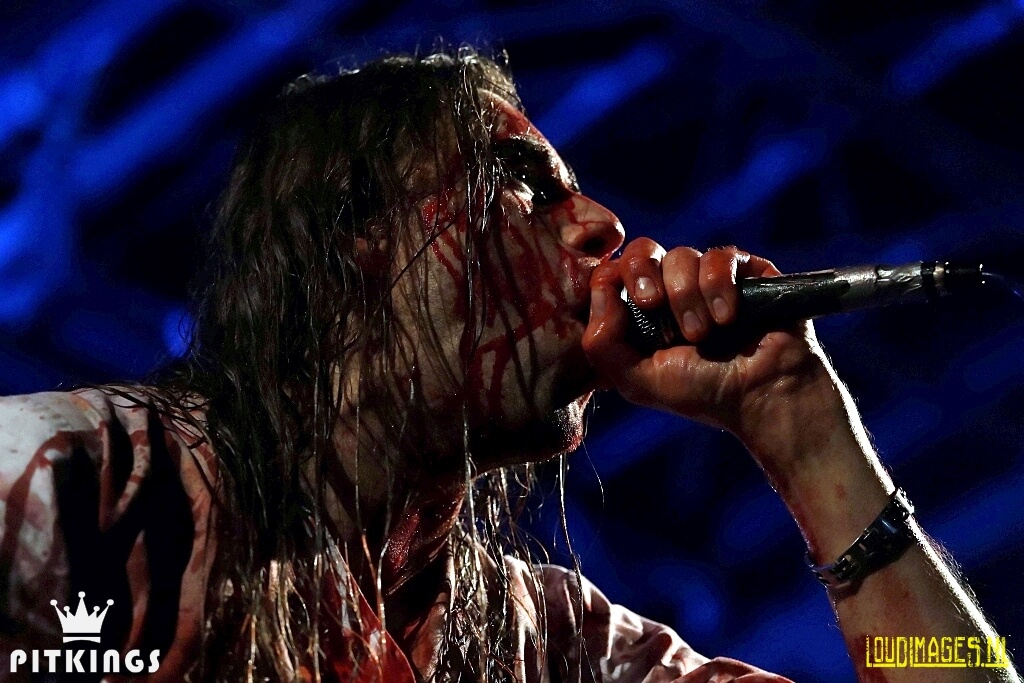 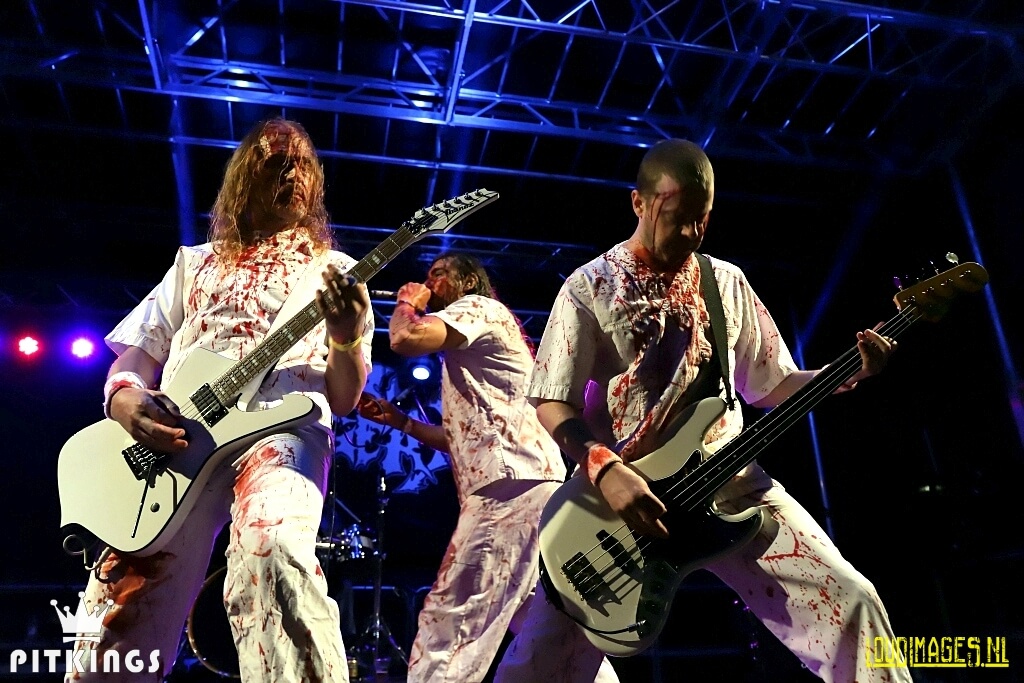 Conclusion
This little festival is truly a gem. Even if you’re not the biggest death metal fan like me, there is still more than enough to enjoy here; metal, beer, friends and perfect weather. It’s probably the most relaxed festival and it is worth to drive to Schoonebeek for it. The people are not only friendly, the majority is well behaved too! There was hardly any littering and the thrash containers were filled. Now that’s an upbringing! I’m coming back next year!