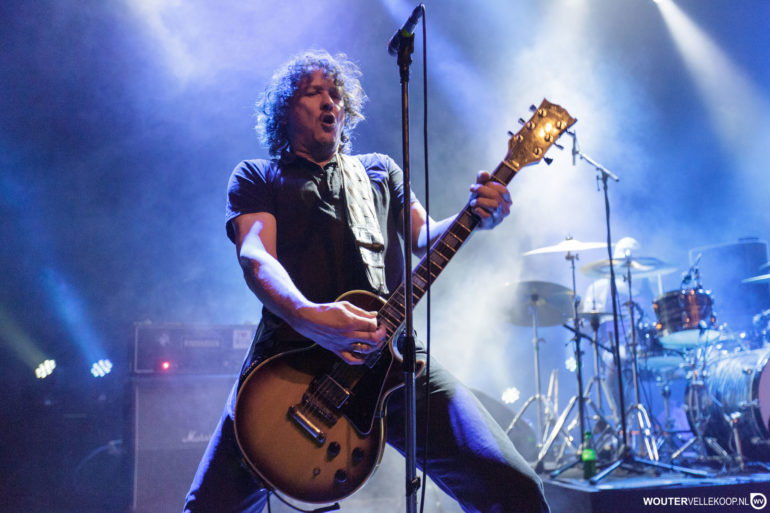 April 8, 2016 | Gebr. De Nobel, Leiden – The Dutch ‘speedrockers’ from Peter Pan Speedrock don’t need any introduction. For over two decades they dash through the various stages and festivals. The guys from Eindhoven have already played in many venues. But everything comes to an end. The band quits after so many years, but not without a farewell tour. On the 8th of April they played in Gebr. De Nobel, Leiden with support acts Tony Clifton, Deathroll and old school UK punkers The Exploited. Thanks Wouter Vellekoop for the great pictures!

Tony Clifton (NL)
The first band, Tony Clifton, climbs the stage before the venue was packed. The Dutch band is founded in 2013 and plays pop punk since then. Even though there weren’t many people, the band played an amazing set. The vocals of Mees Kamsma are typical punk and the other members stand in row. The visitors are standing still, beer in their hands. It’s pretty clear everyone is coming for the other bands, but wants to listen to the support-acts as well. Deathroll (SWE)
After a short break it’s time for Deathroll. With members of Disturbance, Fuzzbrats en Bloodsphere, it’s promised to be a good show. After a few minutes it’s clear: the craziness of punk takes over. They’re moving the whole time and even the crowd starts to move a little. There are also more visitors now. And justified: this band is worth watching. With an evening of punk and rock it’s pretty clear that Deathroll can’t miss out on the line-up. The crowd is warmed up for the upcoming bands. The Exploited (UK)
When we talk about The Exploited the crazy mohawk of singer Mattie Buchan comes up. When entering the stage, it’s clear that the mohawk is still the same: red and big. The venue is now fully occupied and a large moshpit starts. The old songs come along and everyone is screaming in the microphone, which is surprisingly often at the crowd. But some old songs are played differently nowadays. ‘Troops of Tomorrow’, in the beginning a very slow song, is played very fast and ‘Dead Cities’ a bit slower. But ‘Punk’s Not Dead’ and ‘Fuck The USA’ are still the same and everyone’s screaming along. The crowd even get there minute of shine on stage with the band at ‘Sex and Violence’, where they’re partying and moshing as well. Yep, The Exploited is still were we expect them to be. A big chaos, but very entertaining. Peter Pan Speedrock (NL)
Then it’s time for the band most of the people were waiting for. Peter Pan Speedrock turns this place within no time upside down. We can hear why this band is the rock machine of Brabant: everything is hard, tight and clear. The band is smiling and has a lot of interaction with the crowd. There are a lot of fans who literally can scream along with the lyrics. Fists going into the air, moshpits are starting and everyone, including the band, has a lot of fun. But some of the visitors has left earlier, so it’s not completely full anymore. Nevertheless beer and people are flying through the air. The band plays one of their best shows so far and keeps everyone’s attention till the very end. Peter Pan played an amazing and entertaining show and the musical delights aren’t being unseen. A party with great music tonight!