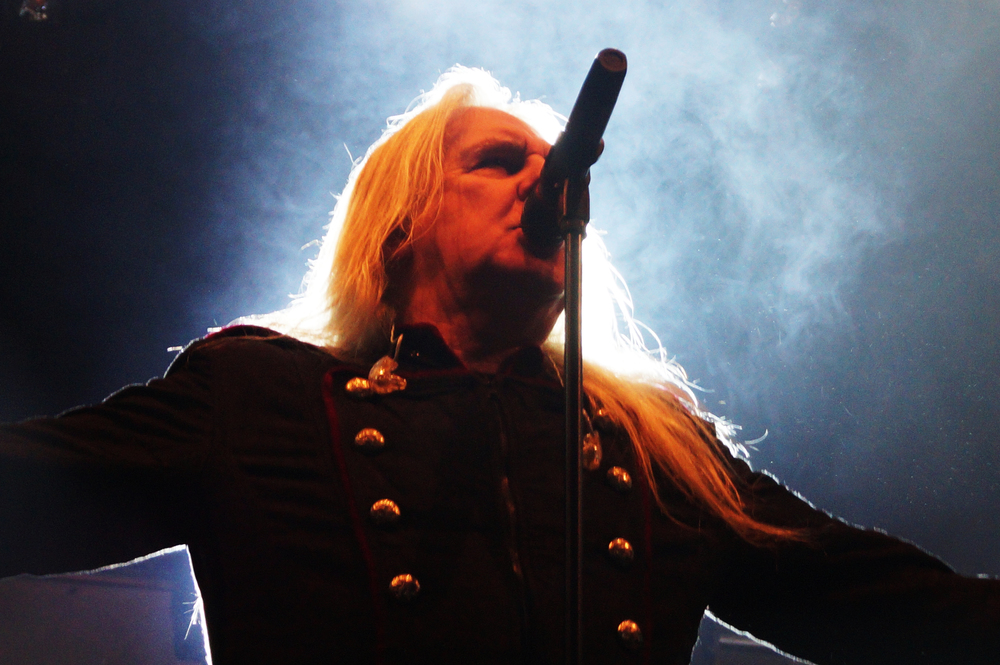 April 4, 2015 | Paaspop 2015, Schijndel – A new day at Paaspop, with free parking and lots of beer. This time with bands like The Deaf, John Coffey, Lacuna Coil, Shaking Godspeed, Within Temptation, Saxon, Sick Of It All and the last show of Vanderbuyst. Read more about day 1 and day 3.

The Deaf
After a freezing cold night it was for the Dutch Garage/Rock n Roll band The Deaf, fronted by Spike who we know from Di-rect. The audience was still a little frozen. The Deaf gave a good performance, the audience was still a bit sleepy. From start till end the band smiled, but were also very concentrated. They love being on stage and showed it to the crowd. The Phoenix was almost full. A lot of people were still sleepy, but also very enthusiastic. They clapped, danced and sang. The band was feeling their enthusiasm and smiled even more. A good opener for Pitkings on the second day of Paaspop.

Shaking Godspeed
After a small break we headed over to the Thunderbolt for Shaking Godspeed. A totally different band, but also with a lot of energy in their own way. Slow and fast alternated each other, the crowd drank another beer and listened to the music quietly. The music of Shaking Godspeed isn’t to define. It’s a lot of different styles, like hardrock and metal. But it’s definitely worth listening to.

Therapy?
On to the third band of this day: Therapy?. The Phoenix is half filled when this band started playing, but there’s a lot of press. It’s a band that knows how to rock. The people who were there created a small moshpit. The band enjoyed playing and gave their energy to the crowd. A quite dark stage didn’t bother them to keep watching. The band rocked, gave a good show and the public is pleased.

John Coffey
An hour later John Coffey climbed the stage in the Phoenix. The band started with some slow songs, but after a while they played their typical hard songs. They mostly played songs from their new album like ‘Heart Of a Traitor’, ‘Son’ and ‘Broke Neck’ but also songs from their previous album like ‘Featherless Redheads’, ‘Romans’ and ‘Oh, Oh, Calamity’. Then the crowd was really moving. Beer was flying through the air and when the band asked for a circle pit the party started. Moshpit after moshpit started and the band loved it. Still the band was a bit reserved and the show wasn’t as good as it normally is. The crowd didn’t seem to bother and after an hour the show is done.

Within Temptation
Even though John Coffey wasn’t finished playing we headed over to the Apollo stage for Within Temptation. The Apollo was full, which wasn’t a big surprise. This band exists for more than 15 years and is still going strong. A lot of new songs were on the setlist this evening. But ofcourse some old, like Stand My Ground, couldn’t held back. The show wasn’t as theatric as the rest of their tour with a lot of effects. But the band made it just as good as their theatre tour, which is now going on. The voice of Sharon you can only describe as amazing. It’s as clear as can be. It’s definitely the best show of this day.

Lacuna Coil
A band the same as Within Temptation is Lacuna Coil. But contrary to Within Temptation this band didn’t play on the mainstage but in the Phoenix. On a small stage they gave them all. Clear voices, duets, good guitar riffs and hard drums bejeweled the show. Most of the songs were of the older albums, but they also played some new ones. The band still has a lot of fans, who were there to see Lacuna Coil play. The stage was quite dark, which fits perfectly on the band. Mysterious, dark songs were the only things we were going to see and hear this evening. Just one word: wow.

Vanderbuyst
Even a goodbye deserves a party. Vanderbuyst quits this year and this show was the last one they were playing. Fans were standing in line to go inside the Thunderbolt. Everyone wanted to see them play one last time. And it was all worth waiting for. A smiling band, concentrated to play the songs well and a lot of interaction were the main things of this show. It was tight, good guitar play and drums and an amazing voice. After seeing this show everyone is going to miss this band. The crowd has got what they wanted and the band is content.

Saxon
The old men of Saxon are still going strong. Even after almost 40 years they’re not getting enough of being on stage. This British heavy metal band are like a fine wine, it gets better with age. With songs like ‘Wheels of Steel’, ‘Princess of The Night’ and ‘Crusader’. Saxon puts down a great set and pleased all the older generation as well as the younger. That they love playing is for sure. This heavy metal band played late in the evening, but the Phoenix is filled. Everyone came to see them play. The band still has a lot of energy. They were running on the stage, kept entertaining the crowd. For those who doesn’t know them: you certainly miss something in your life. The show was great, voice and music are well-fitted. Everything seemed to be in balance.

Sick Of It All
With Sick Of It All the second day of Paaspop ended for Pitkings. This was a band most of the rock/metal fans were waiting for this day. The Phoenix was overloaded, moshpits were there from the beginning of the show till the end. Sick Of It All started in 1986 and is now one of the greatest hardcore bands from the USA. This evening they proved why they were still worth seeing with a very tight and energetic show. A super-energetic attitude resulted in big mosh pits and beer flying through the air. Sick of it All closed the evening with a fine set with a mix of old school songs and newer works. For everyone who wasn’t there: go check them out sometime!

Also the second day of Paaspop was a success. A great day with awesome quality bands. On to the last day!