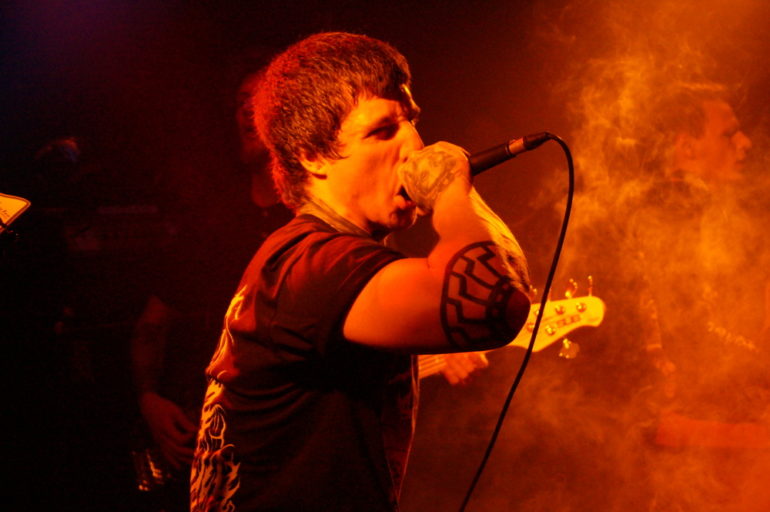 April 17-19, 2015 | 013, Tilburg – There it was. The great last edition of Neurotic Deathfest at 013, Tilburg. A whole weekend with the most extreme metal bands of this moment. A lot of death metal lovers came to the 013 in Tilburg to party one last time with a weekend full of death metal. Tessa was there to write a review about it and took some pics.

Soulburn
The first day of Neurotic Deathfest started with Soulburn on the Mainstage. This dark grimm metal band from Holland didn’t have a lot of interaction with the public. But the show they gave was worth watching. A lot of new songs from the last album ‘The Suffocating Darkness’ came along. Even though they didn’t have that interaction, you could see that the guys feel home on the stage. They know what they’re doing and they’re doing that amazing. After a “Get drunk, goodbye” they left the dark stage.

Korpse
Then we’re headed over to the Secondstage for Korpse. When we arrived at the stage, it was to crowdy to actually stand in the hall. Most of the people were standing outside the hall to just hear a bit of the slam band. Too bad, because from outside at the bar you couldn’t hear the music clear enough to say it was ok. But by asking the people inside, it was definitely a party.

Morgoth
On the mainstage started Morgoth. This death metal band was from the beginning very mysterious. The hair of singer Karsten was hanging in his face the whole time. With a new album coming out this year called ‘Unfold’ it’s time to present the new music and members of the band. The stage was lighted with a lot of colors which made it even more mysterious. The guitar play, drums and bass were perfectly balanced. And amazing show to watch and grab some food.

Regurgitate Life
Right after Morgoth, Regurgitate Life started playing in the Secondstage. A lot of people were waiting in the hall early enough to see this onemanshow. With only a guitar Sammy Urwin climbed the stage. With all commitment he played every song. His guitar play is amazing, with a lot of energy and a lot of trics. It didn’t bother him that the hall was half empty. “It’s amazing you guys came to listen to my songs. Thanks”, was the only thing he was constantly saying. Even after the show he stayed to take some photos with the fans.

Nader Sadek
By entering the Mainstage, all you could see was trees on the stage. It was going to be a dazzling show of Nader Sadek. From the beginning you couldn’t see the front of the singers, which makes it sometimes like they didn’t want any interaction with the crowd. But also between the songs, they didn’t talk. After a few songs they didn’t even play or speak for almost 3 minutes. It made some of the people walk away. It was a very weird show, but the music and sound were good. Too bad no one was really excited after seeing the band.

Devourment
After a small break, watching the merch and grabbing some food, it was time for Devourment on the Mainstage. This was one of the bands a lot of people wanted to see this weekend. The sound was really good, but the guys didn’t seem to have a lot of fun performing. It wasn’t enjoyable to look at, which made it a little boring. But for the music: not boring at all. The guys know they’re good at what they’re doing and the crowd was having fun with a lot of moshpits. An amazing band in the early evening.

Sinister
The Dutch band Sinister was playing the Secondstage tonight. We did go early, missing the last part of the show of Devourment, to really see the guys perform. In the beginning it was very crowdy in the hall, but later in the show more and more people left to go to the Mainstage. The band was smiling the whole time, thanking the crowd for coming and they were happy to see some familiar faces. Maybe it wasn’t the best show they did, but by seeing them to love being on stage it made it all good. The crowd was a little calm, but the band wasn’t. They give them all.

Entombed A.D.
The last band for us on this first day of Neurotic Deathfest was Entombed A.D. This band was a less hard than the other bands on this evening, but that didn’t bother anyone. The Mainstage was totally filled to see this band. Everything fitted together: a good show, good lightning and an amazing show of the band itself. This headliner was a good closure for the first day of the last edition of NDF.

Gorod
This jazz metalband was definitely a good choise to go see on this day. Besides a good show, a smiling singer and bassplayer and good lightnig, the sound was the best at this show. No other band had the sound this good as Gorod. Back to the smiling singer and bassplayer. The smile didn’t left their face for the whole show, which made it really enjoyable to look at. The love for being on stage made the crowd have even more fun. The moshpits weren’t the greatest of Neurotic, but everyone was smiling.

Slaughter To Prevail
A different band than the others on Neurotic was Slaughter To Prevail. This band from Russia played Stage01 in the early evening. Even though Stage01 was always very crowdy you can walk around easily at this show. Most of the people who came to see this band were there just because they couldn’t fit in the Secondstage to see Kronos perform. There wasn’t a lot of response from the crowd. Even the band didn’t seem to have fun and were watching a little grumpy. When they asked the people for a moshpit only two ran to each other. This was definitely a total fiasco for this weekend.

Arcanius
Also in Stage01 was Acranius. In contrast to Slaughter To Prevail the hall was totally filled. You couldn’t almost move when the moshpit started. And mospits were definitely there. Everywhere you looked people where dancing, moshing and having fun. The band also seem to have fun. Their sound was amazing, everything fitted well together and they brought every song with a lot of passion. Definitely one of the better bands this weekend.

Bloodbath
Then it was time for another headliner of NDF. But this band wasn’t really what we had in mind. The sound was terrible. Instead of hearing the whole band, you could only hear the bass. All the other instruments and vocals were outvoted. Especially the guitars weren’t audible. Too bad, because it’s an amazing band to watch and party at.

Jig-Ai
After Bloodbath it was time for the last band of the evening: Jig-Ai. From the beginning it was really crowdy. Everyone was moshing, jumping and dancing and after two or three songs the stage was full of people. The band couldn’t move anymore, but they liked it. When everyone jumped of the stage, they asked the people to come back on it and party with them. From the balcony it was really enjoyable to look at. It was a great ending of the second day.

Hideous Divinity
Even though we looked forward seeing this band, Hideous Divinity wasn’t that fascinating. The band just stood there, doing their songs. The little interaction with the public couldn’t save the show.

Internal Bleeding
The second band, Internal Bleeding, we were watching was totally inversely. They did an amazing show, with a lot of good guitarplay. A moshpit started and everyone was smiling. This was how it’s supposed to be at the last day of Neurotic Deathfest. The interaction with the crowd was also there. They appreciated that everyone came to see them play on the Mainstage.

Incinerate
After a small break it was time for our last band this day: Incinerate. We had looked forward seeing this band perform on the last edition of Neurotic. But when we got into a full Secondstage and the band started the show it was pretty clear this wasn’t going to be an amazing show. The band had no clue what they were doing, looking at each other with every mistake they made and didn’t catch the attention of the band. Some of the people in the crowd were doing funny in the moshpit just to kill time and trying to make it a better evening. They already knew they wouldn’t fit in Stage01 to see Bleeding Utopia play, so they had to enjoy themselves here.

Too bad it wasn’t the ending we hoped for, but after all we had an amazing time at Neurotic Deathfest. With mixed feelings we left the 013, knowing this was the very last edition. No “See you next year”, but we have a lot of memories of this amazing last edition.