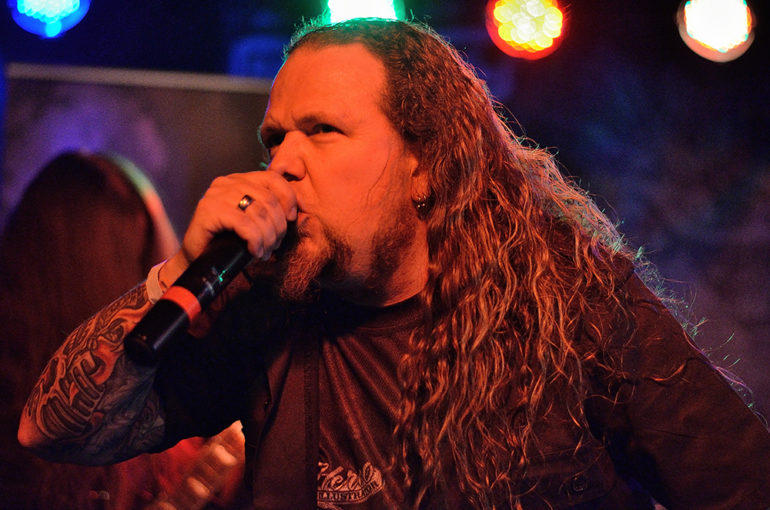 May 23, 2015 | Musicon, Den Haag – This year was the third edition of the Metalcon Festival. For the first time the festival was 2 days in a row and had some awesome bands on the bill. This review and pictures are from day 1, with the bands Sinister, Monolith Deathcult, Dictated, Cliteater, Ethereal, Grim Ordeal, Spartan and Variscythe.

Variscythe
Variscythe was the first to enter the stage. They play a mix of death and thrash metal and are a very energetic band. Although Metalcon was just filling up, these guys gave it their all to give a good show. And they succeeded, great music, tightly played, a joy to listen to.

Grim Ordeal
Next up was Grim Ordeal. Grim Ordeal come from Deventer and play a mix of thrash and groove metal. Slowly the venue was getting filled up, unfortunately a lot of people were watching from a distance. Even though the front of the venue was mostly empty, they played a tight show.

Spartan
Next up were Spartan. I have heard of these guys before, but had never seen them until now. And I can recommend anyone to go to a show of Spartan. The songs are based on greek mythology and soon battle melodies were filling the room. A mix of different kind of metal ranging from power metal to metalcore. As a guitar player myself, I really enjoyed all the guitar solo’s in the songs. The vocalist was the first that really tried to interact with the public and with all the tale telling stories, he gave a great performance, professionally talking a song into another.

Ethereal
Ethereal play melodic metal. Heavy, melodic, progressive are all terms that can be named with this band. The synth player is a true virtuoso and together with the guitar player they play some mean solo’s.

ClitEater
And then it was time for ClitEater. Grinding Deathrock as they call it themselves. Even though the vocalist had hurt his ribs recently, they gave a mighty performance. Clearly a band that has playing for years and knew how to get the public going. Inflattable crocodiles were flying through the crowd and most of the crowd was singing along with the tracks. A great show!

Dictated
Dictated was a band that I was really looking forward to. Brutal death metal that was going to give us eargasms, until during the first song the power in the venue went off. After a 20 minute break the show continued and it was a great energetic show. The vocalist really got the people to come closer to the stage and start moshpits. Great guitarwork from the 2 ladies as well. Definetly a band that I will go to again in the future.

Monolith Deathcult
Next up was the Monolith Deathcult. Supreme Avant Garde Death Metal they call their style. Again you can notice that this is a band with a lot of experience. The music they play is a great mix of different styles, complemented by loads of samples a growling vocals.

Sinister
The last band of the evening was Sinister. And Sinister is just Sinister. They just don’t disappoint. A great show, the venue was filled completely at the front and they really got the people going into moshpits.