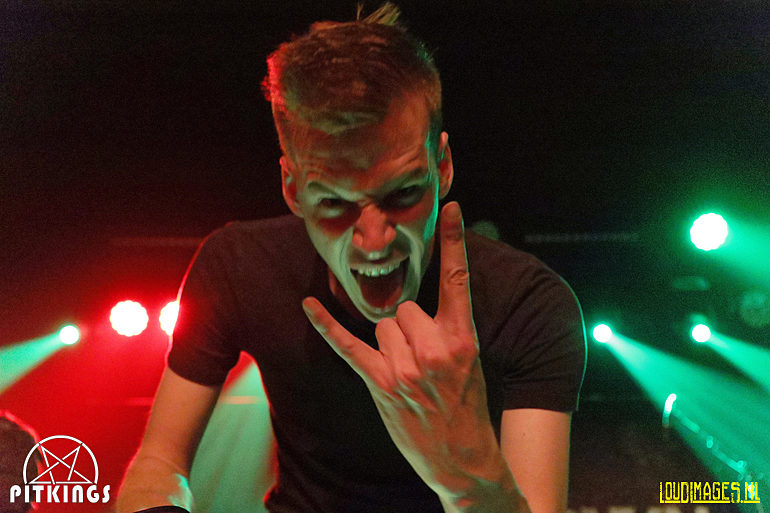 April 21, 2019 | Estrado Harderwijk – A last minute call made me decide to drive to Harderwijk for the Metal Battle finale with presenter of the evening Earik (singer of The Lucifer Principle and Killing Cult Society).
I followed the “veldslagen” from a distance and never came to it, to actually go and see these gigs with upcoming talents of Dutch metal. But this night I got the see the finest of all these bands in the grand finale in Estrado.

The Metal Battle is a tradition to help starting bands with gigs which can introduce them to a larger audience. As of this year the Wacken Metal Battle and the Metal Battle are combined. Therefor the prices for the winner appointed by the jury are staggering; performing at Stonehenge, Baroeg Open Air, Hemelvaart Metal Fest, Tattoo Fest, No sleep ‘till Wieleman, coaching by Guldemond Vocal Coaching, the Rock station and a recording at Into The Limelight records!

The choice of the audience will win a gig on Rocktober Fest, coaching by Cornerstone Audio and of course all these bands can count of the warm interest of Pitkings during their career!

With the simple announcement “We’re going to start”, the bar area cleared in an orderly fashion and the venue below filled with metal enthusiasts. Exactly on time the first band kicked off.

I decide to first watch a few minutes before taking pictures and I am pleasantly surprised by the enthusiastic start of this band. Being the first band in a competition has it pros and cons; if you’re confident, you can set the bar for the rest of the bands… and that is just what Embers of Oblivion did.

The songs were recognizable, but never repetitive and loud as fuck! If this was going to be the quality of the evening, the jury was going to have a rough time deciding!

With this being a battle, not only about music, but about stage presence too, the audience is the big winner. This band (and most following bands) put quite some effort in entertaining the audience and connecting with them.

Ember of Oblivion struggled a bit with “The Dutch Gap” (the “appropriate” distance between the stage and the majority of the audience), but solved is nicely by focussing on the 2 or 3 diehards and a few photographers right in front of them, while convincing the rest to come closer.

The changeover is swift and exactly on time Temple Renegade starts their set.

Categorized as “Heavy Rock” this band is a little side step from the rest of the bands and that can be a strong point or not. Musically it is very interesting and fun to watch. Dual guitar tapping sounds awesome and the set has a great build up.

The love for music is audible and visible, but what bites them in the back is the virtually absence of a proper stage show. I guess it is part of the genre’s act, but the with hardly any interaction with the audience, the interest flows away. At times the chatter of people was audible over the sound of the band in the quieter parts and that is not a good sign. Not very polite of the audience of course, but the jury thought too that, that part could be improved.

When the curtain was raised (well, slided aside to be actually) for this band, there was a problem with the in ears of drummer Angelo. A mild panic arose but singer Bastiën Baron professionally distracted the people in front of him. Not all that hard, as he is a sight to see on the stage!

When the problem could not be solved quickly, Angelo, gave the sign to start anyway.
And boy they did…

I don’t know what exactly happened, but the venue was instantly boiling. The people came towards the stage and the complete band (yes, even the drummer) interacted with the crowd for an insane roller coaster ride.

The satanic-like character of Bastiën is impressive during his act. Painted with red marks on his head and arms he is ready to tear the venue apart. Towering over his disciples on the edge of the stage is where he loves to be and rolling his wide open eyes at them is received with great enthusiasm!

At one time I see Bastiën with some sort of cup in his hand and looking through my camera I can’t see what he does with it. When I look up, I get cursed, blessed, baptized or whatever too with greasy black stuff on my forehead! I had to wipe it away, because my camera slipped repeatedly of my head 😀 but I saw a few marks on foreheads later that evening.

Musically there are some glitches, but those are easily compensated by the given show!

Worth mentioning is, that singer Bastiën only sings clean. No grunts or growls, which makes it even more interesting. I can’t wait to check them out again! What a ride! What an energy!

The venue was pretty well filled, especially taking in account that it was the first hot day of the year, but when The Unslain was getting ready for their set, it looked like a bus of (mostly) girls was let in to the venue with crispy new The Unslain t-shirts. For one moment I thought I was at a Justin Bieber gig, judging by the squealing girls.

Musically The Unslain was OK. Pretty straight forward metal with a singer who doesn’t reach his full potential yet.

Their music is quite danceable, and the fans did just that! There is a lot of movement in the venue. The interaction with the crowd is decent, if you do not take in account the squealing girls when singer Jeroen moved a finger. A lot of heads were moving in tune with the catchy songs behind the dancing girls.

Last years winners competed again, but would only win the spot on Wacken as they did win already the rest of the prizes last year. Despicable Heroes plays hardcore and are living proof that winning The Metal Battle can really launch your band.

There is quite some wild movement in the venue now and I see an elderly lady having the time of her life on the edge of the pit!
When it is getting a bit wild in the pit, she is led away to the side by attentive people.

The set is slick and singer Koen tells extensively about their journey after winning The Metal Battle. It is a great promo for the organization, but maybe it is an idea to have an interview with the winner of last year to fill the time between the last band and the verdict of the jury.

All this talking takes up quite some time and at the end of the set, Koen repeatedly checks his watch and with 1 minute to go, they cheekily start their last song. The organization signals that it is over and the band professionally cut the song short. Everybody gets 30 minutes.

The venue is buzzing with energy from this great performance!

The last spot on the list is probably the best and TerraDown was the lucky one to get it. With the curtain out of the way, the band is doing their last checks and I have a change to check them out. Earik categorized this band as “Melodic Groove Death Metal” and when I look at them, this is not exactly what I expect of a death metal band. Short, neatly cut hair, regular slacks, Oxford shoes and no badge or shirt of metal bands…

The first two songs singer Nick has an occasional problem controlling his voice in some parts, but that goes by pretty soon, as is voice is getting warmer.

Nick stands tall and stoic at times which gives him a very confident appearance. He commands the band and he commands the audiece.

Musically it is nothing short of awesome! There is a lot going on, and the sound is rich and full. The stage show of TerraDown is pretty decent. It is not as flamboyant as Shuulak, but it is entertaining. The rest of the band is chipping in on the interaction, but never loosing their cool and focus.

During the set of TerraDown the riddle of the elderly lady is solved. It is the granny of singer Nick! With 81(!) years still metal as fuck!

The verdict of the jury…

When TerraDown is finished, the long wait for the jury and the counting of votes of the audience is there.

A wild cheer is going through the venue when there is movement on the stage. After the jury (Sander Jonker, Gerrit Mesker, Don van Andel, Jochen Lumeij, Erik Sprooten, Rick Bouman and Paul Scheers) is thanked for their infamous verdicts and Earik for softening the blow to the competitors, it is time for the business end of this evening.

Later I hear Nick of TerraDown say, that they worked hard on the points of criticism of the previous juries. This proves that listing to seasoned old hands, can take you far!

To me it is no surprise that the audience prize is going to The Unslain to them! Enjoy your gigs and coaching!

The jury prize is the “the big one”, so there is quite some anticipation and the explosive discharge is big when TerraDown is the called winner of this prize!

After celebrating the victory with friends and family, the band, including Nicks gran is up on the stage for a photo op and a talk with the jury. Congratulations from Pitkings and we will see eachother soon!

Sadly the gran of Nick bumped her toe and is bleeding so fist aid must be administered, but that doesn’t get her mood down. Sitting on stage with her foot in bandages, she talks to everybody, is getting on selfies and is very cheerful.

If there is one life lesson to be learned today:
Be like Nick’s gran!