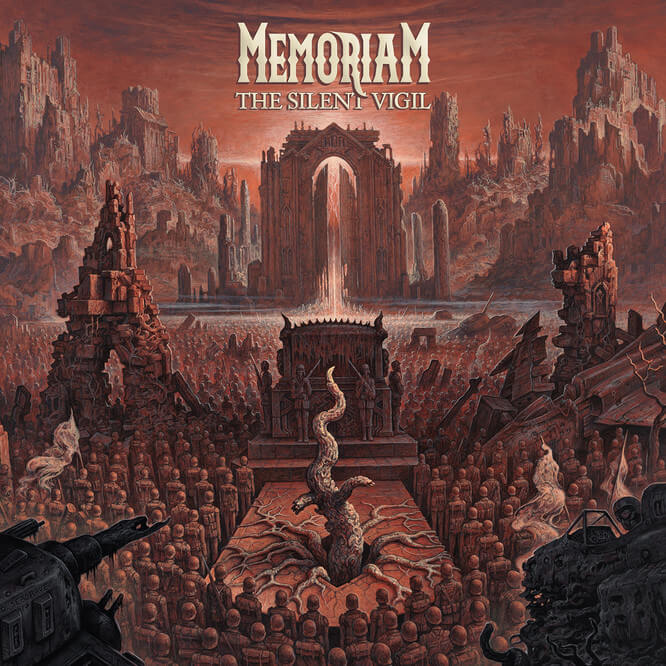 The old school death/grind metal band Memoriam from Birmingham are set to unleash their second album ‘The Silent Vigil’ on March 23rd, 2018 via Nuclear Blast. The band formed in 2016, but the members are around in the metal scene for decades and played in bands like Bolt Thrower, Benediction and Napalm Death.

The first time I heard of Memoriam was in 2016, when I listened to their first demo ‘The Hellfire Demo’s’. You could definitely hear the Bolt Thrower and Benediction influences in there. After that I was curious to hear their new album ‘For The Fallen’ (2017), which they produced as I expected and learned me in which direction they were going. And in my eyes they succeeded! It’s powerful, fast, dark and with songs like ‘Resistance’, ‘Surrounded by Death’ and ‘Reduced to Zero’, they had settled themselves as worthy successors for Bolt Thrower.

Now there is this new album ‘The Silent Vigil’. When I first heard it, I was very surprised. They’ve created a new sound, which was very different from their previous album. With especially more echo in the vocals, it was slightly strange to me and rather unpleasant to listen to. Of course I gave it a chance and I listened to the album several times. And I have to commit that I like the album more and more. The sound is quite dark and has more a feeling of doom. You can hear the dark and sinister sound they’ve created in songs like ‘No Know Grave’ and ‘From The Flames’. All in all Memoriam created a decent old school death metal album. I’m looking forward to see them live and to hear this new sound on stage.