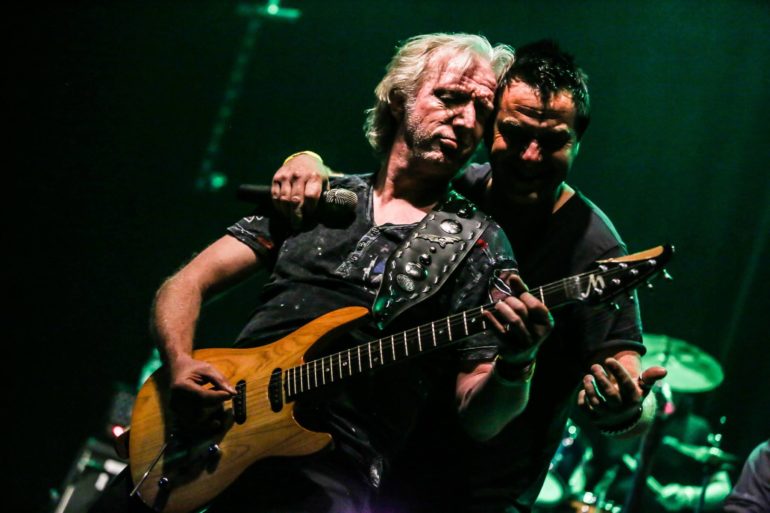 Martyr is a Dutch classic metal band and a delight for those who love strong melodies, speedy riffs and a high level of technicality. During the five years that Martyr was alive and kicking (1982‐1987), the band released two albums that are considered cult in the metal scene today. They are back since 2005 and I talked with Rick Bouwman (guitars) about their new album, the recording process, the history and future of the band and more.

Hey Rick. How are you doing?
Yeah, great. Busy, busy, busy. We just finished recording our new album and actually we just literally walked out of the studio. Especially the last few months we have been their with very high frequency. And besides that we also have played some shows in The Netherlands and some foreign countries. So I had enough to do and plenty to do.

For those who do not know Martyr, can you give a short introduction?
Martyr was originally a metal band from Utrecht that was founded back in the early 80’s. Our goals was to give a different sound to the Dutch metal and hardrock of that time. More speed, more technical riffs and its own identity. With two albums (‘For The Universe’ and ‘Darkness At Time’s Edge’), participation in Metal Massacre VI and many performances all over the world, the band was quite successfully till their break-up in 1987. In the zero’s, the band was frequently asked for reunion shows and the albums were again re-released several times. The train kept rolling and Martyr released 2 new albums called ‘Fear’ (2009, Rusty Cage Records) and ‘Circle Of 8’ (2011, Metal Blade Records). The style of Martyr has remained unchanged and we play everywhere on the European stages.

You have been around since 1982. Do you see a difference in the metal landscape then and now?
I think so. Nowadays metal falls apart into plenty categories, I would not even recognize them or know what they mean with it. Confusing. In addition, I think the entire digitization, which has brought many advantages, also brought a lot disadvantages. Back in the days it was really special and hard working to bring an album on the market and sell it. Nowadays, anyone can. Resulting in certainly a lot of good releases, but also a lot of shit. So nowadays it’s very difficult to be different and to profile yourself in this great amount of bands and albums. Respect for the great 80’s bands who are still filling the big stadiums!

In 1987 you decided to quit. Why?
That was particularly under pressure from a large record label, who wanted us to play more commercial music like Europe and Bon Jovi did. We we’re young rookies and naive, so we started to work on that, but we had a problem: we simply could not write songs on command. We still can’t. Our motto is always to love the songs, otherwise we are not satisfied. Is another also satisfied, than that’s a bonus. So we we’re not satisfied for 200% and at the moment the record company was looking for bands to sign a contract, they didn’t choose for Martyr. This was the beginning of the end.

Why did Martyr started again in 2005?
By popular demand actually, haha…! We already did a reunion show in 2001 for the Heavy Metal Maniacs fan club. And from Germany we we’re often pushed to re-release the albums again. That also happened. After that ‘Keep It True’ and ‘Headbangers Open Air’ asked us for a reunion show and after that it didn’t stop actually. Since then we have toured through Europe with bands like Lizzy Borden, Vicious Rumors, Flotsam & Jetsam and many more. All US legends from the same era as we started in the 80’s.

In early 2016 Martyr will release a new studio album. Can you give a short description of how the writing and recording process looked like?
It is actually a quite long and intensive process, but I will try to describe it in a few sentences. Rop (vocals) and I write the songs together. We do this at home for this record and we collect the ideas in Pro Tools. That gives us the opportunity, in terms of editing, to ‘play’ around with it. With the arrangements we go to the rehearsal room to discuss it with the band, but the ‘feel’ is already fixed. In other words, we can easily communicate to the band which atmosphere we want in the tracks. Rop has also his ideas of the vocals melody, lyrics come later.

I think this writing process have lasted more than a year. In early 2014, we had two pre-productions in the studio (Jack Nobles, our producer in Belgium) of four songs each time. That opened our eyes, because we knew we could do better. In September 2014 we took all the songs into the studio to record everything and a month ago we mixed the last songs. In the meantime, Jack Nobles made mixes based on our feedback, to get to the final product that we wanted. A hell of a job, but damn it’s been worth it.

We did the whole recording process in a traditional way. We recorded everything live and not triggered. And for this time we also worked with some amazing guest musicians including Gert Nijboer (Highway Chile), Nick Holleman (Vicious Rumors), Marloes (Izegrim), John Cuypers (Praying Mantis), Andreas Lipinski (Wolfen) and some others. They give some extra variety and dimension to the songs. Where does the inspiration of the songs come from?
Lyrically inspiration comes mostly from what we read or what we like in terms of movies and stuff. We don’t bring a message or something and don’t wear out any religion. We don’t want to change people, but also do not want that the lyrics are crap. The songs definitely have a subject and all the songs together create a kind of story. For the new album there are a few songs that are about the bad things in humans, but viewed from different angles.

And the inspiration of the music? Influenced by certain bands or genre? Or based on you previous songs and albums?
That inspiration is everywhere actually. Back in the days we we’re more influenced by Japanese metal and US metal than by the NWOBHM. But nowadays we also get ideas from bands like Lamb Of God. Look, in comparison to our first records, we learned a lot during the last 25 years. So we have become better musicians. Also the technology has changed and we listened to a lot of different music. So what we’re definitely trying to do and also succeed, is that we are trying to innovate ourselves, without losing who we are and our roots.

Are there some shows scheduled? And outside the Netherlands? Big tour? Support act?
We have already played a lot of gigs, even outside The Netherlands. And there are a lot of shows in the pipeline, especially in 2016 when the album is released. And again there’s also interest from abroad, so it’s all just like back in the days. Our aim is also to play at the bigger festivals, because there are already a couple scheduled. But we want more, so we are working together with our bookings management (Limelight / EAM) to add more. But first of all, there has to be a great release party in our own Utrecht of course!

What is your musical highlight so far in your career?
Which is yet to come. Because, really, this new record is simply the best we have made to date. I know every band says this about his latest product. So the day that this album will be released, will be the musical highlight for us. For me personally this was also happening with our first release ‘For The Universe’. But this new one is filled with so much energy, blood and sweat. We are really proud of this product!

What is your ambition for over 5 years? What will you have achieved?
About five years? Oops, thats very far ahead. First let’s make 2016 successful and hope that the fans like our new record as much as we do. Because like I said, we love this record and hopefully the rest of the world does also. And of course we hope to meet all the fans at the live shows, or wherever, and hear what they think of the new album.

Thanks for the interview Rick!
Cheers!