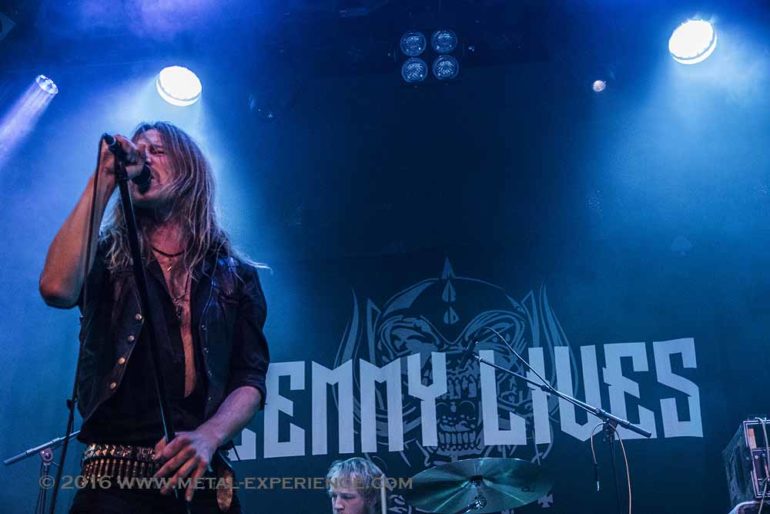 December 29, 2016 | Patronaat, Haarlem – On December 28th it was one year ago that the one and only Lemmy Kilmister pasted away. A great lost for the world of rock, metal and other kinds of rock ‘n roll. For the Dutch band Death Alley reason enough to pay a tribute to their lost hero. During eight shows across The Netherlands they play the best Motörhead songs with a nice selection of guest musicians. At Patronaat Death Alley had company from Peter van Elderen (Peter Pan Speedrock), Bob Hogenelst (Birth of Joy), Charlotte Wessels (Delain), Janneke Nijhuijs (The Deaf), Elle Bandita (DOOL), Marco Roelofs (Heideroosjes / STAVAST) and Dave Vermeulen (Voltage).

Snake Bite Love
Because the show was sold out, Patronaat made the choice to replace the gig from the small hall to the large hall. A good choice, because more people had the chance to join this ‘party’ to celebrate the life of Lemmy. Before Death Alley & Co are hitting the stage, support act Snake Bite Love is warming up the audience. The students of the Metal Factory bring up a kind of traditional acoustic show with Motörhead songs and some songs Lemmy was involved in outside Motörhead. A nice start of the evening while drinking some beers. Death Alley & Co
Around 9 PM the curtains open and… nothing happens. But then, after a few minutes the host of the evening Dikke Dennis shows up and welcomes us and the band on stage. From the start one things is for sure. We are with one big family and every person in this venue is here for just one reason: celebrate the life of Lemmy and Motörhead. Tonight the drummer of Death Alley Ming Boyer is replaced by Bob Hogenelst, the drummer of Birth of Joy and they start of with the two songs Motörhead and Shine. Like I said, the musical foundation is powered by Death Alley, the details are filled in by all the great guest musicians. The first one the band welcomes is Marco Roelofs and he brings us the two classics Iron Fist and R.A.M.O.N.E.S., which are performed very tight by the band and Marco. Some other highlights that follow are Bomber with Elle Bandita, an acoustic version of Ain’t No Nice Guy with Dave Vermeulen/Charlotte Wessels, (We Are) The Roadcrew with Peter van Elderen and Overkill with Marco. Especially Peter and Marco add this aggresive touch to the songs, which I missed a little bit in other performances. Then I realize how rock ‘n roll, loud and dirty Motörhead actually sounded live, because this sounds just a bit more cleaner and friendlier. Not a big deal, because you can’t beat Lemmy and it’s just nice to see that this evening is not a cover competition, but an evening on which the artists can honor their idol in their own way. Last but not least Dikke Dennis pulls off his shirt and sings the last song Schoppenaas (Ace Of Spades) with the band. He truly gives me the feeling that Lemmy is still alive! Conclusion
Dead or alive, it’s for sure that Lemmy is still the most populair rock ‘n roll hero on this planet. He makes people and music come together and let people live their lives like they want to. This was a nice way to remember Lemmy musically, but I missed some stories about him and a video screen with footage of Lemmy. It just would have made it complete. You missed it and wanna go? There are four shows left: On January 6th at Metropool (Hengelo), on January 7th at Volt (Sittard), on January 20th at Fluor (Amsersfoort) and on January 21st at Victorie (Alkmaar). Lemmy lives!