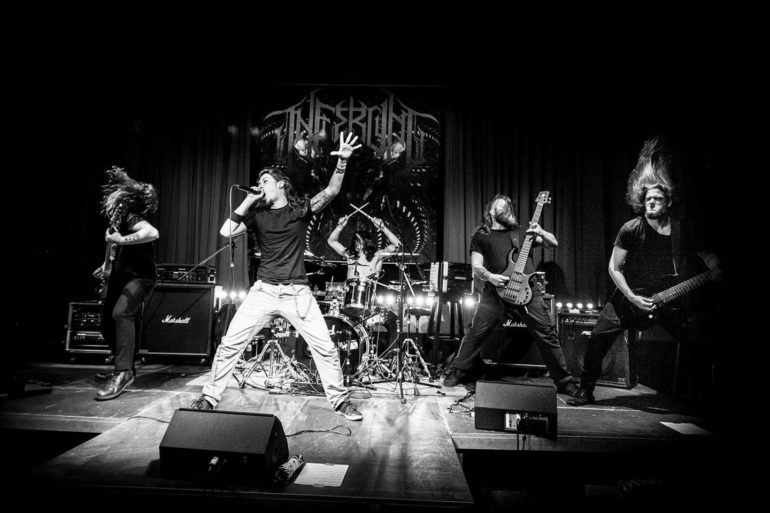 Please welcome Inferum! This Dutch mechanical death metal band was formed in 2015 and already won the MetalBattle 2017! A great achievement when you realize that the band members have an average age of only 19. I talked with lead guitarist Lars Deelman about the band, their upcoming record and of course the (near) future.

Can you describe your band in short to people who are not familiar with Inferum?
Inferum is a mechanical 5-piece death metal band from Eindhoven. We combine heavy, progressive groove riffs with brute vocals that sound almost mechanically. The current line-up only exists for only six months, but we already have the title “winner of both MetalBattle prizes”!

And how do you describe your musical style?
Our music style can be described as “mechanical”, because of a few things. The guitars and bass guitar are often synchronized with the bass drum, so it creates a tight, heavy sound. We combine with a lot of groovy prog riffs, weird high pitch guitar sounds and really low grunts and gutturals. The performance is also part of this “mechanical” style, due to the synchronized headbanging and stroboscopes, that follow the bass drum.

You won this years edition of metal battle. What was the main reason according to the jury?
The main reason was that they were blown away by the fact that we are no older than 19 years and play together for half a year, but played an extremely tight set, with a synchronized performance. Even followed by our drummer Wouter, that could keep the audience excited till the end! They also really liked our vocalist Morrison, not only because of his grunting ability, but because he really had the crowd within his hands and showed true frontmanship as well.

And did you agree with that? 😉
It was our goal, so we’re all really glad that they could see our hard work pays off. Altogether we are extremely proud of what we did and incredibly thankful for the amazing audience and jury for picking us as winner. We didn’t expect to win at all, because of the tough competition. But we are very joyful that we did!

In June you will release your first EP called ‘Modern Massacre’. What can we expect?
Modern Massacre is an EP that shows off our newest work, which is the beginning of our new genre “mechanical death metal”. It is filled with heavy riffs, weird guitar noises, low grunts and overall just rhythmic patterns to bang your head to. Lyrically it is mostly about the political/social situation the world is in right now and how we believe it is affecting our behavior in a negative way. The main goal with this EP is to express our anger towards this behavior, in musical and lyrical approach.

Is it a bunch of songs you collected through the years or did you pick a date and wrote songs together?
We all sat down and decided we really wanted to find our unique selling point, so we started writing music together. At first it was written by me and edited along the way. But now we wanted to use all of the different influences that we have as individual musicians, ranging from fusion to brutal death. We combined those elements to form a new sound which could not be placed in the genres that we knew. So long story short: we decided to write together for the first time and the EP ‘Modern Massacre’ is the result of all our influences combined into one.

And how was the rest of the writing process going?
It was quite easy to be honest. We wrote 1 song every 2 weeks and tightened our performance in the week following the writing process. So basically we wrote our complete EP in about 7 weeks. We expected it would go wrong sometimes, mainly because we have such divergent musical tastes. But we all valued the input of each other, which made it easy for us to discus our ideas and work on it together. We all had a say in the writing process and we pushed each other to our fullest.

What about touring in 2017 and 2018? Big plans?
By winning the MetalBattle 2017, we also won a lot of opportunities to play at festivals in the Netherlands, like Stonehenge, Baroeg Open Air and Tattoofest. Besides that we already had a few shows scheduled. In total we have 16 shows coming up and we hope there will be more coming, so we decided to call it our ‘EP release tour’. After that we immediately start writing on the full length album, so hopefully we can continue in 2018 for an album-release tour. We also want to perform in foreign countries, because our main goal is to go abroad Europe and eventually other continents. Maybe the ‘Wacken Open Air-finals’ will be our first show in another country, but we’ll have to wait for that opportunity, which we definitely will be trying to win.

There are a lot of metal bands nowadays. What are you doing to be different and original?
Every one of us (except for the vocalist) did not originate from the death metal genre. Most influences came from progmetal, symphonic metal and even fusion. So we try to incorporate all of our influences into death metal and try to create a new sound that way. We want to take a look at riffs differently and create an interesting death metal sound which grooves a lot because of the halftime beat and sometimes even with polyrhythmic sessions. We also try to avoid tempo-changes, only if it serves the riff/song in the right way. We try to write different drumbeats on the same riff, so it can change from a 16th note riff to a triplet riff. In that case we completely change the feel to keep it fresh, but still have that smooth transition to it. And of course we want to blow everyone away during our live shows! It has to be an experience no one in the audience will ever forget. We give all we have on stage because we want the audience to experience the same thing that we do when we listening to our music: pure fucking Armageddon!

And what about 5 years? Do you have sky high ambitions?
We do have sky high ambitions and are willing to do everything we can to achieve those. But on the other hand, we have to be realistic about that. There are a lot of amazing bands with a lot of potential, so we have to work really hard to stick out between those bands. We hope to play a lot of shows all over Europe and eventually abroad Europe. But most of all, we would love to have a lot of loyal fans who will support us and just enjoy our music. We hope that our music will reach as many people as possible, that can identify themselves with what we are trying to achieve as a band.

My last regular question as usual: what’s your advice to young starting heavy bands as you are one yourself?
Try to be unique and don’t be afraid to listen to other genres to influence you as a musician. There is so much music besides metal to expand your skills and in what you can achieve as a band regarding to song writing. Besides that, having fun is the most important thing. If you are able to perform at a professional level and still can enjoy what you are doing, you can reach the top. Also your performance is very important! There’s a big difference between a local band that plays good music, but just can’t get the audience to move and a young band that can make the crowd do whatever the hell you want. Mosh-pit, wall of death, everything is determined by the combination of performance and good music. Having fun is also a big part here. If the audience is seeing that you and your band are having fun on stage, they will pick up on this. So even as a beginning band, do not be afraid to show your balls on stage!