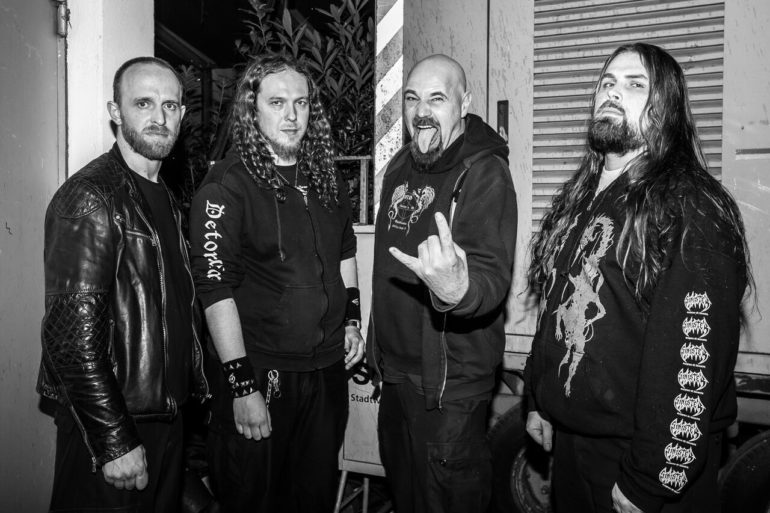 One of the most succesfull death metal bands from The Netherlands is for sure God Dethroned. Founded by vocalist/guitarist Henri Sattler in 1991, the band released 9 albums and played all over the world. They quit in 2012, but after playing a reunion show at the floating festival ‘70.000 Tons Of Metal’, they decided to go on with two new members. Now in 2016 they are back on track with a lot of shows, including a show at Graspop 2016. I talked with founder/guitar player and vocalist Henri and drummer Michiel van der Plicht about the past, the future and of course a new album.

First of all congratulations. It’s about 25 years ago you started with God Dethroned. Are you playing the shows nowadays with the same energy and enthusiasm as 25 years ago?
Henri: Yes, I’m sure I play with the same enthusiasm! You saw the concert here at Graspop right? I think I had some fun on stage, at least I wasn’t grumpy! Haha… No, serious. We had a hiatus for three years because I needed to recharge my battery and find some new energy. So in 2015 Michiel and I decided to go on with a first reunion show and we don’t regret it at all. It’s going fabulous and we play a lot of shows and get a lot of positive reactions.

How were those three years?
In the three years we quit we received a lot of appreciation from people who didn’t pay attention to us in the years before. “Shit man, why did you quit. Why don’t you start again.” So now we are back and we get reactions from those same people, that they are glad we we are back. That’s nice to hear!

A lot happened through the years. Some line-up changes and some short and long breaks. Is that the reason that you and Michiel don’t work with permanent band members anymore?
Yes. When you make plans for a big tour and you need a new guitar player, then you pick one who is available and that person is going on tour with us. At that moment you are close to each other and that’s not always a positive thing unfortunately. Haha… So after a few years it doesn’t work anymore and you have to ask that person to leave.

Touring is an intense and chummy thing to do and not everyone is good at it. It’s hard to keep everybody in the band satisfied and happy when you perform under high pressure in front of large crowds. Not your full time job is important at that moment, but the band is the major priority. So it’s hard and difficult to find a good team and keep it together. So we decided that the two of us are God Dethroned and that the other members have to prove themselves before they become a real member of the band. We trust each other, we understand each other and we always agree in most things. A democratic band is not bringing you any further. But about Mike and Jeroen, they are doing a very good job and of course they will become permanent members of God Dethroned soon.

God Dethroned is since the 90s a big name in the death metal world. Do you feel that you’re just as popular before you break in 2012 or do you have the feeling that that you have to start again?
We are more popular now than we were before. We see it in the request for shows, in the amounts of money, the large crowds and the selling of merchandise. All positive things!

Does the comeback also has a commercial function? For example, for the promotion of your own guitar brand SKG (Serpent King Guitars)? It’s working and it’s nice, but that’s absolutely not the reason to play with God Dethroned again. Of course I play on my own guitars, it would be strange if I weren’t, but also a lot of other artists are the ambassadors of SKG. And they are on the website of SKG, I’m not! Haha… So God Dethroned must be seen separated from my guitar brand. I play in God Dethroned for the music and not to sell guitars.

Your latest album ‘Under the Sign of the Iron Cross’ was released back in 2010. When can we expect something new?
We are busy with it. We already wrote some new songs and we are very satisfied about it. But it will take some time, because we think quality is more important than quantity. We set the bar very high! The fans, the record label and ourselves are expecting some serious music after all those years of silence. We only wanna write and record songs that are typical God Dethroned and typical old school death metal, but also very strong and with some new elements in it. We throw all the other crap into the thrash bin and focus on the best songs for this 10th album!

The Netherlands is packed with high quality death metal bands. What are you doing with God Dethroned to be unique?
We are not busy with being better or more unique than other bands. We just write good song and we try to bring good performances. There are many bands that give everything and go sky high and after a few years they are on there way back. We try to be constantly good and people appreciate that. For example: 70.000 Tons Of Metal asked us to play over there and they payed us very well for it!

In my closet I found a T-shirt of the ‘Toxic Touch Tour 2006’. I bought it during your show at Vera, Groningen and it’s packed with tour dates! Is that also something that proves your success?
Of course. But then you have to take a look at the 2009 tour shirt. Haha… For every leg of the tour we printed a new shirt including all the previous tour dates. So in the end of the tour we had many, many tour dates on the back of the shirt. Tiny letters! People started asking us if we ever were at home. Haha…

Are you still reaping the benefits of your success in the past?
It’s an interaction between the past and now. During live shows we try to play one or two songs of every album. Not only new stuff or only old stuff, but just both of it and everything in between. Why do you think people are still coming to our shows? Because we do something that make people happy and that motivates people to go and see us. Also younger kids are curious to see us, because they never seen us before but heard of us. I see people in front of me who weren’t even born when I started the band. Haha…

You already played all over the world and did awesome things with God Dethroned. Is there something you would like to achieve?
Yes. We would like to make an album that’s mind blowing and big news in the metal world. The black metal band ‘Emperor’ made this album ‘Anthems to the Welkin at Dusk’ and with this album they had their worldwide break through. All the albums before and after didn’t reach that level. There are more band that made an album that shocked the world and made people say “Wow!”. And that’s something we would like to achieve. It can be a mix of killer guitar riffs and enthusiasm that can make it possible. But again, it takes a lot of time to achieve it.

What are your plans for the next two years?
We focus on the festivals and the gigs in the weekend. Those are the moments people go out the see us and we can deliver the best shows. And of course we will released are new album in 2017 or 2018!

My last question as usual: what’s your advice to young starting heavy bands?
Be yourself, do the things that feel good to yourself and only go for the best. Otherwise it won’t work. Be enthusiastic and support yourself in what you are doing. Just take a look at Within Temptation. They released only a few albums, but they only released the albums which they supported. Till there third album they called the band a ‘hobby-project’ and look where they are now. Amazing. So, just do what you think is the best and only go for the best.