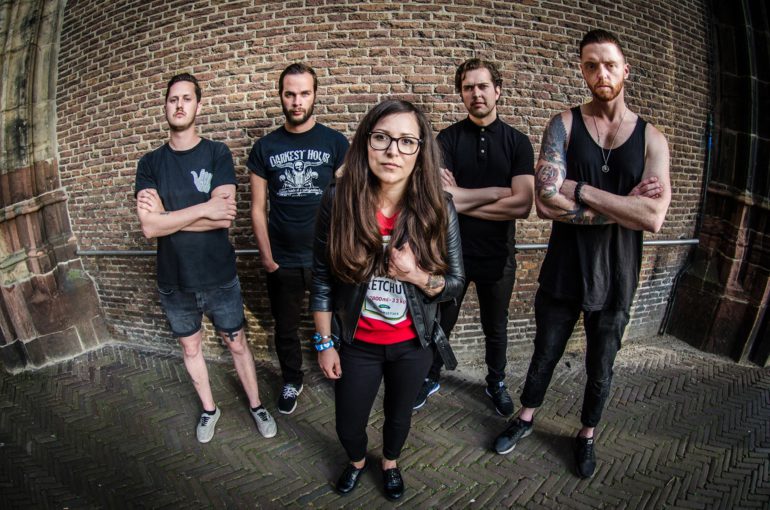 The Amsterdam based band For I Am King combines furious metal riffs with distinctive melodies, pounding drums and female vocals. Since forming in September 2013 they released their debut single ‘The Beast Within’ in October 2013 and their debut EP ‘Revengeance’ in May 2014. They already played a lot of very nice gigs like ‘Jera on Air’, a short tour across the UK in 2015 and they played at the ‘Headbangers Stage’ of the almighty ‘Wacken Open Air’ in Germany. Now ‘For I Am King’ recently released the singles ‘This is a Warning’ and ‘We All Have Demons’ to the world and just finished the recordings of their debut album. Anton talked at Patronaat, Haarlem – where they played as support act of ‘The Haunted’ – with Wouter (guitar), Jasper (bass) and Alma (vocals) about their upcoming album, touring and the future.

You just played as support act of the mighty ‘The Haunted’. How did it go?
First of all it was a great honor to play as support act for The Haunted. They are our metal heroes from when we were kids! The show went very well and we also played two ‘new’ song from our upcoming album. During the years we discovered that we play more tighter and sound more like a so called ‘oiled machine’. That’s what helps us to focus more on the entertainment part of the show, because the musical part is like an automatic pilot. Also Wouters mom was here tonight and she said Alma her voice sounded good and very ‘powerful’. Haha…

The last year For I Am King is touring a lot through The Netherlands and also in other countries. Where is the success mainly coming from?
Well, not that much you say. Haha… But yes, we did play some nice shows the last period. Besides our gigs here in The Netherlands we also did a two runs of concerts in the UK. Our guitar player Jürgen has direct contact with our booker, Alex from Doomstar Booking, and together they plan the shows. If you keep investing and asking, once in a while it pays you back.

You just finished the recordings of your upcoming debut album. What can you tell us about it?
Expect just pure modern metal. With Alma sounding heavier then before and with a more powerfull voice then our previous releases. We approached the guitars a little bit different then before. More effective layering, catchy chorus leads and more balanced solo’s. You can also expect a lot of pounding drums including brutal double bass parts. So, it’s a real metal album which contains some stuff you didn’t hear from us before.

And when will the album be released?
Well, unfortunately we can’t tell you all the details about the new album, yet ;). But the new album will be released within 6 months and we think the sun will shine, so maybe you know a little bit more now? Haha…

How long did the song writing and recording process of this new album take?
Well, the writing of the songs took us about 6 months and after that the recording of everything took about 3 months. So we hit the studio with complete songs. Jasper has his own studio and he produced, recorded and edited everything. A nice thing to know is that all the instruments were recorded separated from each other. The drums for example was recorded in a chalet we rented somewhere in the middle of nowhere. We used some curtains to optimize the recording sound. So we did very cool things in our whole recording process.

You shot a very nice video for the single ‘We All Have Demons’. What is the song about?
It’s about the fact that all the people have an evil, bad and dark side in their soul. We sometimes all do things we shouldn’t do and think about things we shouldn’t think about. So, people can look pretty and nice at the outside, they also have an evil side. In the video we tried to catch this.

Where is the inspiration for the lyrics coming from?
The lyrics are all written by Jasper and are mostly about myths and legends. So, not the daily stuff we have to deal with, but ancient stories from books I read and movies I watch.

Your Facebook page is saying “It’s simple… just metal!”. Does that cover the sound of For I Am King? Or are there certain influences that dominate?
Haha… That’s a nice one! This is more like an inside joke thing how we came up with slogan haha. We stole the slogan from an certain website and changed it a little to fit our needs and desire 😉 This one is for the more observent whatcher. The one that guesses it right recieves a free t-shirt! (we exclude direct and personal friends since they know the answer way to well ;-))
On a more serious note, this album is a true metal album with all the ingredients like heavy vocals, guitar parts and double bass drums so we changed the slogan to ‘it’s simple just metal’. People mostly think we are a metalcore band, because of our looks. We don’t have long hair, wear blouses and don’t eat beef the whole day. So, we are not the stereotype metalheads. Of course there are some influences from different metal types in our new album, but nothing that dominates, because we created our own sound. Maybe if you listen very close, the influence of ‘Gothenburg’ melodic death metal is a little more present then other influences. But just a little bit more. So it’s simple, just metal! Haha…

Today you played with The Haunted. What are the plans for 2016?
We are planning a club-tour across The Netherlands and Belgium after the summer and we are playing at Jera On Air and Tattoo festival. We are in the progress in booking some more show, so we have some very nice things comping up. But the most time we would like to use to promote our new album by doing interviews and stuff like that..

I saw that you are sponsored by Monster Energy. How did that happen?
We are very happy to be sponsored by monster energy, we all drink a lot of it, especially our bassplayer Jasper, he drinks it every day and night haha. Their slogan is Unleash The Beast! (Within) 😉 that’s what happens with Alma on stage!

And what about Heinz tomato ketchup?
Alma: Haha… Well, I like ketchup and I like the shirt which I wear a lot on stage. So it became a kind of gimmick and people recognized me and the band because of it. So, that’s it basically. No secret message behind this shirt unfortunately.

It’s going very well with For I Am King. What about 5 years? Do you have some plans or dreams?
Difficult too say, because it’s a long time ahead. What we would like to achieve is to build up a name in the European metal scene. That people know who ‘For I Am King’ is and that we play bigger shows and venues across Europe as support act or as headliner. We also would like to release another two albums in the next 5 years.

My last question as usual: what’s your advice to young starting heavy bands?
Don’t just focus only on your music, but also try to see your band and music as a product. You have to sell it, promote it and work hard for it. Just take the time for that part, because playing gigs is important, but in the beginning promotion is more important. Marketing is key!

Are there other things you would like to say?
Just check our website and socialmedia for all the news and stuff, because there’s happing a lot the upcoming period!