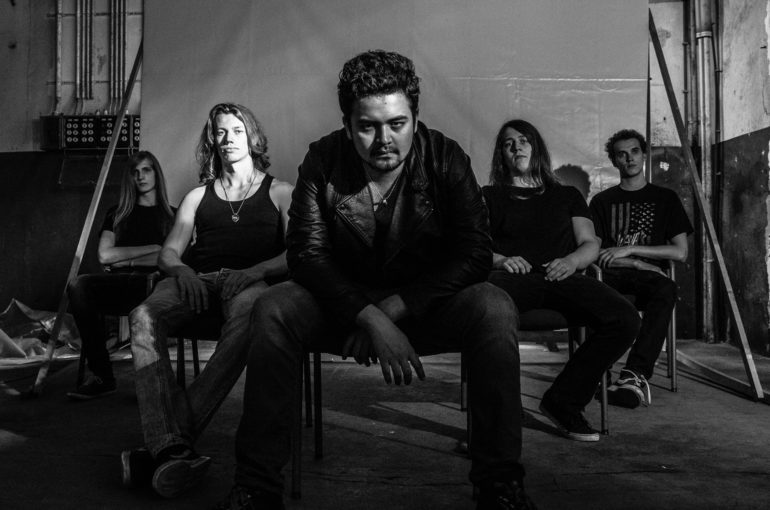 Extremities is a relatively new progressive/groove metal band from Eindhoven. Founded in 2015, their music takes influence from bands such as Textures, Gojira and Monuments. In the short period they are around, they won the Metal Battle 2016, the Dynamo Metal Fest contest and on July 16, 2016 they released their first EP called “Rakshasa”. So, time to catch up with Thimo Franssen (vocals) to talk about their success, EP and future.

Your around since 2015 and already quite succesfull. What’s your secret?
To us the “secret” to our success is pretty much the same thing that gets you success anywhere else – we work hard each and every day. We all have a clear goal in our mind and we fight to reach that goal! Everyone in the band is very dedicated and has his own role to play, creating what essentially is a well oiled machine. This, in addition to the amount of practise we put in, got us where we are right now.

On July 16th you released your first EP “Rakshasa”. Can you tell us a bit more about it?
Rakshasa is the first real thing (next to our single “The Human Conundrum” of course) that the world will hear from us, so we put in a lot of time and energy to create what we think is an EP that captures our essence as musicians. The EP will consist of 4 full songs and an intro/outro, so that makes 6 songs in total. The drums have been recorded at Split Second Sound in Amsterdam, the rest of the instruments have been recorded at the home studio of our guitar player David. Mixing is done by David and the master is done by Jochem Jacobs. The EP will also include an intro made by our dear friend and colleague Zino van Leerdam, who did an awesome job setting the mood for the rest of the songs.

How long took the whole writing and recording process of “Rakshasa”?
We’ve been working on this CD for 6 to 8 months now, give or take a few weeks. It’s been an intensive writing process, especially with all the details we wanted to add. After that the whole recording/mixing/mastering process has taken a bit over two months.

Who is mainly writing the songs and what are the songs about?
Most of the music is written by David, while the lyrics and melodies are written by me (Thimo). The lyrics and music of this EP center around the story of someone who is plagued by the darkness of mankind and the darkness in himself, and who ultimately loses himself completely. We want to take the listener along on a journey through a mind that is slowly going insane, and create a world that everyone can lose themselves in. The EP is also influenced by the Hindu culture, with ‘Bhor’ and ‘Saanjh (Dawn/Dusk)’ and the title track ‘Rakshasa’, which refers to the mythological Hindi monster. The music becomes more aggressive as the EP progresses, as we wanted to capture the descent into madness that our main character is experiencing.

Do you have any idea when to release a full lenght album? Or are you waiting for a record deal first?
Right as of now there are no substantial plans for a full length yet as we are still fully concentrated on the EP, the festivals we’re playing this summer, and everything around it. We want to make ourselves known in the metal scene, and after that we’ll think about making a full length album. We’ll have to wait and see if this album will be backed by a record label or if we decide to go indie and start a crowdfunding campaign. It depends on where we stand when we’re ready to release a full-length.

Some bands claim that marketing is just as important for a band as the music itself. How do you think about that?
In today’s day and age marketing is one of the most powerful skills a musician has to master. There are a lot of very good bands out there and you need to somehow stand out. So a promotional plan and a lot of marketing is definitely necessary. Since 4 out of 5 members are Metal Factory students we get some advice and sometimes some help from teachers about marketing and promo, but at the end of the ride we’ll have to do it ourselves.

So most of you are Metal Factory students. How much advantages does it give to you comparing to other starting bands?
Metal Factory is a wonderful place to develop your band. You get to meet your band members every day, so communication becomes a lot easier. The teachers are of course very experienced and willing to help out and give advice, so I think in this respect MF gives us a few advantages over other bands. Here too though, at the end of the day it depends on how much we are willing to work and how much we’re willing to give to reach our goals. There’s no one holding your hand, there’s no one that can tell you exactly what to do. Teachers can only help out so much so you try, you fall, you stand up and you continue until you reach whatever you set out to reach.

Last question. What’s the bands ambition and goals in about 5 years?
5 years from now we want to be spreading our music throughout the world, sharing stages with all kinds of awesome bands and musicians and seeing every country! That’s the dream anyway, we’re working very hard to get to that point! Right now we’re going strong with a lot of awesome festivals we’re playing and a lot of experience we’re gaining. We’ll have to keep that momentum going and with a bit of luck and a lot of hard work we’ll get there eventually!