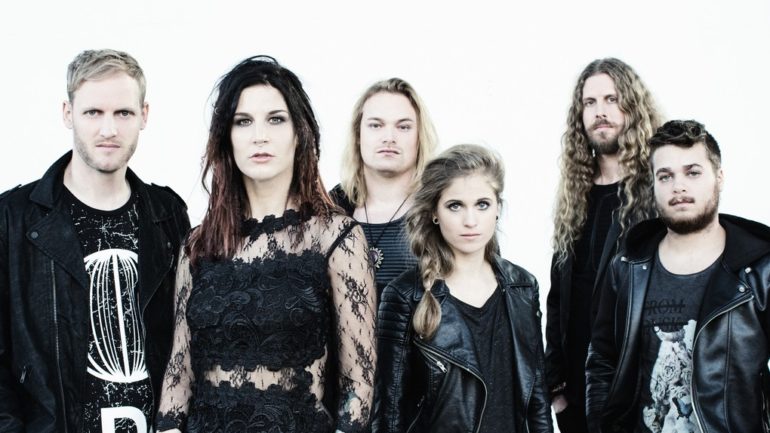 Hello Martijn. Delain is going fast! What’s your highlight with Delain so far?
That’s a question I get more often. To be honest I can’t name one highlight because there are so much. Hearing the first mix of our new album is a highlight, when our first record is reaching gold status in The Netherlands will become a highlight, our show at Patronaat was a highlight, our USA tour was a highlight. So, there’s not one particular thing which I can call the number one highlight. I’m very honored that I can do this job. It’s a full time job and the fans are my boss.

Earlier this year you played at 70.000 Tons Of Metal. What about that?
That was also a highlight! Haha… It was really awesome. A funny thing is that the organizer of 70.000 Of Metal ‘Skipper’ was our tour manager during my very first tour when I was 17 and played with Within Temptation. Very cool to see him, and lots of other familiar people, again after many years. A awesome combination of great food, no smelling Dixies, good weather and a proper room with nice beds instead of a small tent. Haha… And for us as a Dutch band it’s also great, because we can escape from the winter and move to the sun. Just perfect.

In March you did a tour through the USA. How are the comments and reactions of the American people at your music?
The Americans are very open, extrovert and honest. They really give us the opportunity to play there and to make us feel at home. We played there with Nightwish and every show we played in front of 2500-5000 people. So, really serious venues. And I have some news for you, because in 2017 we are doing a headline tour in the USA. Very excited about that! We are now working on the dates, but we can’t wait to go back to see all the fans again.

Is it frustrating you that metal doesn’t get that much attention in the media?
Yeah, for sure. Especial when you realize that Dutch metal bands, together with the Dutch DJ’s, are the most successful artists in the USA nowadays. When I look for example to the Dutch talk show DWDD and a pop band is telling that they are gonna do a tour in America, than I think, we already did four tours over there. In that particular way I think Dutch people are a little bit narrow-minded. People should look further than the regular and mainstream stuff. That’s just annoying and frustrating.

In 2015 guitar player Merel Bechtold joined Delain. What was the main reason she joined the band?
Merel replaced our guitar player Timo for a few shows in 2014 because he was not able to play. We know Merel for quit a long time, but from that moment on things just fell in place. We knew she would fit in the band and take the band to a next level. Besides that, I really like her attitude and fans are very enthusiastic about her. So we just wanted her to join the band to give the band more body and of course a richer sound.

Can you tell us a little bit more about your upcoming album ‘Moonbathers’?
The sound and recording of the album is in line with our previous album ‘The Human Contradiction’. This new album ‘Moonbathers’ is just a little bit more heavier and includes more orchestral parts. We also optimized and improved some parts on this new album which we were not really satisfied with on ‘The Human Contradiction’. And of course an artist will never say that his previous album was better than their latest album. Haha…

When are you satisfied with a new album? When is it ready to release?
Well, actually never. Haha… But that’s also the pitfall for a lot of artists. They like to tweak and tune constantly and are never satisfied. There comes a time you have to say “and know it’s finished”. I’m a perfectionist, but you have to know when it’s enough. Otherwise you are constantly busy with small details, which only will be heard by maybe 1 out of 1000 persons.

How is the writing process going? Who is doing what?
Charlotte is basically responsible for the lyrics, I’m busy with the musical pars and we have the help of Guus Eikens, who’s not in the band, but helps us with the song writing. So we are basically the core writers, but also Timo is becoming more important in the whole writing process.

So the three of you are sitting down together and are ready to write a song?
Yes, basically we are and we always succeed to write some cool stuff. So, I’m very glad with this team and how we work together. Besides that I think Timo is getting more involved in the song writing, but also Merel can become important for us. She always wrote the songs in her previous band ‘Purest Of Pain’, so I think she will do more song writing for Delain in the future.

Question from Erna (Facebook): Are there plans to record and release a live DVD?
Yes! This year we celebrates our 10th anniversary. We arranged a crowd funding campaign (PledgeMusic) to get our fans involved in this whole celebration. In two weeks we reached our goal and on December 10th, 2016 we will play at Paradiso Amsterdam to record our first live DVD. We play a massive show with guest musicians, special effects and lots of other surprises. We try to let people play who played with us on one of the albums. Some of them already agreed, others have to check if it fits into their schedule.

Something else. There are a lot of symphonic metal bands nowadays. What are you doing to be different and original.
We don’t look to other bands and we do what we wanna do and what we like. Creativity is very important in this and we just wanna be ourselves and be genuine. We just do what we want and what feels good.

Where do you think your popularity is coming from?
That’s hard to say. If you have the answer to this question, you are a billionaire. Haha… There are a few reasons for our success I think. First of all we have a very loyal fan base around the world. “Don’t mess with our fans!”. Haha… Secondly we keep our both feet on the ground and we never act bigger than we are. Just act normal, but on the other hand, we dare to say that what we do is good.

And what about 5 years? Do you have some plans and ambitions?
Well it sounds a little bit boring, but we wanna keep doing what we are doing. We also wanna become stronger as a band and involve every member for 100% per cent in everything, because no one is replaceable and we are gonna do this as a team. So our ambition is to consolidate as a band and evolute in our music. Do new things, but stay Delain!

My last question as usual: what’s your advice to young starting heavy bands?
Ambition and perfection are good and dare to make important choices in name of the band. Another thing is to have fun in what you are doing. If the fun is gone, I quit with the band.

Haha… I hope you won’t! Thanks for your time Martijn and good luck!