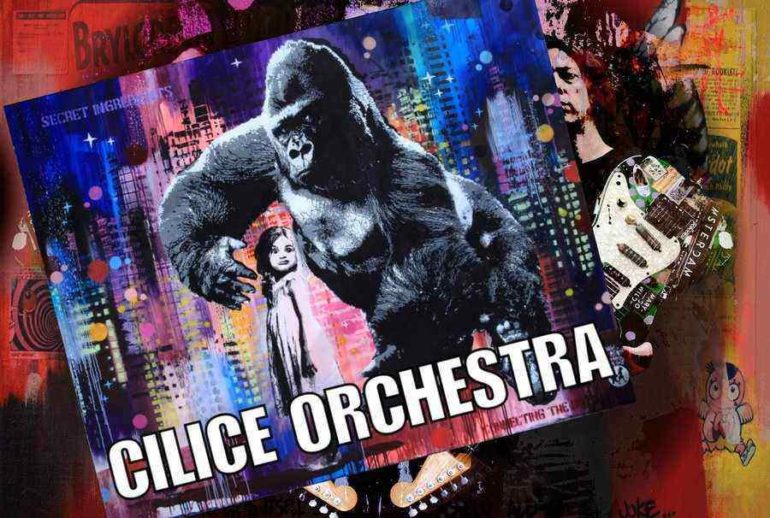 On the 28th of November, the Dutch composer and guitarist Theo Holsheimer (Cilice) will release a new album of his unique, orchestral project Cilice Orchestra. He worked together with many guest musicians to come up with a musical journey where djent metal meets jazz, contemporary classical and soundscapes. I talked with Theo about this complex project, touring and the future.

Hey Theo. How are you doing?
I’m doing fine, especially with this new album ‘Cilice Orchestra’ in the pocket!

“A new unique instrumental orchestral project. Where djent metal meets jazz, contemporary classical, soundscapes.” Sounds interesting. Where came the idea from to start this project?
‘Nieuw en Meer’, an artist community situated on the outskirts of Amsterdam, has been the host of numerous musical performances, ranging in styles, over the past decades. As the community prepared for it’s 25th anniversary, the idea occurred to combine the forces behind many of these performances. So they create the concept of ‘Meertonen’, an event merging various styles – rock, math metal, klezmer and jazz – live on stage.

I was thrilled when ‘Meertonen’ asked me to write music for this special event and perform with my band Cilice in a collaboration with jazz musicians. It’s hard to describe the music, so I came up with ‘Where djent metal meets jazz, contemporary classical, soundscapes’. All ingrediënt are there. I’m curious what the average listener would call this music.

Where did you get the inspiration (music and lyrics) from?
I knew I will write anything that comes to mind, no compromises. I wanted to compose some intense instrumental freaky madness. Of course I have my musical influences like Meshuggah, Fredrik Thorendal Special Defects, Nine Inch Nails, Devin Townsend, Weather Report and so on. They are just awesome and I love their music. The djent polyrhytmic guitar riffs, what Cilice is known for, are still there, but when I’m working on my own music I try to listen to my inner voice as much as possible. Following my instinct and trust my own musical voice. I rearranged some unreleased Cilice tracks I already wrote and added new flavors to the mix like horns, strings, according some soundscapes.

When I listen back to the Cilice Orchestra tracks, it makes me realize I use a lot of composition tools like classical composers do. The way they use themes, counterpoint layers, dynamics, thinking in terms of tension and release.

Where did you get all the guest musicians from?
Besides working with my band Cilice, it was pretty easy for me to find all the other musicians. Because of my musical background in different musical genres, I know a lot of amazing talented musicians. I invited some great open minded musicians I know, active in jazz, world and klezmer music, for some additional recording. It was a blast to see how everything came together so well. Everybody puts a lot of effort, hard work, patience and dedication into the project. When did actually start with the project and how long did you work on it (from writing lyrics/music to recording and finishing the album)?
We started recording mid 2014. The recordings took place at several locations. Philipp Moser tracked down his drums at our own studio, like he did on the Cilice album ‘Deranged Headtrip’. All guitars I recorded at my home studio. Later on we re-amped the rhythm guitars. All strings, horns, accordion and double bass were recorded at the WarningStudios in Amsterdam, which took us four days.

For the mixing we worked at two separate studios. Bjørn Warning, who recorded all the horns and strings, took care of drums, rhythm guitars and bass. All the other instruments and layers we mixed at Kox-Ramak Studio, it was great working with David Cox. At the end all tracks came together at the WarningStudios. We did some last tweaks and get to the final mixdown. In the Inlinemastering Studio, mastering engineer Wim Bult used – besides all the digital mastering tools – a Studer: an awesome classic analog tape recorder, which gave the recordings more warmth and depth.

Are you planning a tour with Cilice Orchestra? And outside the Netherlands? Big tour?
Of course, but it needs time. Support, good promotion, bookers and financial support are what you need to make it happen. We are ready to roll. I know there is a big audience out there who would love to see this thing live. People seem to be me more open minded nowadays, there’s a lot happening in some music scenes I noticed.

And how are you managing it with all the members you need on stage? Or just a selection of musicians?
Cilice Orchestra is very flexible. We could play as a full line up or in smaller settings, like Cilice plus at least two or three jazz musicians. Because I’ve got all charts written down, it even would be possible to play an invitation anywhere in the world with guest musicians. We could perform at more experimental modern contemporary festivals, jazz venues, rock venues or even at big festivals. Besides that we started to work with this amazing music software Ableton. Because we have a strong vision how we would like to use this software live in the future, it will be something different and exciting.

I like the artwork of the album. Who made it and what does it mean?
I’m glad you mentioned the artwork. Two friends of mine – great artists who work under the name ‘Pipsquitwashere’ – were invited in München at a big art festival. They made this big graffiti, about 4 meters by 4, with Cilice Orchestra music in mind they told me. Took some pictures of this piece before they sold it. That’s what became the album cover. I think the artwork fits the music perfectly, it’s original, wild and urban.

My last question as usual: what’s your advice to young starting heavy bands?
Get on stage as soon as possible! It’s the best way to develop yourself as a band. You have to deal with a lot of unexpected circumstances, which you can’t learn anywhere else.