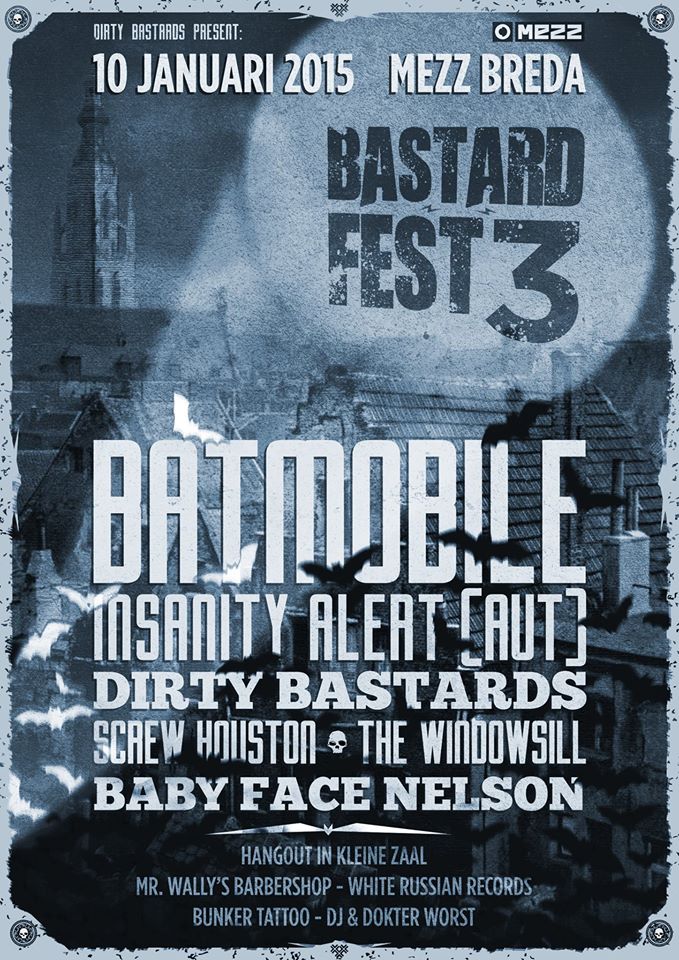 On the 10th of Januari 2015 it’s time for the 3rd edition of Bastard Fest! Anton interviewed organizer Jelle van Dun to talk about the festival, his drive and the future.

Hi Jelle, how is it going with the preparation of Bastard Fest?
Well, I hear from many people that they appreciate the lineup, so I think it’s going to be very busy!

For those who do not know Bastard Fest, can you give a introduction?
It began as a party that we wanted to give with our band Dirty Bastards. We would like to add some bands to the bill that we like a lot. At the same time we would create another cool rock ‘n roll festival for lovers. We always want to do everything right, so we worked together with good promotion and people who helped on the night itself. The first night was sold out in Boulevard (location arranged by POB). So we knew that our concept of good punk / speedrock bands works in Breda. Line-up was: Dirty Bastards, Dirty Denims, The 101’s, Rene SG, host Fleur von Z and DJ No Horse Power.

For the 2nd edition, we have been contacted via POB with MEZZ. With this edition, we have proven ourselves and now a beautiful partnership with one of the best venues in the Netherlands is born. I did the programming they produce. Very nice, I also could enjoy the evening. Because we want to create a festival feeling, we have an additional stage in the main hall built to let bands play quicker after each other. And we have Mr. Wally’s Barbershop and Doctor Sausage invited to bake hot dogs. In the 2nd edition the programme was a little larger, with rockabilly Bang Bang Bazooka. And we had a nice revival of our favorite local band: The Gecko Brothers.

On January 10th, 2015 is the third edition of Bastards Fest. Do you see much difference from the first edition?
We are back bigger and fatter! For the the next edition, we have the same concept, but more elaborate and a big headliner. We have invited our local and world famous Psychobilly’s Batmobile. They play anywhere in the world, but the last time in Breda is 6 years ago. Also, we have our first foreign act Insanity Alert from Austria (with Dutch frontman Kevin from The Apers). We also have the small room added to the program, where people can hang out. Bunker Tattoo is there with on/off tattoos, the White Russian Records label with a record-market, Mr. Wally’s Barbershop is back and we have a DJ and last but not least a good bar. The 2015 line up: Batmobile, Insanity Alert (AUT), Dirty Bastards, The Windowsill, Screw Houston, Baby Face Nelson, DJs, Bunker Tattoo, White Russian Records, Doctor Sausage and Mr. Wally’s Barbershop.

Is there more budget became available for the third edition?
Yes, now we got a budget increase of Mezz to book a fat headliner.

With how many people do you organize the festival and how much time does it take?
I do it mostly myself, with some help from my band. And Mezz is doing their promo, helps with programming and doing production-section with a nice team. Takes considerable time, but on the night you get such a kick and people are enjoying themselves, so that’s all worth it.

What are you doing to promote Bastard Fest?
Social media, especially FB. Promo videos, share news of the bands, etc. And offline all kinds of celebrations posters and flyers. MEZZ also helps us. And we take the offline stuff also at our gigs, as recently by Bastard Fest On Tour (smaller evenings with BF bands in other parts of The Netherlands). We make the posters and videos ourself and ask the bands to make a little video.

Which bands on the Bastard Fest you most like?
All, because I picked them, haha. If I have to choose really, then it’s our own performance with Dirty Bastards, because playing with your own band is the best thing there is!

Everything on Bastard Fest is about dirty rock ‘n roll and punk. What can visitors expect else?
A super cozy Breda atmosphere and a great time.

How does Bastard Fest looks like in about 5 years?
Hopefully a winter and summer festival. In the winter, much like now, and in the summer Bastard Fest Outdoor. That would really be genius, and I think a nice contribution to the festival landscape in the region.

Would you have something urgent to tell or have told you enough?
Everyone come to Bastard Fest! More information an tickets at www.mezz.nl/bastardfest