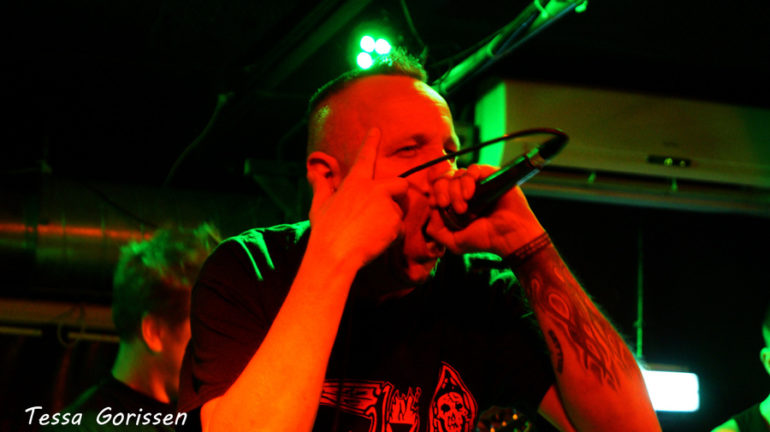 14-20 September, 2015 | Tilburg – The Incubate Festival in Tilburg introduces us to a lot of old and new metal, punk and hardcore bands. It brings more than 200 artists in an intimate context to an international audience. Incubate took place on 14 to 20 September 2015 in over 20 locations in Tilburg (NL). Tessa was there for 5 days to write a review of this great festival.

Day 1: Introducing to the festival

Teethgrinder
After looking in the Midi at an indie band, the real work begins. The Dutch Teethgrinder is rocking the Hall Of Fame. At the first song singer Jonathan Edwards falls of the stage but stands up immediately to continue the show. From the beginning there’s a lot of jumping up and down and running on the stage. The band doesn’t stand still for a minute. One disadvantage: Sometimes the volume microphone is a little too low and you can’t here the vocals. Otherwise, the backing vocals are perfectly clear. But the band and most of the people don’t seem to notice it. An amazing band to start the festival with. Entrapment
Also in the Hall Of Fame is the show of the Dutch band Entrapment. That the music is the main part of the show, the guys make clear from the very first beginning. There’s almost no vocals in the songs: Most part it’s just hard guitar riffs and a strong drum. But the band is pretty good. Like an advanced band the guys are playing a hell of a show. Too bad there weren’t much people to look at them, but still it was an awesome show. Tarantino
For PitKings the evening ended with the guys of Tarantino. It becomes pretty clear that the guys bought a lot of people with them. Everyone knows each other in the hall of Little Devil. As special guest the old singer of Otis grabs the microphone to scream along with Tarantino. This show is definitely the only show where all the people move. Moshpits are starting when the heavier songs start. Noveau Vélo
The second day we say Noveau Vélo, a Dutch indie rockband. Not much people came to see the guys perform, but still they have a lot of fun. They play their asses of in the Dudok and make a good act out of it. Guess we’re gonna hear a lot more of them in the future.

The Melvins (USA)
The Melvins is a band everybody need to have respect for. Even after all these years the band can play two nights on Incubate. Two different shows, both one and a half hour. And what a show! From the beginning there’s a lot of energy and the guys keep jumping and running on the stage. Some of the crowd even say they’ll come back tomorrow for the second show. Day 3, a day with surprises

Burn The Iris
The first band we see is the Dutch groove death metal band Burn The Iris. They’re playing in the Little Devil this night. At first there aren’t much people, but when the band has played a few songs the Little Devil is almost full. The songs of Burn The Iris are very powerful. A mixture of hardcore and metal fills the Little Devil from the first notes. The people who are there seem to love it, but just like at the other bands, there’s no movement at all. Too bad, but the show was definitely worth going to. The Glockenwise (POR)
Then we head over to Stadskelder to see The Glockenwise. The first thing we notice is the venue: a basement in a chic hotel. And there they are: four guys from Portugal. A totally different genre then the bands we saw earlier this week, but still very noticeable. Their music sounds a little like a mixture of The Kik and The Beatles. A big advantage: the technical part isn’t that good at all. Sometimes you can’t even hear the voices above the guitars and drums. But on the other side: they’re playing very good. Still we’re here to hear the music with vocals. Not the best performance so far. But definitely a band to remember and listen to in the car or train.

The Melvins (USA)
After Glockenwise we needed to go to the Midi. The Melvins’ second performance will begin in a few minutes so we need to hurry. Again a lot of people came to see this band. With a new setlist and new clothes they’re gonna rock the stage for the second time. The show starts with a drumsolo of the two drummers. It takes ten minutes before the others come on stage, but what an amazing drumsolo! The guys show that they’re very good at what they’re doing and they deserve to be in the spotlight tonight. But, just like the day before, singer Buzz Osborne steals the show with his flamboyant performance. Kru$h
Our day starts at the Little Devil for Kru$h, a Dutch crust grindcore band. The few people who were at the Devil to see this band stand pretty still the whole time. Even though the band is pretty energetic, it’s not helping the crowd to move. Too bad, because the set is almost flawless. With songs with an average length of only 2 minutes, they bash themselves through their songs. VVOVNDS (BE)
After Kru$h we’re heading over to Hall Of Fame where the Belgian band VVOVNDS started playing. Sludge, hardcore and grindcore are combined with the songs of this band. At first I don’t know what to think about this band. The singer is standing in the middle of the crowd. He’s screaming and making weird noises and the crowd is watching carefully. But when I get used to their music its very interesting. A good alternation with the other bands this evening. Tio Gringo
Back to Little Devil, where the thrahs country band Tio Gringo is ready to climb the stage. For most of the people in the venue this isn’t an unfamiliar band. They brought a lot of people from their hometown Breda with them. It’s a country party on a high level. On a very small stage the band has not much space to play their instruments, but they’re making the best out of it. All the people are dancing and moving and singing along. When singer Bonny climbs the stage everyone is cheering. This show is really one of the highlights of Incubate this week. Skeletons Of Society
Because of the traffic jams the first band, Skeletons Of Society, came in way too late. Therefor this band from Heemskerk start round 19.30 with their show. But the staff of Little Devil says the band has to quit after 15 minutes. Of course the band got mad, but they still start with their performance. Even though they sound-checked for like 10 minutes the instruments and microphones are very clear. But the show is a little messy. Guess it’s because of a accommodated setlist, but still the band has a lot of fun on stage playing a mix of thrash metal and hardcore. The drummer don’t even wanna stop after the set and plays along after the last show. With a grim on his face he leaves the stage. Hidden Guns
After a quick change the second band climbs the stage of the Devil. A Dutch punkband with an attitude: Hidden Guns. It becomes pretty clear that this band has a lot of energy and fun. The singer is recovering from a stroke, but you can’t notice anything about that. They’re jumping, laughing and making fun of their own show. With a bottle of champagne they play an energetic show with straight forward, in-your-face punk rock. When the stage-manager ask them to stop, they play along. “Just one more song” and that becomes two. After Tio Gringo definitely one of the better shows of this week. Angstgegner
The Dutch hardcore punk band Angstgegner is the third band in Little Devil this evening. Because of the delay the band decided to play a shorter set than usual. But still it’s very energetic and amazing. With the former singer of the Dutch band Otis, this band turned out to a four-headed hardcore band. A lot of people in the venue came especially for this band. And justified: the band’s spirit befalls on the public, which is moving the whole time. No moshpits, just moving. A cool band to spend the evening with. All For Nothing
The last band we see this edition of Incubate is good old All For Nothing. A female-fronted hardcore band from Rotterdam. From the very beginning singer Cindy is jumping up and down and on one moment she even jumps of the stage because of less space on it. It’s the first band we saw this weekend who talks about the origin of hardcore and their standards. Good to end an amazing week with.