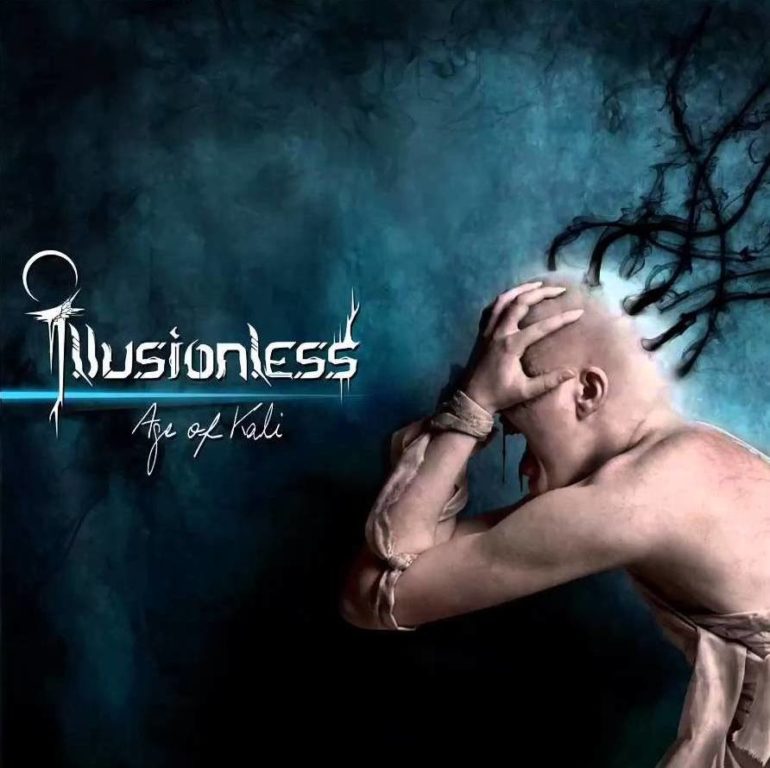 Illusionless, a four-headed band from the Netherlands, plays death metal with progressive- and black metal influences. Since the founding in 2011 they shared the stage with bands like At The Gates, Fleshgod Apocalypse and Obituary and played at festivals like Eindhoven Metal Meeting, Stonehenge and Baroeg Open Air. They also released the very well received EP ‘Rulers of the Sane’ in 2013 and were the winners of the band competition ‘Metal Battle 2014’. With their debut album ‘Age of Kali’, released in January 2016, they’re now touring all around the country. Time to find out what this new album is all about!

The album (or EP when you look at the total playing time) starts with the song ‘Horror Vacui’. A dark and sinister intro fills the room and when you think the intro is over, it continues for a few seconds. From then on the band is hard, fast and filthy. The smudged voice of Melle Brouwer is well-heard and the instruments don’t overwhelm it. It’s just as we expect of Illusionless: hard, but not to effusive. With the second song ‘Way of the Dark Creatures’, the band leaves no rest. In full speed the band continues the album. In this song you can definitely hear the influences of black metal, but they also stay true to the slam and metal sound.

The song ‘Sky of Mirrors’ starts with a slow intro, which prepares the listener for the further minutes. Different than the other songs is that in this song you can hear backing vocals which amplifies the harsch voice. Also different is variety in tempo. It’s up-tempo, but sometimes there’s a break. As well in vocals as in instruments the speed of the song ranges almost every second. Which leads to a arranged chaos. The fourth song is ‘Malevolent Manifestation’. In this song Illusionless holds on to their roots in death metal, but sometimes you can hear the core influences. The song has a lot of breaks in the beginning, middle and in the end. It’s not that arduous to listen to, even though the music is pretty heavy. The band knows how to keep the attention of the listener in this song.

The next song is ‘Aletheia’. This is the fifth song of the album. It starts immediately with hard guitar sounds, followed by a more symphonic melody. This two-minute song is just instrumental, where the band shows their skills on the instruments and where they can give Melle some rest during the show. Age of Kali ends with ‘Extinction’. It’s a very good choice to end the album with. They blend all the styles together, which gives the impression that it’s one big mess, but also very nice listening to. Their abilities come together and they end the album in style. And that’s what keeps this band going strong worldwide.

Conclusion
What makes it a good album and an example for other bands? This band stays true to their own sound, even though they have a lot of influences. The songs are one of a kind, not always the same melody and you can hear the fun the members of the band have in their music. In short: Illusionless did it again and we’re gonna hear a lot more of them in the future!