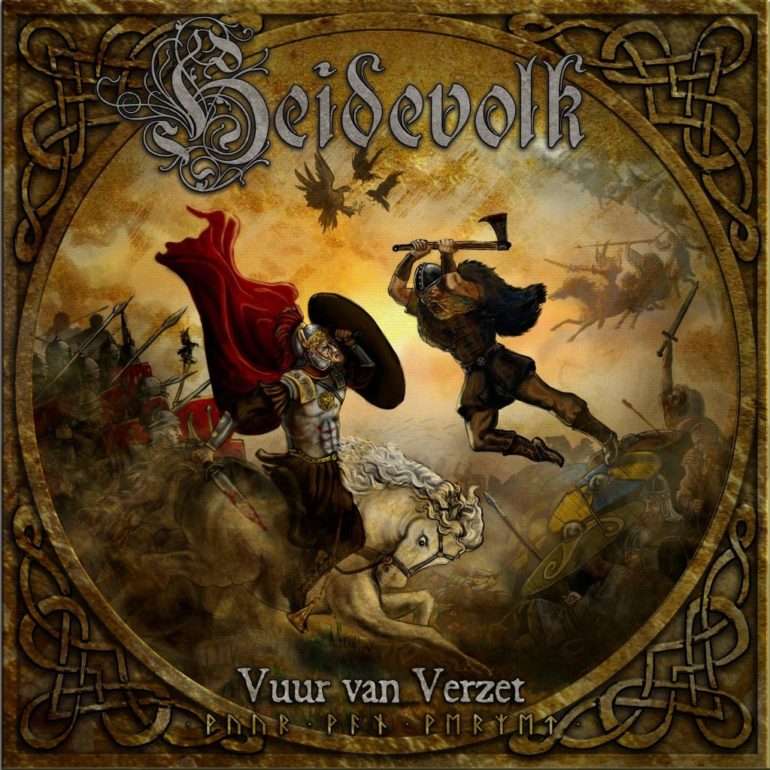 The Dutch pagan/folk metal band Heidevolk is around since 2002 and especially the last years they are going fast. Actually they are one of the most popular folk metal bands from the Netherlands, as they sing most of their lyrics in Dutch. They released a brand new album called ‘Vuur van Verzet’ on January 12, 2018. For this album vocalist Mark Splintervuyscht was replaced by Jacco de Wijs (ex-Conorach) and guitar player Reamon Bomenbreker was replaced by Kevin Storm.

The album kicks off with ‘Ontwaakt’. A medium tempo song with a bombastic vibe, which is eventually a typical battle/hero song. Actually most of the songs on the album are, just like the Dutch lyrics. The compositions of the songs are executed very well. There’s a lot going on, like the use of samples, a male choir, bombastic bridges, symphonic elements and sharp melodic solos and tempo changes. The most songs are slow folk metal songs, but ‘Britannia’, ‘Onverzetbaar’, ‘Tiwaz’, ‘Gungnir’ and ‘Woedend’ are basically faster and in my opinion the most interesting ones. Heidevolk is also coming with some surprises! First of all two acoustic folk (metal) songs called ‘Yngwaz Zonen’ and ‘Het Oneindige Woud’, which create some moments of rest on the album. Secondly a guest appearance by Alan Averill (Primordial) at the song ‘The Alliance’.

The sound and production of the album is alright, but the flat and in a certain way cheap sound of the lead guitar is quite annoying during the album. It should have sound lower, more aggressive and with more body in my opinion. It’s a strange choice, because the rest of the instruments sound warm and are mixed very well. Just a minor detail, because overall Heidevolk come up with a very solid album. It’s maybe a little bit to much over the top when you’re not into folk metal, but I like the vibe they created of having a good time together and drinking beers. I enjoyed the album and I like the way how they take me with their music to another (ancient) world. I can’t wait to see them live at the Melkweg, Amsterdam on February 18th!