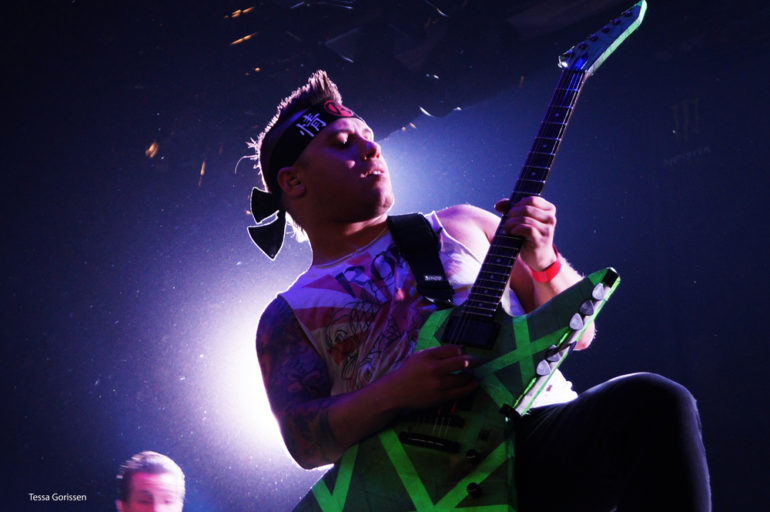 May 1-3, 2015 | Groezrock 2015, Meerhout – Tessa headed to Meerhout, Belgium for the first day of the Groezrock festival and saw a lot of amazing bands. Check her review and pictures here at PitKings, including one picture from Markus Hillgaertner. Black Sheep
When we talk about punk, this band can’t be forgotten. They play for 10 years now and have been playing in many European countries and now they’re playing on the Macbeth Stage in the afternoon. There weren’t a lot of people there to see them perform, but that didn’t bother the band to play an energetic show. The little mistakes and a guitar that didn’t work the way it had to be didn’t get the crowd’s attention. But you could see that most of the people were only there to wait for the next bands they liked on another stage. Besides that, they clapped for the band. Whitechapel
Even though Black Sheep wasn’t finished playing, we headed over to the Impericon Stage to see the last few songs of Whitechapel. This deathcore band played at Groezrock before, but now they’re back. The dark mysterious stage fitted perfectly at the show and the crowd was having fun with moshpits and crowdsurfing. Sweat and beer were flying through the air. The band played a lot of their latest album ‘Our Endless War’. The crowd seemed to love it and the band was satisfied. While She Sleeps
After a little break While She Sleeps climbed the Impericon Stage. With their new album ‘Brainwashed’ released in March they’re back and ready to destroy the tent on Groezrock. From the beginning the band gave them all. The crowd had a lot of energy, which made the band play even harder. In In the public one after another was crowdsurfing and some of them cheered when they ended up in front of the stage. A little smile appeared on the band’s faces by seeing it. Against Me!
Right after that we headed over to the Monster Energy Stage where Against Me! started playing. We’ve seen this band play before a month ago and since then they made a lot of progress. Singer Laura Jane Grace is transformed in a whole new person and is smiling more. They all seem a lot happier and the crowd feels the energy of the band. A lot of moshpits started right after the band started playing and didn’t end till the last notes.

Atreyu
After a small break, looking around and hearing some bands perform on other stages, it was time for Atreyu. They played in the early evening on the Monster Energy Stage. The tent was half filled with people but the band did their very best to make it a good show for those who were there to see them. Even their cover of Bon Jovi’s ‘You Give Love A Bad Name’ came along, which made everyone sing along. Even though not everyone knew the band it was a good show. Maybe not the best of the day, but that didn’t bother. Suicide Silence
In a hurry we headed over to the Impericon Stage for Suicide Silence. A lot of people had the same idea and the tent was totally filled. Not a big surprise because a lot of people were talking about the band the whole day. The band played a lot of new songs but even the older ones weren’t forgotten. They thanked everyone for being there a thousand times and were really grateful to perform in Belgium. They played an amazing show, gave a lot of energy to the crowd and showed everyone they love being on stage.

It was a day not everyone should forget in a long time! We saw a lot of amazing bands and we could see the crowd had fun on the first day of Groezrock.