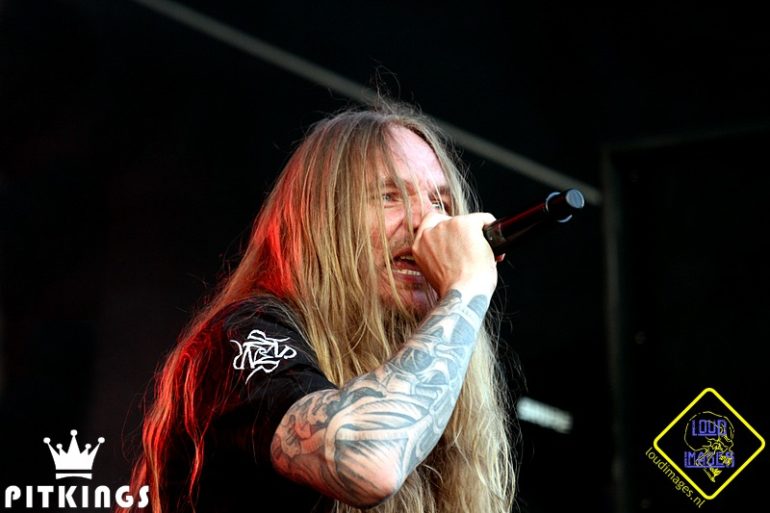 June 4, 2016 | Goffertpark, Nijmegen – After a week of heavy rain and thunderstorms, the 4th of June had lots of blue sky and a blistering sun! Like last year it was hot, but with one big difference this year: Fortarock would be 2 days of metal and heavy rock! Day 1 on Saturday (check the review of day 2 over here) can be considered as a ‘Dutch metalday’ including Hibakusha, Heidevolk, Legion Of The Damned and Within Temptation.

Evra (DK)
Evra is a Danish band and earned this spot by an exchange program with “Buma Rocks!” and “When Copenhell Freezes Over”. It’s clear this band hasn’t much experience on big festivals and with large crowds. It sounds interesting, but mostly it is quite chaotic and not very well timed. The bass player draws the most attention, by only wearing shorts while showing his heavily tattooed body. After 3 songs no one is watching him any more, because 2 bare chested ladies enter the stage with velvet hoods over their heads, a large knife held in both hands, pointed upwards at face height and a tiny g-string. It’s a bit illustrative that most people talked about the bare chested ladies and not about their music. Tremonti (USA)
A bit of a surprise to see Mark Tremonti and his band at this time of day, but no one is complaining. Tremonti performs in the tent and it is quit filled up. The difference with the previous act couldn’t be bigger; Mark Tremonti and his band ooze professionalism and handle the crowd with ease. The quality of the sound at the beginning of the show wasn’t great, but it took the technicians just a few minutes to correct it. Musically there is not one bad word that can be said: it’s superb! The only down side is, that there is not much happening on the stage to look at. But with the heat building up in the tent, it might have been a wise choice do move as little as possible. Hibakusha (NL)
Hibakusha has won this spot on Fortarock’s small outdoor stage and is given the change to present themselves for a large crowd. They look a bit nervous and it’s a bit pity to see that this doesn’t stop when they start to play. It doesn’t sound bad at all, but it’s quite nervous to look at. Maybe that is the reason for some of the little mistakes that are made during the show. All in all not a bad performance. I hope to see them again with lower stress levels. Avatar (SE)
Now this is a performance! The tent is quite packed and the crowd knows what is coming next. When Avatar enters the stage, it’s getting loud! The band plays some songs of their new album, and a lot older songs which are all sung along. Front man Johannes is sweating profoundly and his make-up is flushing of his face. For a photographer, this band is real eye candy! No one seems to mind Johannes isn’t reaching the high notes every single time or being a little off key on occasion. Their performance generously makes up for all those minor details. The sheer joy this band is having on stage is contagious and when Avatar is done, no one has a dry stitch on their back! Again a super performance of Avatar. Heidevolk (NL)
On thing is clear: Heidevolk had probably the shortest driving distance to Fortarock. Their folk metal is based on myths and legends of the Veluwe, a nature reserve in the Netherlands. It’s a bit different than other metal bands, because almost all songs are two-part-songs, sung by 2 male singers in Dutch. Although they are a regional band whom sings songs of regional myths and legends, Heidevolk travels the world with songs about the Veluwe. They’re quite successful at it! Even though on the small outdoor stage, the attending crow is mind blowing. It looks like the chaps enjoying the show too, but the heat building up in their leather vests makes them wipe their brows and foreheads a lot. Great show! Gojira (FR)
For many metalheads at Fortarock, Gojira was the band to go and see this day. Gojira played in the tent which filled up quite nicely. The performance of Gojira was flawless and was very, very well put together. Although the crowd was very enthusiastic, the band members remained rather stoic. There was little movement on the stage an hardly any interaction with the crowd, except the occasional shout to the crowd between songs. Worth mentioning is the light show of Gojira. It was varied, supportive of the music and even outside the tent in broad daylight it was very visible! Legion Of The Damned (NL)
When Twan van Geel enters the stage, he takes his stand and is staring angrily into the crowd. I hear a young lady behind me say: “I think he’s very good looking, but when he’s looking like that it always give me the creeps”. Twan gets to stare quite a bit at the massive crowd in front of the outdoor stage before Legion Of The Damned starts off. The thrash metal of this band excites the crowd a lot and maybe because of the setting sun and a slight drop in temperature, there’s some action in front of the stage and a lot of heads are banging. Personally I enjoyed the hell out of this act! Within Temptation (NL)
Just days before their performance on Fortarock, it was announced that Within Temptation won the Dutch Export Award and they even appeared on national television. Within Temptation is headlining this day and that is noticeably. The stage is build in the tent and has a high riser on which Sharon spends quite some time. This is perfect for the audience in the back to see her on the stage too. There are a lot of LED screens, which projects flames and other applicable images and videos. The show is smooth as silk and well put together. During the song ‘Silver Moonligh’ Sharon introduces a special guest no one expected: Caroline Westendorp of The Charm The Fury. A brutal touch in combination with the clean vocals of Sharon. All in all the sound of Within Temptation is perfect and the band is having a lot of fun on stage. This normally guarantees a top show and they did!