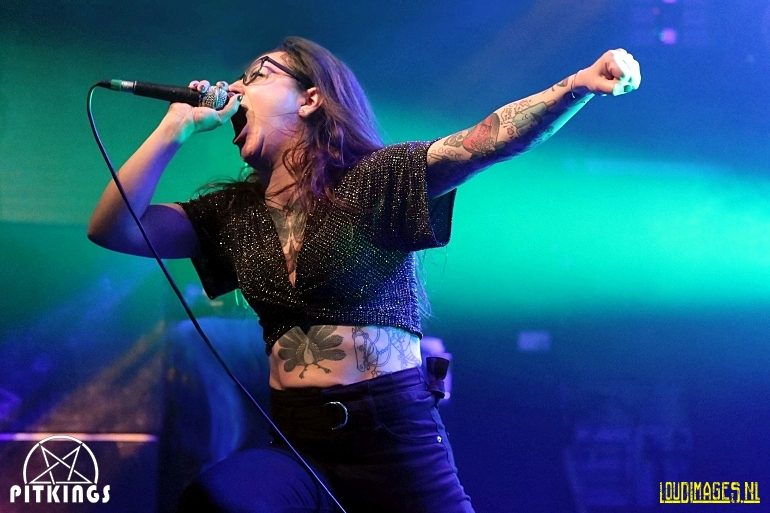 April 5, 2019 | Gigant Apeldoorn – Tonight Gigant is the host of For I am King’s club tour “I” in The Netherlands. Their in December 2018 released album even got a 9.1 score on Pitkings and I had no doubt in my mind that this band could live up to that expectation on stage, because I have seen them a few times before.

With Sisters Of Suffocation and Hibakusha warming the venue up for them, this is going to be an evening filled with some brutal metal!

Hibakusha (NL)
People still file in, as the first band of the evening start their set. There is not a crowd yet, but it isn’t empty either and people order a drink and getting closer to see what the first band is all about.

There is no mistake on the sound of Hibakusha, this band is right in your face from the very first second. Since the last time I have seen them, they appear to be louder and more aggressive; and I quite like that! Their grooving metal combined with some hardcore elements is very interesting. It is always good to see bands exploring their sound even more.

The now rapid growing audience is having a blast. I did not see a moshpit or something like it, but a lot of heads were bobbing.

Sisters of Suffocation (NL)
Quite some time has past since I have seen Sisters Of Suffocation, so I was curious what they would make of their just recent released album.

Since last year, the Sisters Of Suffocation are not an all female band anymore. After some changes on drums, Kevin van den Heiligenberg holds that spot now and I must say, that has been rather good choice!

Kevin is going at it on the new album and live. His drumming is worth listing to by itself; the tight pounding changes direction almost every few seconds and is pushing the pace of the songs to new heights.

In front of Kevin there are now four ladies, as Emmelie Herwegh is added to the band on guitar. With two guitars the sound is much, much richer and varied.

The band has matured in every way and is a joy to hear and see them perform.

They even got a ballad nowadays called Liar, with a very nice guitar intro of Simone van Straten. Of course the term “ballad” must be taken lightly, because it is still brutal death metal, but the breaks are very, very nice!

It is getting pretty busy in the venue now and there is some movement in the crowd, but it is kept civilized.

The set consists of a lot of songs of the new album of course, but the previous album and EP are not forgotten.

This gig was impressive. Singer Els keeps amazing with her voice and she and the rest of the band is putting on a real live show. Not only is there a lot to hear, but it is fun to watch too!

Is there no critique at all? Yes there is; they didn’t play “Brutal Queen” 😉

For I Am King (NL)
The main course of this night is the Dutch metal band For I Am King, with singer Alma fronting this band. Alma was spotted in the audience multiple times when both other bands played and seemed to enjoy herself quite a bit.

When the band is announced Alma is the last to walk on the stage and when she spots two young girls on the edge of the stage, she gives them both a high five before she starts the first song. Both little girls beam with pride!

This is something Alma masters; she has a connection with her crowd and keeps them involved. She high fives several people in the audience during the gig and is pretty talkative in between songs.

It amazes me every time when I see and hear Alma sing. Damn! what a voice this woman has! It sounds somewhere between bewitched and satanic at times!

The show is slick and very well put together and the pretty well filled venue is having a blast. Alma is calling for a moshpit; she gets it instantly. Alma wants a circle pit and she even gets that. When she demands a wall of death, she is even getting that!

There is even time for an encore and everybody is getting loose for the last time before DJ Earik and DJ Hans take over.


Conclusion
This was some night of metal!

The build up was perfect and the grade of the bands was high. With a decent crowd present there was a nice atmosphere too.

Sisters of Suffocation impressed me the most. They gave a great show and played a great gig. Hibakusha did a great job and For I Am King is a well oiled machine which holds no prisoners.

After a night like this, Noting beats a bike ride home after midnight. To appreciate the noise, you must appreciate the silence too, and in Apeldoorn that isn’t all that hard to find… both!