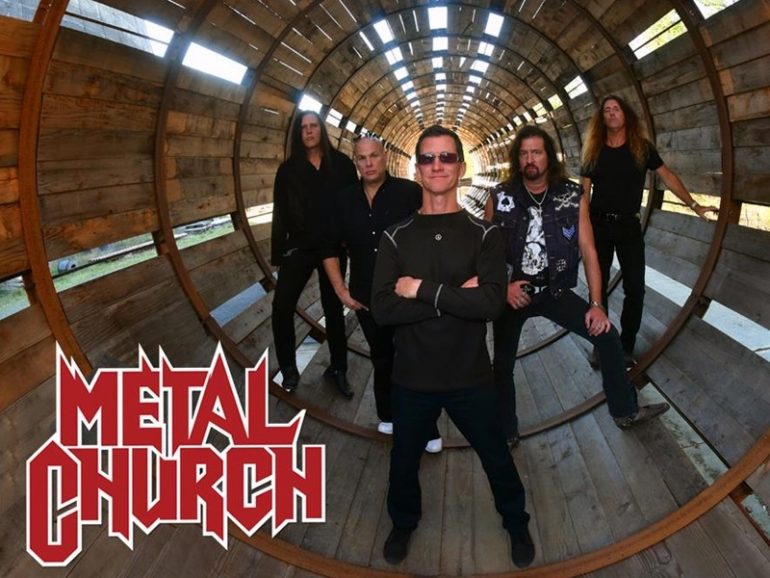 After Monster Truck, Sepultura and Melechesh, it’s now up to the American thrash metal band Metal Church to take part of the Dutch Metal Quiz 2017. At Graspop Johan and Lennart had a chat with vocalist and Mike Howe. Before we start, we share our review of their performance at Graspop with you.

Metal Church: classic thrash metal as we like it!
The American thrash metal band Metal Church can be considered as one of the pioneers of thrash metal. They we’re founded in 1980 and released their debut album ‘Metal Church’ in 1984. After some line-up changes and sabbaticals, the band released their latest and eleventh album ‘XI’ in 2016, the first album since 1993 featuring Mike Howe on vocals. The band knows what the audience wants here at Graspop: classic thrash metal. And that’s what they bring them! The crowd in front of Mainstage 2 is responding very enthusiastic on the old classic songs like ‘Beyond The Black’ and ‘Start The Fire’, but also on the songs from the new album like ‘Killing Your Time’ and ‘Needle and Suture’. Classic thrash metal as we like it! Metal Church is still a band with a lot of quality, so hopefully Mike & Co are goings strong for a few more years!

We talk to Mike after their show and he tells us he won’t score much points with this quiz, because he has been out of the scene for 20 years! During this long hiatus, he was busy with his own carpenter company. Before we start we ask him if he knows how John Marshall is doing. He was guitar player for Metal Church and also the guitar tech for Metallica back in the day. Mike: “He’s great! He is still a friend of mine. Actually he’s visiting at my place in California as we speak, while I’m here in Europe on tour. He’s visiting because his daughter is going to study near our home.” Let’s start with the quiz. The rules are simple. When you know the answer without the options you receive 3 points, when you know the answer with the options you get 1 point. Are you ready? Go!

3. What’s the name of this Dutch symphonic metal band?
A. Epica
B. Delain
C. Nemesea