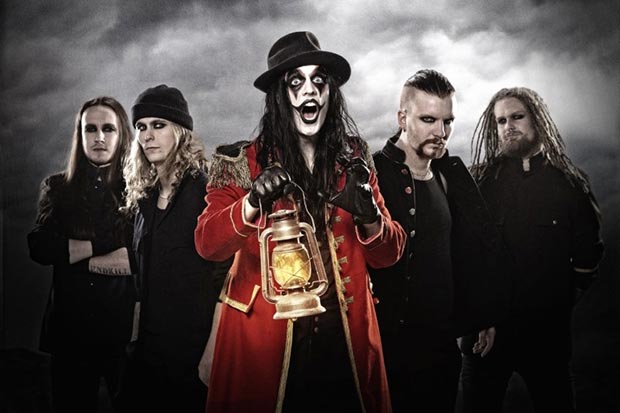 We are reaching the end of the year and as traditional it’s time to share the last results of the annual Dutch Metal Quiz with you. After Monster Truck (12 points), Sepultura (17 points), Metal Church (10 points) and Melechesh (30 points), it’s now up to the Swedish heavy metal band Avatar. At Graspop Johan and Lennart had a chat with vocalist Johannes Eckerström. Before we start, we first share our review of their performance at Graspop with you.

The freakshow called Avatar
Avatar opened the Main Stage on Saturday at 11:30. It’s their first time ever at Graspop and it’s early in the afternoon, but there’s already a big crowd for those Swedish guys. It shows there popularity and with this performance they show us why. What a freakshow! The total package of damn good solid metal, stage performance, energy, passion and show is just amazing. Even on a sunny afternoon! It would be better to see this 5-piece metal band in the dark Marquee or late at night on the Main Stage, but it already was a spectacular rollercoaster. The band is only playing songs from the last three albums (2012-2017) and none of their first three albums (2006-2009). No hard feelings and obviously a good choice, because the crowd is singing and screaming along with al the songs. From their latest album ‘Feathers & Flesh’ they play the three tracks ‘The Eagle Has Landed’, ‘Blood Angel’ and ‘New Land’. They end their setlist with the most popular song ‘Smells Like A Freakshow’, while the audience is going crazy. Avatar brought us a stunning show and I’m sure these guys will return soon to Graspop. Hopefully on a more respectable time!

The enthusiastic, painted clown on stage turned into a quit and friendly guy in front of us. Very funny to witness. We talk to Johannes after Avatar’s show and he tells us he won’t score much points with this quiz because he’s tired. “Yesterday we played at Hellfest and after the long journey we are a little bit wasted”. Well, let’s find out. The rules are simple. When you know the answer without the options you receive 3 points, when you know the answer with the options you get 1 point. Are you ready? Go!

1. From which Dutch symphonic metal band is Sharon den Adel the lead singer?

7. Who was the female lead singer of the Dutch gothic metal band The Gathering?

9. What kind of metal do the Dutch bands Sinister, Asphyx and God Dethroned play?
A. Death metal
B. Black metal
C. Progressive metal