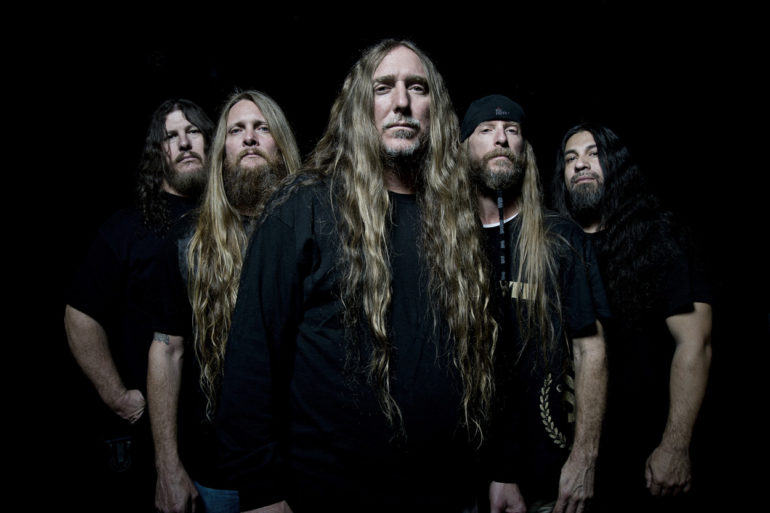 Obituary. A name almost everyone in the metal scene knows. Even though they had a busy schedule, they found time to do our ‘Dutch Heavy Music Quiz 2015‘ at the third day (April 19th, 2015) of Neurotic Deathfest. Tessa checked the Dutch music knowledge from the brothers John (vocals) and Donald Tardy (drums) during a very nice interview!

Tessa: Guys, we’re gonna do a quiz about the Dutch heavy music scene.
Donald: Oh God, we don’t know anything about Dutch music. You should have asked Trevor, he knows everything. I think we’re gonna be shaking our heads because we have no idea. Well, that’s what’s gonna happen, but I’ll be honest. I don’t follow metal music. Nothing. Really. And he’s even worse.
John: Let’s just say: I’m ten years behind with music.
Tessa: Well, let’s try it then. There are some ‘rules’: When you answer the questions immediately you’re gonna get 3 points and when you ask for a multiple choise you get 1 point.
Donald: Well you have to make a new category for people who don’t know the answer even with the options. We’re gonna see.

Question 2: What is the most succesfull gothic metal band ever from The Netherlands?
Donald: From The Netherlands? I don’t know any Dutch bands. Can you name one band, John?
John: Why you put me on the spot man. I don’t know any of them!
Donald: Ehh. They’re probably friends of us but I never paid attention to it. Let’s just pick a random band from our tour last year. No that’s just gonna look stupid.
John: Again the multiple choice here.
Tessa: A. Evanescence, B. Lacuna Coil, C. Within Temptation.
John: I have no idea… I’m not into music.
Donald: Lacuna Coil is from America I thought. So that’s not even the option. I don’t know!
John: This is not good… No idea.
Tessa: It’s Within Temptation.
Donald: Who? Never heard of them. That shows how stupid John and I are.

Question 5: Which Dutch hardcore band toured around the world with Six Feet Under, Soulfly, Sick Of It All, Madball and Hatebreed?
Donald: (Sigh) A hardcore Dutch band?
John: (With a very high voice) NO IDEA! Multiple choice.
Tessa: A. No Turning Back, B. Backfire, C. Born From Pain.
John: No Turning Back.
Tessa: No, sorry guys. It was Born From Pain.
Donald: Born From Pain? Never heard of them.

Question 6: Who was the original female leadsinger from the legendary Dutch gothic metal band The Gathering?
Donald: That’s not my generation of music… (shakes his head). Multiple choice.
Tessa: A. Anneke van Giesbergen, B. Simone Simons, C. Sharon den Adel.
John: I can’t even pronounce any of those names out loud.
Donald: Eeh, Simone Simons.
Tessa: No.
Donald: Damn it! Who is it then?
Tessa: Anneke van Giesbergen. The most difficult name.
Donald: We should have brought Trevor with us this time. He has like 4000 albums, he should’ve known these questions. He collects everything, also Dutch. We are the opposite.

Question 7: Which Dutch music project had Bruce Dickinson, James Labrie and Devin Townsend as vocal guests?
Donald: I have no idea. We need help.
Tessa: A. Star One, B. Ayreon, C. Stream Of Passion.
John: I never heard of any of them.
Donald: This is a disaster. Oh boy… Eh Stream Of Passion. That was the only one I can remember of what you said haha.
Tessa: No, it was Ayreon.
John: No it’s not going so well..

Question 8: Which large metal record label was founded in The Netherlands in 1980?
Donald: Roadrunner Records?
John: No! Oh, Roadrunner is actually a good guess.
Tessa: Yes, it’s Roadrunner. You have 7 points now, with only two questions left.

Question 9: Which Dutch female singer is since 2013 the new lead singer for Nightwish?
Donald: (with high voice) No idea!
John: We need another multiple choice on this one.
Tessa: A. Maria Brink, B. Floor Jansen, C. Caroline Westendorp.
Donald: Ehhh. The first one.
Tessa: No.
Donald: Then it’s the second one!
John: Do we have a point for second guessing?
Donald: No we do have not.

Question 10: Which great death metal band from The Netherlands toured with Death through the USA in 1993?
Donald: Man…
John: Then we maybe have been with them on a tour. We need another multiple choice that’s for sure.
Donald: Then we even don’t know it.
Tessa: A. Textures, B. Legion Of The Damned, C. Gorefest
John: It could be Gorefest.
Donald: It probably could be Legion. Because I don’t know any of the other bands. Is it Legion?
Tessa: No. It’s Gorefest.
John: Sigh

Tessa: 7 points. It’s not that bad.
Donald: We played the best when we’re on the record label. Haha.
John: It is interesting stuff though. It’s actually a good idea, because I don’t know anything about Dutch music. I’ve learned something.
Donald: We failed!
Tessa: It wasn’t that bad. But thanks guys!

Obituary: 7 points. Check all the other bands who played the ‘Dutch Heavy Music Quiz 2015‘.