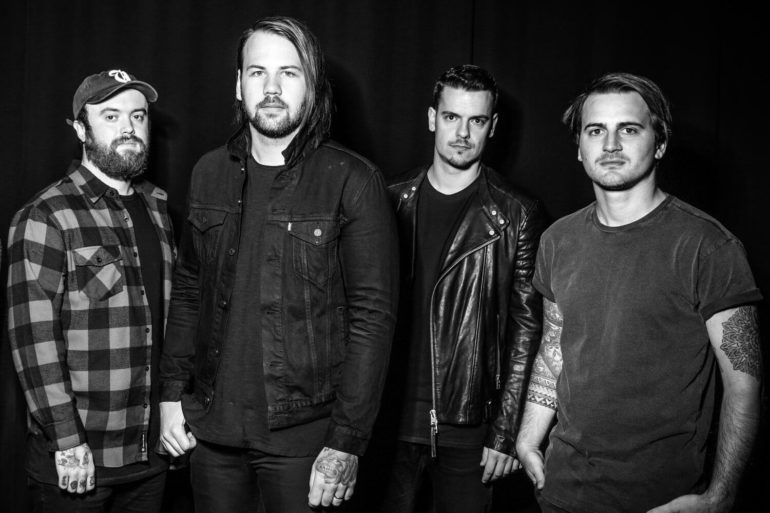 Candidate number 5 of the Dutch Heavy Music Quiz 2016 is the American metalcore band Beartooth. Can they beat the score of Soilwork (23), Moonspell (12), Grand Magus (7) or Municipal Waste (9). At Graspop Anton talked with all the band members of Beartooth and asked them 10 questions about Dutch heavy music.

1. Which Dutch magazine for metal music was founded in 1980 by Metal Mike and Stefan Rooyackers?
Beartooth: I have literally no idea!
Anton: I have three options for you.
Beartooth:: Let’s take the three options!
Anton: Metal Hammer, Aardschok or RockHard.
Beartooth: I go for Metal Hammer.
Anton: Is that Dutch?
Beartooth: Nnnnnnnnooo, I don’t think so… Haha….
Beartooth: RockHard? Maybe?
Anton: It’s up to you!
Beartooth: What was the other one?
Anton: Aardschok
Beartooth: Let’s go for that one.
Anton: Yeah, that’s correct. Haha… First point for you!

2. Which Dutch symphonic metal band is founded by Mark Jansen and got their name from Kamelot’s sixth album, released in 2003?
Beartooth: Let’s go for the three options again. Haha…
Anton: Haha…. No guessing for you? I have Epica, Autumn or Nemesea.
Beartooth: Uh………… Nemesea?
Anton: Almost! It was Epica. In which metal are interested?
Beartooth: Well, all kinds of metal, but we just don’t know that much about it. Haha…

3. In 1990 Iron Maiden covered the song ‘Kill Me Ce Soir’. From which famous Dutch rock band is this song originally.
Beartooth: Well, we take the three options again.
Anton: Again? Well, I’ve got Focus, Golden Earring or Brianbox. You know one of them?
Beartooth: Really no idea… We take a wild guess, Brainbox.
Anton: No, it was the Golden Earring.
Beartooth: Never heard of them.
Anton: Well, they also had a few hits in America with ‘Radar Lover’ and ‘When The Lady Smiles’ in the 80s.
Beartooth: Nice to know, but still no idea.
Anton: Haha… Next question! Still 1 point.

4. What have the Dutch death metal bands Asphyx, Pestilence and Hail of Bullets in common?
Beartooth: Three options!
Anton: Haha… It’s to diffult for you?
Beartooth: Yep! Haha…
Anton: They have the same drummer, same vocalist or the same guitar player.
Beartooth: Drummer!
Anton: No.
Beartooth: Goddamn!
Anton: It was the same vocalist. Martin van Drunen. I think you have to listen more to Dutch metal music.
Beartooth: Haha… Yeah apparently!

5. In 2014 musician and composer Arjen Lucassen worked together with the female singer Anneke van Giersbergen on a musical metal project. What was the name of this Dutch project?
Beartooth: Let’s continue with the three options, because we have no idea! Haha…
Anton: The Gentle Storm, Star One or Stream Of Passion.
Beartooth: Is it the first one?
Anton: Yes, it’s The Gentle Storm
Beartooth: Yeah!!!
Anton: The second point for you!

6. Which Dutch DJ, composer and musician worked together with Sepultura, Fear Factory and Dog Eat Dog?
Beartooth: The three options again please!
Anton: Hardwell, Rude Boy or Junkie XL.
Beartooth: Hardwell maybe?
Anton: No, it was Junkie XL. At least we are going fast! Still 2 points for you.

8. Which Dutch punk band played over 1500 shows and still holds the record of best sold Dutch punk album?
Beartooth: Options?
Anton: I have De Heideroosjes, The Ex or The Apers.
Beartooth: We go for A, the first one.
Anton: Yes that’s correct!
Beartooth: Yeah. You do the guessing from now one!
Anton: The band stopped 2 years ago and played over 1500 shows. How many did you play?
Beartooth: No idea, but for sure not that many.
Anton: Haha… Wel you have some time left. 6 points for you!

10. Which Dutch hardrock band scored a worldwide hit in 1982 with the song ‘Burning Heart’?
Beartooth: Give us the 3 options again.
Anton: It’s Jackal, Sleeze Beez or Vandenberg.
Beartooth: Sleeze Beez sounds cool.
Anton: You know Adrian Vandenberg? The guitar player.
Beartooth: I was born in 1992. And I was born in 1990. This is before our time! Hahaha…
Anton: Haha… But what’s tour final answer?
Beartooth: The last one. Vanden….
Anton: Yes! One point! Adrian Vandenberg also played with Whitesnak for a long time.
Beartooth: Ah, that one we know!
Anton: Let’s see, 7 point for you guys. Not the best score…
Beartooth: Is it the worst score of the day?
Anton: To be honest, yes. This is the worst score…
Beartooth: Haha… But isn’t it just like golf? The lowest score wins right? Haha…
Anton: Haha… Yeah, you are far under par.
Beartooth: But in that case we learned the most!
Anton: That’s true. So listen to the bands I mentioned! Thanks for your time!

Beartooth: 7 points. Check all the other bands that played the Dutch Heavy Music Quiz 2016.