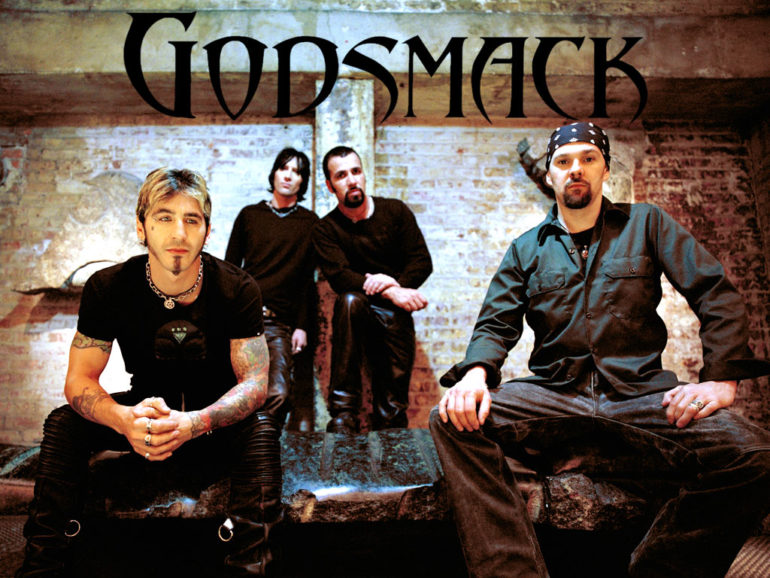 The second band that played the ‘Dutch Heavy Music Quiz‘ at Graspop 2015, was Godsmack. On Friday Anton was sitting down with Shannon Larkin (drums) and Robbie Merrill (bass) to test their knowledge about the Dutch heavy music scene. Do they know more then Cavalara Conspiracy, Obituary or Coal Chamber? Let’s find out.

1. Which hardrock guitar player was born in The Netherlands and moved to the USA in 1962 when he was 9 years old?
Shannon: Yngwie Malmsteen?
Anton: Is that your final answer? Because I have three options for you.
Shannon: Ah, OK. Well then the options.
Anton: Rhandy Roads, Eddie van Halen or Slash.
Robbie: Eddie van Halen.
Shannon: Yeah, that’s Eddie van Halen. I should have known this one. But 1 point!
Anton: Yes, 1 point for you.

3. In which famous American hardrock band was Dutch guitar player Adrian Vandenberg playing in the 80’s and 90’s?
Robbie: I know it. David Coverdales band. What’s the name of this band.
Shannon: Whitesnake.
Robbie: Yeah! Whitesnake!
Anton: Perfect! After Whitesnake he started his own band Vandenberg, with the hit Burning Heart.
Robbie: Yeah, I remember that. This was a trick question. Haha…
Anton: Alright. 3 points for you. 5 point in total!

4. Which Dutch metal festival was in 1995 the largest metal festival in the world?
Shannon: I was in Ugly Kid Joe back then. I might have played that festival. But I can’t remember the names of all those festivals. Haha… Alright, give us the options.
Anton: Waldrock, Dynamo Open Air or Graspop.
Shannon: The only one I heard of is Dynamo, so I’m going for that.
Anton: That’s correct! 6 points. Next one.

5. Which Dutch hardcore band toured around the world with Six Feet Under, Soulfly, Sick Of It All, Madball and Hatebreed?
Shannon: Dutch hardcore. Wauw. I have to go with the options.
Anton: No Turning Back, Backfire or Born From Pain
Shannon: Shit. I never heard of any of those bands.
Robbie: We just have to guess. A. No Turning Back.
Anton: No, it’s Born From Pain.

6. Who was the original female lead singer from the legendary Dutch gothic metal band The Gathering?
Shannon: O man, I heard of the band. Just give us the options and we guess. Haha…
Anton: Anneke van Giersbergen, Simone Simons or Sharon Den Adel. All typical Dutch names. Haha…
Robbie: Haha. We go for A.
Anton: That’s correct! 7 points.
Robbie/Shannon: Yeaaahhh! Haha…

7. Which Dutch music project had Bruce Dickinson, James Labrie and Devin Townsend as guest vocals?
Anton: It was actually from Arjen Lucacassen. If you know who he is. Haha…
Shannon: Haha… No, so we need the options.
Anton: Star one, Ayreon or Stream Of Passion.
Robbie: This guy is killing us. Haha…
Anton: No, your competition is killing you. Haha…
Shannon: Let me have the options again.
Anton: Star one, Ayreon or Stream Of Passion.
Robbie: I should say Star One.
Shannon: OK. A. Star One.
Anton: No.
Shannon: It’s C, isn’t it?
Anton: No, it’s B. Haha…
Shannon: Haha… OK, let’s go. What’s next.

8. Which large metal record label was founded in The Netherlands in 1980?
Shannon: That must be Roadrunner Records.
Anton: Yeah, that’s perfect! 10 points for you!

9. Which Dutch female singer is since 2013 the new lead singer for Nightwish?
Anton: You know Nightwish?
Shannon: Nightwitch?
Anton: No, Nightwish.
Shannon Yeah, I heard of them. Haha…
Anton: Well, let me give you the options. Maria Brink, Floor Jansen or Caroline Westendorp.
Shannon: Give me A. That’s the only one I heard of.
Anton: No, it was B. Floor Jansen. On to the last question.

10. Which death metal band from The Netherlands toured with Death through the USA in 1993?
Shannon: With Death? Wauw, so that has to be heavy as hell. Haha…
Anton: Yeah, the biggest death metal band ever from the Netherlands.
Jack: I want those 3 points, but I don’t know the answer. So we need the options.
Anton: Textures, Legion Of The Damned or Gorefest.
Shannon: It would be I guess C.
Anton: Yeah, it’s Gorefest. Igor Cavalera yesterday said Pestilence. You know that one?
Shannon:Yeah, I know that one, but they are not from The Netherlands, are they?
Anton: Yeah, they are. But no problem. You got 11 points, so for now you have the second place after Cavalera Conspiracy.
Robbie/Shannon: Aaaahhhh…
Shannon: But Igor is European!
Anton: No, he’s Brazilian. But he lives in London now. Haha… But you did a good job.
Shannon: Yeah, this was awesome man.
Anton: Just one picture for the evidence and then we are finished. Haha… Thank you very much!

Godsmack: 11 points. Check all the other bands that played the ‘Dutch Heavy Music Quiz 2015‘.