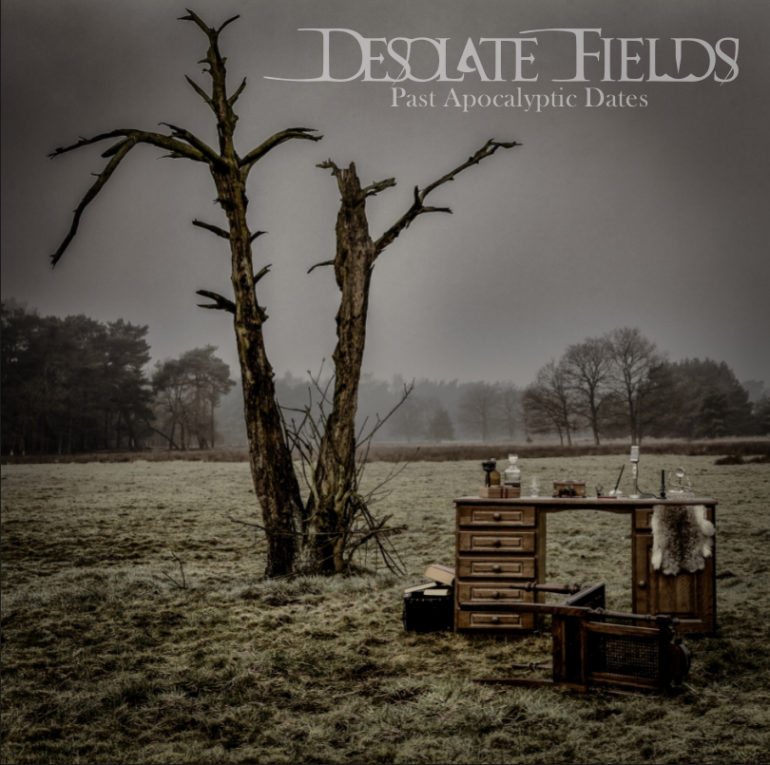 It was at Occultfest 2015 when I was first struck by the performance of the Dutch melodic black metal band Desolate Fields, as opening act of that festival. After that, I ran into this band quite a few times and every time they impressed me. Even as opening act! I was told that the reason this band played mostly as opening act, was the fact that they hadn’t released a CD yet. Well, there is one now called ‘Past Apocalyptic Dates’ which will be released om October 1, 2016. So I expect this band will climb the bill pretty soon!

The first track is called ‘Ramblings of a Stone Man’ and starts of very atmospheric with strings/synthesizer. After a quite fast break, the melodic influences kick in and there are some beautiful parts with a fast high pitched guitar. The next song ‘Stained Papers’ starts of very melodic too and I kinda like that. The combination of clean singing and grunting is very enjoyable. Track three ‘Enviro’ has a longer, slow intro and up unto three-quarters of the song it feels a bit sluggish, which makes it an interesting listening session.

The fourth track is named ‘Vultures’ and starts of quite aggressively. It is a pretty straightforward death metal song, but when it starts to get ‘plain’, there is a surprising change in tempo and atmosphere. With 2:26 the song ‘A Visible Mass of Vapour’ is the shortest track on the album. The build-up is quite sublime! Starting with ambient noises which get louder and gain in definition, they grow out to pure atmospheric sounds, which seem like an advertisement to the next track on this album: ‘Hollow Earth’.

I must admit when I got this album, the first track I played was track 6 ‘Hollow Earth’. I heard this track on a few occasions live and was pretty impressed by it. To hear it now in a studio version, makes me feel impressed again. The ‘live’ feeling is completely there and the layering and complexity reminds me a bit of bands like Tribulation and Textures. The slow double bass drum, the dark voice and a perfect amount of twists and turns of direction and tempo… This is a song which unveils new discoveries with every time you listen to it.

The penultimate song of this album is it’s title track ‘Past Apocalyptic Dates’. On this song the soft voice of Jochem is the only critical comment. The build-up of this song is great again as is the variation within this song. ‘Past Apocalyptic Dates’ is maybe the most traditional death metal track on this album, but it has a twist too (of course). The semi-spoken part is the start of a more melodic part followed by a more brutal part… and waving back and forth between those two. With ‘Blister’ the album comes to an end. ‘Blister’ is in harmony with ‘Past Apocalyptic Dates’ and is a kinda slow death metal track, which makes it quite intense. It is quite long too; with 7:28, only ‘Enviro’ and ‘Hollow Earth’ are longer. The song has the interesting composition that is characteristic for this album. The album does not end with a fade out, but it extinguishes in a rather interesting way.

Conclusion
What a great album this has become! Apart from the volume of the vocals in some songs (which could be a bit louder), the quality of this first (!) album of Desolate Fields is extremely good! These guys really worked hard to compose a musically coherent album and in the mean time they didn’t lose themselves in technicalities, but stayed close to their live sound. That’s an achievement in my book! There is a great variation in songs on this album and even the songs themselves consists of lots of changes and variations. The build-up of almost every song is quite complex and much cared for.