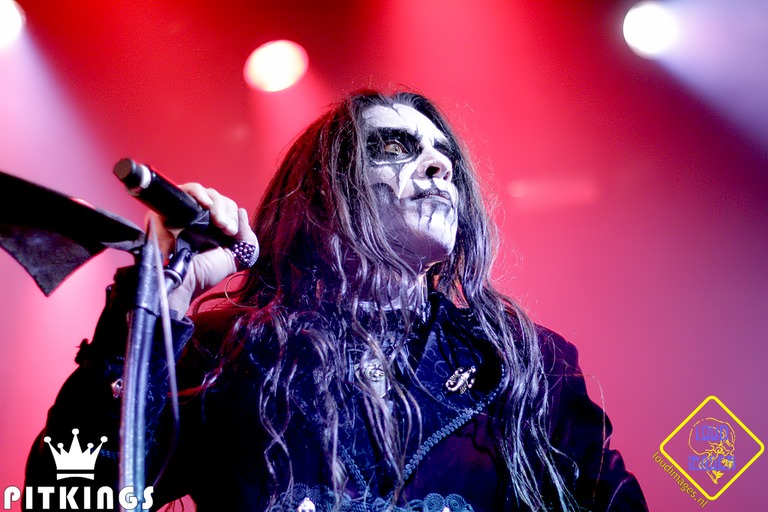 January 16, 2016 | Doornroosje, Nijmegen – Around Christmas there was some turmoil about a gig of the Dutch horror metal band Carach Angren. A religious political party wanted to prohibit their gig on Christmas eve, because of the possible blemish of Christmas. Needles to say, that the Dutch freedom of speech survived without a scratch and Carach Angren played their gig on Christmas eve. All the press this turmoil got, was enough to almost sell the venue out!

In Nijmegen, the gig of Carach Angren with Nightland and Fleshgod Apocalypse took place on a Monday evening 7.30 PM(!) and right from the start it was busy, because it was a sold out show. Of course the Italian bands were good enough to draw a lot of people, but there were quite a few spectators who were very curious about Carach Angren!

Nightland (I)
To have Nightland as an opening act, it’s clear that this evening is going to be a top notch metal evening. The Italian gents of Nightland have got their setup done right. The sound is great and front man Ludovico is unleashed right from the very first song. Although the venue is very busy already, there is little movement except the bobbing heads in the first few rows. It’s a pity, because Nightland is putting in some real effort. After a few songs the crowd is loosened up (and had some more beers) and there is more movement; more heads are bobbing and quite some hair is flying. But alas the set of Nightland is over way to soon. After 30 minutes they have to call it quits and there is quite some cheering, but the audience is quite tame when Nighland walks off the stage. This was a pretty neat set, but I guess it was still a bit early and maybe even some surprise, that this set was really that short. Carach Angren (NL)
After a swift change over and some time for a beer, the lights in the venue are dimmed and it is time for Carach Angren to climb the stage. Before the band members walk on stage, there are a few props which are very noticeable. The mic stand of Seregor is made of a scythe and the synthesizer of Ardek is lying in a heap on the floor with a skull on top of it.
The synthesizer rises by itself and it represents a skeleton shrouded in black cloth. When the keyboard is hardly ever horizontal as the installation moves and turns so Ardek has to walk around his keyboard stand which turns his keyboard in almost all angles. I think this is a great gimmick, because at previous gigs Ardek was most of the time behind his synthesizer and now he’s more visible for the audience. Especially in the beginning is this a plus, when Ardek wears a great mask with an enormous smile. Right from the first minute, Seregor is franticly “mowing” and swinging around with his scythe as he lives his lyrics to the letter. This is one of the things that makes Carach Angren a great band to watch live!

Carach Angren is known for their interaction with the audience and this night is no exception. Seregor hangs around the edge of the stage for most of the time and is regularly bending forward to be close to the front rows where the hardcore fans are: the ones that know all lyrics by heart. Musically it al sounds fantastic. Some songs are even faster than on the record and still played almost to perfection. At some point there is even a wall of death followed by a serious mosh pit in the not very huge venue of Doornroosje is that an achievement. When I take a look back in to the venue, I see it is packed. Fleshgod Apocalypse (I)
Still spinning of the great performance of Carach Angren, it is time for Fleshgod Apocalypse.
The curtains of the stage are closed, which stokes up the anticipation of the crowd. Some CO2 blasters are tested with a lot of noise and than the curtains open up. The stage is done in a baroque styling including the mic stands. The female opera singer traditionally walks on stage first with a staff and has a great sense of drama. This too can be said of the rest of the band! Their stage performance is fantastic, there is lots of expressions and movement to see. Singer Tommaso has quite some skirmishes with the opera singer on stage, when she is of her pedestal and those are fun to watch. The effort put in the show is grand and is totally convincing. Musically it all sounds well, and Tommaso even convinces the crowd to a wall of death and a circle pit, but… there is a but…

Something is missing in the set of Fleshgod Apocalypse. It isn’t the effort or craftsmanship… that’s all there. But there is something different than on the albums… after some elaboration I guess it must have been the computer with the orchestra and other instruments which might have been to soft or not quite right in the mix. I can’t say it wasn’t there, but on the albums it’s more omnipresent and this evening it was just… different. But what am I niggling about… the venue of Doornroosje was still packed when the encores started and it was still a hell of a performance of Fleshgod Apocalypse.