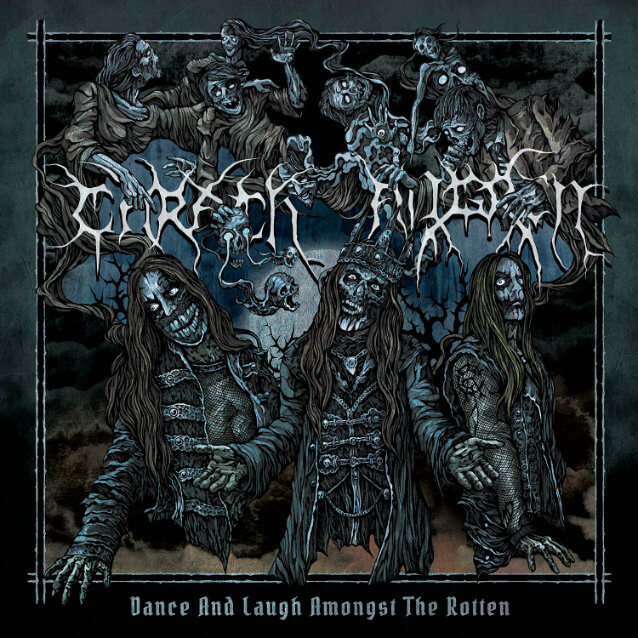 The Dutch masters of horror Carach Angren are back with their fifth full length album called ‘Dance And Laugh Amongst The Rotten’, which will be released next week on June 16th, 2017. The band is going fast and they also have been nominated in the “newcomer” category of the prestigious ‘German Metal Hammer Awards’ for the 2017 edition, which will take place at the Kesselhaus in Berlin on September 15th, 2017. I have no idea why they are nominated for the ‘newcomer’ category, but I’m sure the guys feel very comfortable about it!

With ‘Dance And Laugh Amongst The Rotten’, Carach Angren is telling a story about a girl playing a little too long with her Ouija board. The start of this album can just be called briljant! A two-minute intro of orchestrations is taking you away from the ‘real’ world into the land of horror and fairy tales. They prepare you slowly for what’s coming next and this is your only opportunity to grab a beer and popcorn, so you can sit and relaxed. It’s like the Pirates of the Caribbean or the Lord Of The Rings are ready to rumble.

After the intro the first song ‘Charles Francis Coghlan’ is kicking in. Beautiful, and at the same time complex, music is filling my room, which I would like to describe as a mix of black metal, death metal and symphonic metal. Especially symphonic metal, because of the extraordinary use of piano, choirs and orchestration. The music is quite heavy, but at the same time really accessible and acceptable. The symphonic elements, catchy chorus, tempo changes, pumping riffs and mainly a great bridge and solo in every song are the main ingredients of the album.

But what about the horror metal thing? Well, based on this album I would rather describe it as symphonic black metal which takes you back to the mid ages, when people are hang on the gallows in public. Especially the song ‘Song For The Dead’ symbolises it very well. Other songs remind me of subjects like fairy tales and pirate metal. Another notable song is ‘In De Naam Van De Duivel’ where the lyrics are in English except the chorus, which is in Dutch. Especially the start of the song is quite different than the previous ones. More heavy and less symphonic, but during a long and spectacular bridge there’s again room for melodies and orchestration.

Another song I would like to mention is ‘Three Times Thunder Strikes’. It’s fast, heavy and packed with blast beats. But then… A piano, orchestration, choirs and many more. It’s start of the end of an insane album. What a trip! I’ve been in fairy tales, pirate movies, a horror scene and even in the land of Aladin and The Hobbits. Carach Angren created a true masterpiece and brought their black metal to a next level with “Dance And Laugh Amongst The Rotten”. This album is not only interesting for black metal fans, but also for diehard symphonic metal fans. You won’t be disappointed!