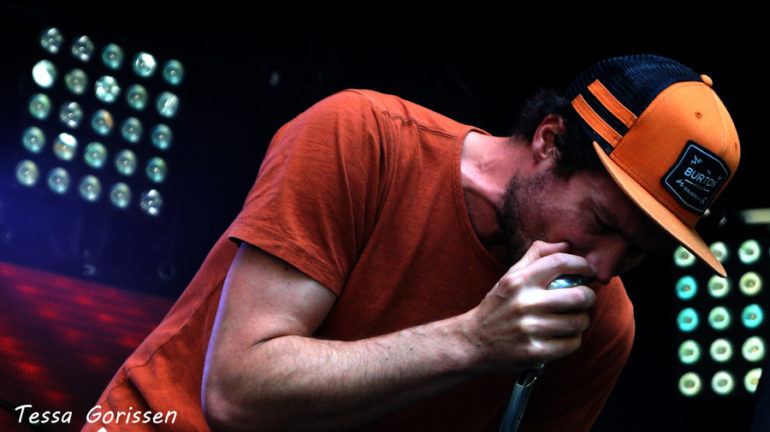 September 19-20, 2015 | Valkenberg, Breda – Breda Barst is almost the last festival of the summer. Therefor we went to the place where it all happens: Valkenberg Park in Breda. With bands like Death Alley, Tarantino, 2 Years To Apocalypse, The Royal and For I Am King, it sure would be a great party. Tessa was there for two days to take pictures and to write this review. Unfortunately no pictures of the first day, because her camera crashed.

Paramatman
Paramatman has the honor to open the festival. They call themselves a ‘powerduo’. Two boys on stage, just a guitar and drums. But still they make an amazing show. You don’t even miss other instruments, because the band plays so well. Too bad not much people came to see them play, but the band is enjoying their moment on the Amstel Stage. But after half an hour the show is done. A lot of people already walked to Spaanse Kraag to see the next band play, but the few people that are left are cheering. A good opener for an amazing weekend.

TANK86
The next band we see is TANK86, an instrumental metal band from Breda. This band plays a lot in the neighborhood and is called the ‘house band’ of Breda Barst. They brought a lot of fans to the festival, because there are a lot of people in front of the stage. From the beginning the band is very energetic and the guys make a show out of it. Interaction is just screaming to the public, because there are no microphones to be found. That doesn’t bother the crowd: everyone is loving it. The guys prove that they can play. It sounds really good. Let’s make the rest of the weekend just as good as this show and everyone will be happy.

2 Years To Apocalypse
A boy and a girl who do the lead vocals and an energetic band behind them. 2 Years To Apocalypse is ready to take over the Spaanse Kraag on the first day of Breda Barst. Even though the visitors are pretty calm, the band is jumping up and down. A nice thing is the grunt of singer Nam. She grunts like she’s a man, which makes the voice of Ilah sound like he’s more a girl. A disadvantage: when Nam starts singing instead of grunting it’s not that clear all the time. But overall a good performance, which will be in the minds of the visitors forever.

The Royal
Almost a year ago we saw The Royal when they still needed to get their reputation to the level they are now. With For I Am King as support next to the stage in the Spaanse Kraag, the Dutch hardcore band starts their performance with a lot of people in the tent. There are even people next to the tent, because they’re not fitting in anymore. The first few rows are moshing, but still it’s very calm. However, you can’t blame the band. They’re playing their asses off on the stage to make it a memorable show. And they do: they’re realizing our expectations!

For I Am King
Let’s see what the Dutch female fronted metal/hardcore band For I Am King has to offer. For I Am King plays in the early evening in de Spaanse Kraag. Way too many people came to see this band perform. From the first notes, the band is running on the stage and can’t stand still for a moment. Even the crowd is moshing around, in contrast to the earlier bands. For I Am King is popular, for sure. A very good show for a band who became big in a very short time.

Herder
The last band we see the first day of Breda Barst is Herder. This Dutch band has a lot of attention from people around the Spaanse Kraag. A lot came specially for this band. And deserved. The band just starts playing when the first moshpit starts. This moshpit is the hardest we’ve seen today. Everyone is having fun, even a small kid on the first row. He is smiling the whole time and the band smiles back. That the guys love to be on stage you can notice on everything with this show. A singer who’s not standing still on stage, a band that plays his ass off. This is definitely one of the shows that is a highlight on the festival.

Tunnelvisie
On the second day, the Dutch Tunnelvisie opens the Amstel Stage. This band combines metal and rap perfectly. A lot of people came to see this band perform and a lot of them even sing along with all the songs. At first the band plays their songs a bit tame, but when they’ve got used to the stage and the crowd they give their all. Almost at the end of the show the guys even have a special surprise for the visitors: Bas of Bazzookas climbs the stage to play a few songs with the band. And when that happens the crowd goes wild. An amazing opening of the second day. The Greatest Handshake
When this band climbs the stage you know strange things happen. From the first notes The Great Handshake does weird, dances weird and the singer is a bit out of tune. But everyone is loving the performance of the guys of Belgium. And when one of the guys ask the crowd if they give kisses, everyone is laughing. The atmosphere is great, the performance: well, you’ll get used to it. But even though it wasn’t that good music the show was good. The Deaf
We saw this band earlier this year: The Deaf. This time they’re playing the Amstel Stage of Breda Barst. A lot of people came to see this band and half an hour before the show it’s already full. Everyone wants to stand front-row for them. When the show starts the atmosphere is great right away. Even when people are throwing beer, the band just makes fun about it and plays along. The show is just as energetic as always: they’re not standing still, doing everything to please the crowd. Navarone
A band who played a lot in the neighborhood is Navarone. In the early evening they’re playing the Amstel Stage. Right before the show a lot of people, most of them 40+, have assembled around the stage. This is definitely a band the people were waiting for. The band plays amazing and the vocals are perfectly clear. Not much bands can say that about themselves. They even know how to make it a great show, without a lot of mishmash. Just a performance of an older band, having fun on the stage and want to give the crowd what they really came for: music. Death Alley
The last band of the festival is Death Alley. They’re playing at the Spaanse Kraag. Not much people came to see this band. And the people who are there are too drunk to act normal. On one point they even want to throw with the barriers. But the band’s just playing along like nothing is happening. It’s typical 80s rock and even the guys look like it: bandanas, long hair and a mustache can’t miss out. Even though it’s not the best band of the festival they’re making the best of it. Overall: It was an amazing festival this weekend. We saw a lot of good bands and performances!