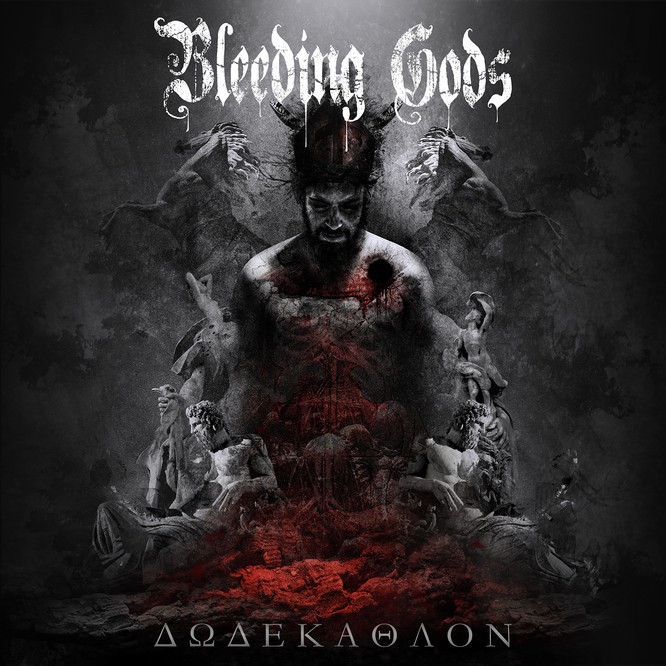 When the mighty record label Nuclear Blast asks a metal band to sign a contract, it’s for sure you are doing some damn good things. It happened recently to the Dutch epic death/black metal band Bleeding Gods. They are around since 2012 and released one album called ‘Shepherd of Souls’ in 2015. Their upcoming album »Dodekathlon« is a concept album and is scheduled to be released on January 12th, 2018 by Nuclear Blast.

Wow! Just wow! I totally understand why Nuclear Blast contracted this band. Strong and powerful death metal with a nice modern metal twist and partly some black and symphonic metal influences hits my ears. The vocals are raw, loud and brutal, but understandable and easy to listen to. Good job! The sound and production of »Dodekathlon« is fat, but certainly not overproduced. All the instruments and the vocals are well balanced and are served as a delicious blend. Most of the songs are fast and packed with heavy elements. The tracks ‘Hera’s Orchard’ and ‘Hound of Hell’ are some of the slower songs, but for me two of the highlights of the album. It’s melodic, catchy and filled with some great solos.

The faster and heavy songs ‘Beloved by Artemis’, ‘Birds Of Hate’ and ‘Bloodguilt’ are kicking in aggressive. It continues with stomping riffs and rhythms alternated by melodic symphonic keys, catchy guitar solos and blast beats. Bleeding Gods recorded an awesome album. It’s fresh and renewing in a certain way, because of the variety of different musical instruments and styles. They take you on a metal journey and won’t let you go till the album is finished. Compliments!