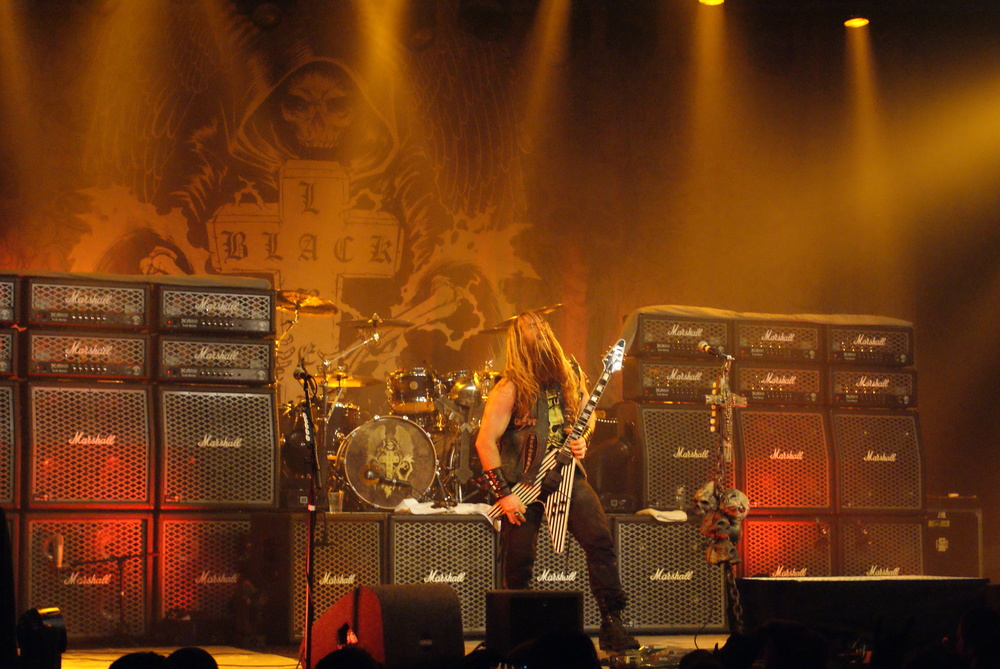 February 21, 2015 | Melkweg, Amsterdam – The American (non-Dutch…) heavy metal band “Black Label Society” (with frontman Zakk Wylde) played a sold out show in the Melkweg, Amsterdam. The gig is part of their latest album “Catacombs of the Black Vatican”.

The place is fully packed and the two support acts (Crobot, Black Tusk) heated up the place very well. A large backdrop with the Black Label Society logo on it, is hanging in front of the stage and falls down after the intro “Whole Lotta Sabbath” is played. They start to play with one of the classic songs “The Beginning… At Last” and the sound is as usually very heavy and solid, with the strong riffs and the typical guitar playing (solo-ing) of Zakk Wylde. The audience is a mix from youngsters with Slipknot t-shirts and the older metal heads with leader jackets filled with patches from the eigthies. The crowd is enjoying the setlist so far and there’s a wild pit going on in the front. The pit is getting quiet and people are taking their moment of rest when the song ‘Heart of Darkness’ is played from the latest album. It seems people are not here for the latest songs, but for the good oldies. And the get well served! All the classic songs like ‘Concrete Jungle’, ‘Stillborn’ and ‘Suicide Messiah’ are coming by. Zakk’s one man show
Yes really, the band is called ‘Black Label Society’. But it wouldn’t be strange when it was called ‘Zakk Wyldes Society’. It’s a one man show from the ex-Ozzy Osbourne guitar player. And sometimes that’s a little bit annoying to see that the other band members are there just standing there ‘doing their thing’. At the other hand it’s very impressive to see how Zakk Wylde can make a show on his own. His attitude, his massive body and his amazing guitar playing is everything the crowd came for. A very solid show from a great artist, uh…band.