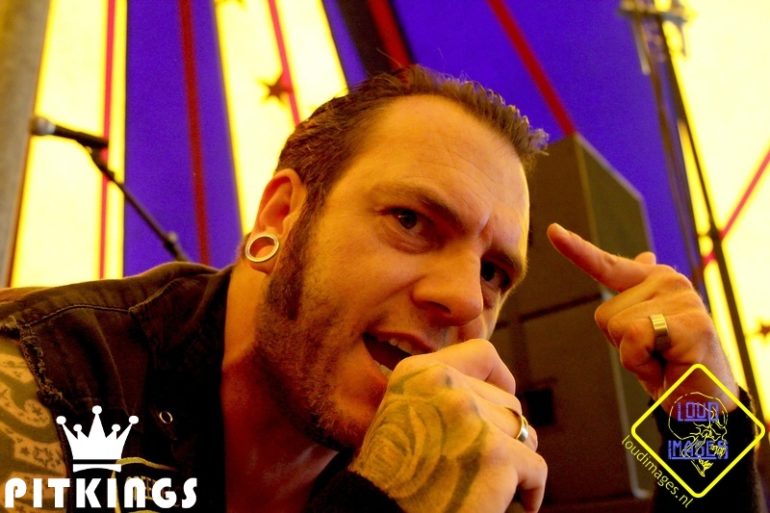 September 19, 2015 | Rotterdam – A nice day for Baroeg Open Air 2015! The first edition of the metal festival Baroeg Open Air took place in 2006 and this year it’s time for number eight. There were a lot of bands playing on the three stage, like: Gingerpig, Raketkanon, Rats on Rafts, Rykers, Vader, Batmobile, Venom Inc., Facelifter, Skullsuit, Kid Harlequin and many more. Marc (review & pictures) and Maurice (pictures) were there on behalf of PitKings.

Facelifter
I saw these guys before on Dynamo Open Air and I was curious if they could put down another good gig. Luckily the strange sound effect on the mic, which they experienced at Dynamo, was no issuet his time. The set was clean and well varied and although there was not a big crowd, it didn’t influence their performance. That was great, again! Singer Mike is Dutch grunt-champion, so he nails that with no effort. Facelifter is brought together by the Metal Factory (a Dutch school for becoming a heavy metal artist) and is quite successful. It’s great to see that talents get their deserved coaching to take that extra step. If they perform near you, you really should check ‘m out! Gingerpig
Gingerpig is formed by Boudewijn Bonebakker; former guitarist of the successful Dutch death metal band Gorefest. But Gingerpig is something quite different! Gingerpig plays a bluesy kind of classic (hard-)rock and I am a fan! Boudwijn is a very talented guitar player and shows his skills in nice solo’s, which are a joy for eyes and ears. The music fitted very well in the complete setting of Baroeg Open Air: nice bluesy rock in a park, with the sun high in the sky, and a cold beer in your hand. Just perfect! Skullsuit
Twice in a row might look a bit much, but with Skullsuit it isn’t. At the Occultfest they put on a great show on a small stage, in bad weather, for a handful of people. At Baroeg they were the replacement for Rise a Thousand, because their singer got ill. I think it was a good choice to ask Skullsuit!
On a bigger stage, with more people in front of them, Skullsuit is rocking the crowd without problems. The raw, but clean voice of Roy fits their style of music very well in my opinion. The music is loud and heavy and it’s obvious all band members have a blast being on the stage. Roy is typically all over the place: walking around, standing or squatting down on the edge of the stage, but always in contact with his audience. Skullsuit played a great set. I am looking forward to the next time! Raketkanon (BE)
This band from Belgium had some technical problems before the start of their show and singer Pieter-Paul Devos got quite annoyed and acted very angry at some stagehands. Not a great start of a gig. When they started, the photographers had to get out of the way and it took to long according to Pieter-Paul, so that didn’t made his mood any better.
Raketkanon plays noiserock and the band relies heavily on audio-altering devices to create their unique sound. For the untrained ear (like mine), it’s chaotic and strange, but the crowd loved it! Right at the first song, Pieter-Paul is crowd surfing and singing and that’s what got the crowd going! Hopefully Pieter-Paul can look back at a great gig, to sooth his mood. The crowd did, as far as I can judge. Kid Harlequin
The first thing you’ll notice when Kid Harlequin enters the stage is the curly head of singer/guitar player Julien. But when they start to play most of the attention goes out to co-guitarplayer Arianne van der Steege. Not only for her looks, but above all her energetic behavior! She jumps and skips around as if her dear life depended on it! This is what makes a rock show a rock show! The steady basslines come from Bronco Kuijt and he looks almost shy compared to Arianne, although he is moving around too. The second lady in the band plays the drums. On the site of the band these 2 ladies are referred to as viscous ladies and I totally agree with that! Sharon Harman (drums) keeps the rhythm tight and fast and Arianne, well… visit a gig of Kid Harelquin and find out yourself! Their industrial alternative rock sound gets great reviews, so check them out on Spotify, iTunes and Deezer and if you have the opportunity to see them live, just do it! Rats on Rafts
This new wave/post-punk band is quite a busy bee, when it comes to touring. They tour Belgium Britain, Germany, Switzerland, Luxembourg and France. New Wave never died! When listing to this band, you can’t help to hear some influences of The Cure and that’s not bad at all! After seeing Kid Harlequin, Rats on Rafts appears a bit timid, but you have to understand new wave ;-). Rats on Rafts was nice reminiscing! Rykers (DE
When this German hardcore band climbs the stage, it is already pretty busy. The start is energetic an brutal. Rykers has made quite a name for itself since the 90’s in the hardcore scene, which was dominated by American bands. At Baroeg Open Air they make sure that name is lived up to. It looks like the entire band is all over the stage, except the drummer. I personally think he would like to run and jump around too, but that’s just not allowed. Much too soon the 45 minutes of their set is over and I haven’t had enough yet. This one goes on my list to see sometime soon! Vader (PL)
This death metal band form Poland has been around for quite some years now. It was formed in 1983 (!) and never stopped. Although their last album has more thrash influences, their sound is more or less the same in all those years and that’s makes me looking forward to this gig!
At the stage of Baroeg, Vader is merciless and hits the crowd with fast and loud death metal and although they are not the youngest of today, the keep the speed up until the last note drifted away over the Zuiderpark in Rotterdam. When I was younger I listened to Vader with friends, but never saw them live. It was great to see them now and notice that they are as good as they ever were! Age doesn’t count!

Unfortunately I had to leave after Vader, so there is no review of Batmobile and Venom Inc. Of course we have pictures from Maurice from it!

Although the day started out quit rainy, when I arrived in Rotterdam, the dark clouds drifted land inwards en a pale sun came in view, which stay almost all day. A good job Baroeg Open Air! Up to 2016!