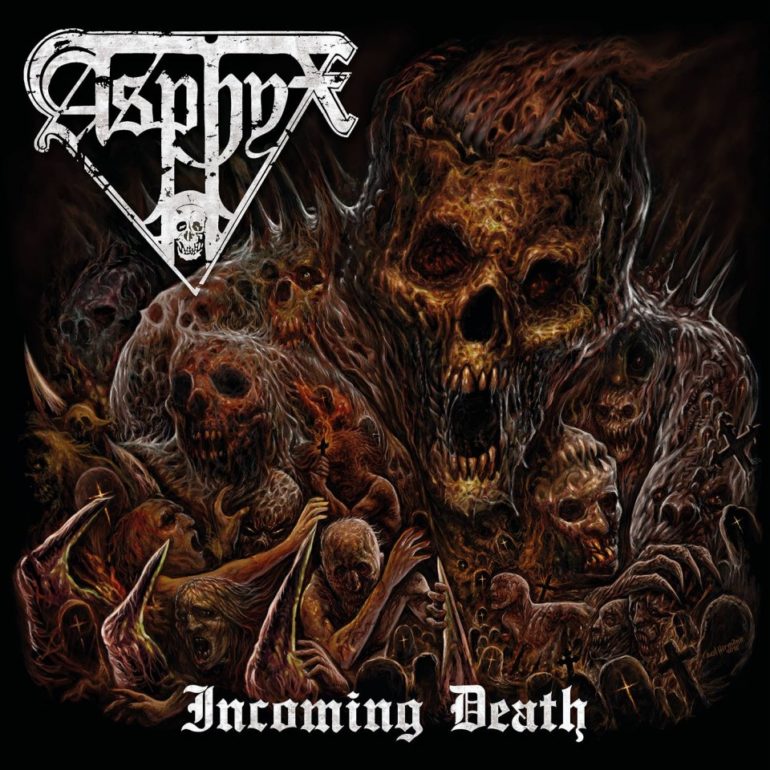 The iconic and legendary Dutch death/doom metal band Asphyx is coming with a new album called ‘Incoming Death’, which will be released on September 30th by Century Media Records. It’s the successor of their in 2012 released album ‘Deathhammer’ and their ninth studio album since their founding in 1987. Since their reunion in 2007 (they quit in 2000) and some line-up changes, Asphyx is still very popular in the Netherlands and abroad. Just take a look at their Facebook-page (over 183.000 likes) and their world wide tour schedule!

Right from the start Asphyx shows us why they are still so damn popular in the world of death metal. This album just got it all! The quality of the music is massive and overwhelms you with the low tuned but very melodic guitars. The sound is like a ten ton hammer smashing through a wall of massive concrete and steel. Slow parts are interspersed with fast parts, all influenced by different styles of metal, like doom, death and melodic metal.

To explain this high variety of this album, I picked a few songs. I start with the second song ‘Division Brandenburg’. A slow song with the low growling of Martin van Drunen (ex-Hail Of Bullets, ex-Pestilence) and slow double bass drums, which reminds me immediately to Obituary. Delicious! With the song ‘The Grand Denial’, Asphyx just wrote a master piece! All the elements and styles of metal styles I just mentioned are combined in this epic song. Melodic guitars, slow parts, some faster parts, just everything.

Where ‘Division Brandenburg’ is a slow song, the seventh song ‘Incoming Death’ is just the opposite. A very, very nice up-tempo Slayer look-a-like thrash song packed with aggression and brutality. The song ‘Forerunners of the Apocalypse’ gives me energy! The drums is pumping you in the right direction and together with the stomping guitar riffs, it gives you enough reason to bang your head! The last song ‘Death: The Only Immortal’ is a beautiful, 8 minute slow melodic death metal song with doom parts in the end. Awesome song to end the album with!

My conclusion is that the strongest point of this album is the variety of different songs and styles in combination with an awesome recording sound. They surprise me constantly and make me listen to this album very carefully, without getting bored. The groove, the growling, the fast aggressive parts and the slow melodic parts are just an excellent blend of Obituary, Slayer and Paradise Lost. At the same time they still sound like Asphyx and that’s just big and unique achievement!

Tracklist
01. Candiru
02. Division Brandenburg
03. Wardroid
04. The Feeder
05. It Came From The Skies
06. The Grand Denial
07. Incoming Death
08. Forerunners of the Apocalypse
09. Subterra Incognita
10. Wildland Fire
11. Death: The Only Immortal