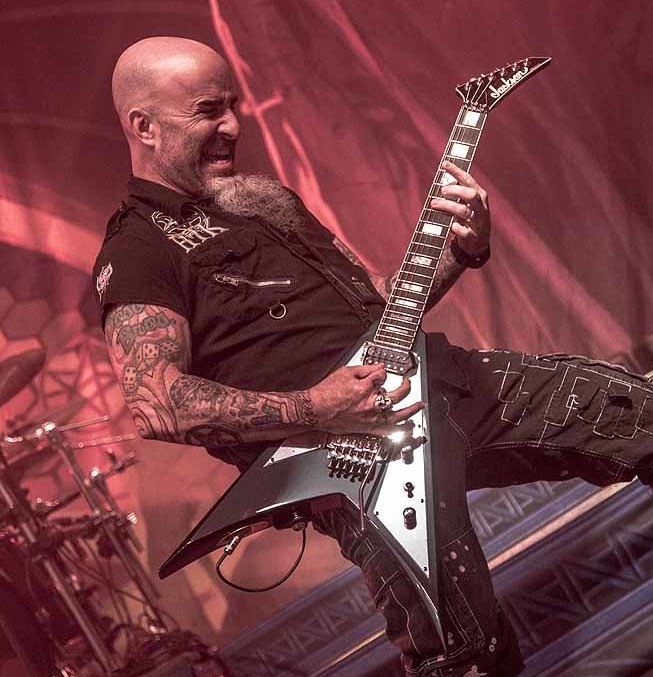 Scott Ian is one of the most consistent men in the metal genre. As the last remaining founding member of Anthrax, he’s holding down one of the most legendary thrash metal bands out there, and as stated when we reviewed a concert last summer, people still get excited when Anthrax comes to town. Metal in general might not quite get the attention it once did, but head to a show for these guys and you’ll be taken back 30 years in the blink of an eye.

Metal fans need to keep figures like this in the spotlight. So for that reason, as well as just in general appreciation of a career well done, we’re doing a quick look at 5 things you might not know about Scott Ian.

1. He’s Raising A Rock Prodigy
This might not be a huge surprise given that, well, he’s Scott Ian. Also, as most fans are aware, he’s married to Pearl Aday – the daughter of the one and only Meat Loaf, and herself a musician. Even so however not everyone knows about the couple’s son Revel Young Ian, who by the sound of things is turning into something of a rock prodigy. Granted we don’t know if he has musical aspirations of his own, but he’s a big AC/DC fan and apparently enjoys Metallica and The Beatles as well. The couple has even revealed that at a young age Revel can tell the difference between Bon Scott and Brian Johnson (and prefers Scott).

2. He’s Written For DC Comics
Many may be aware that Scott Ian has written books, but it’s a little bit lesser known (and just generally more surprising) that he was commissioned to work for DC Comics as well. Oddly enough though, this happened in 2008 and Ian contributed to the first two issues of Lobo: Highway To Hell (which came out between November and December of 2009).

3. He’s A Poker Enthusiast
Ian is actually quite the poker pro, as a sort of hobby/side career. According to a piece covering a few different musicians who like casino games, Ian learned to play on the road with the band and has put his skill to the test on the professional circuit. He was in a high profile charity tournament in 2006, and thereafter competed multiple times in the World Series of Poker. In fact he even hosted an online tournament of sorts through UltimateBet. It’s a surprisingly calm hobby for a shredder, but there you have it.

4. He Has Feelings On Donald Trump
Relax, we aren’t going to get too political here. Ian has stated that he’s neither a Republican nor a Democrat, so we won’t project anything onto him. What’s interesting though is that in commenting on Donald Trump he’s hinted at the personal connection or understanding many in New York City seem to feel toward the surprise 45th president. Ian has basically implied that people in New York know the real Trump, and that many of the Americans who voted for him do not.

5. He’s Embraced Spotify
It’s not the most exciting point about Ian – who all things considered is a very interesting guy – but it’s worth noting because so many people in the various genres of rock have resisted the modernization of music consumption. Ian apparently took his time coming around to Spotify (which is more or less not an option for musicians nowadays), but now says it’s worked out really well for Anthrax. He acknowledges that if you don’t adapt, you don’t survive – which is actually almost a paradoxical thought for a guy who’s heading up a metal band the same way he has since the ‘80s.