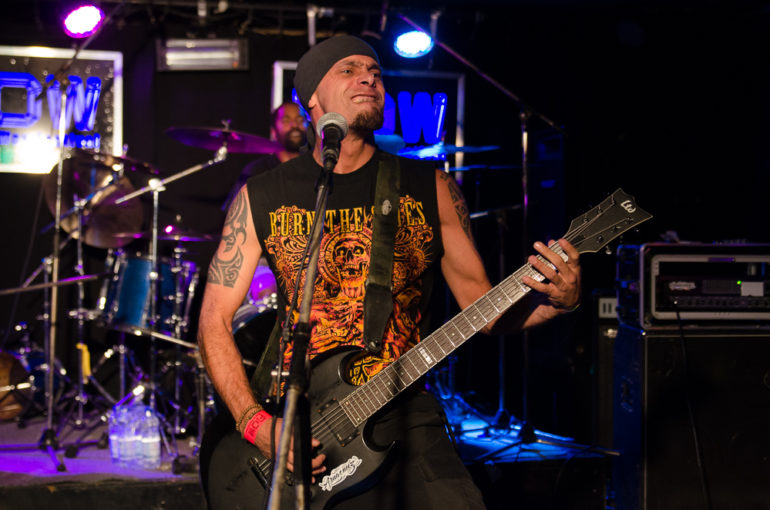 September 26, 2015 | Rotonde, Berkel en Rodenrijs – This year is the sixth edition of the Right Of Way Festival. Having been at almost all editions, I can say I’m gonna enjoy myself with a good mix of different metal styles this day. This year with the Dutch bands Faith Ablaze, Warmaster, Rise Upon Fortunes, Nox Aeterna, Roadkill, Seita, MagnaCult and Kill The Innocent from Luxembourg.

Faith Ablaze
The first band to enter the stage is Faith Ablaze. The venue is not really packed yet and that’s really sad, because they are missing some great thrashcore. A good combination of metalcore and trashmetal, cool melodic riffing, breakdowns, grooves and a vocalist that can change from a screamer into a grunter. I hear a lot of influence from Killswitch Engage in the songs and I enjoy their set. Warmaster
The second band to enter the stage is Warmaster. Well, I can tell you that if you like old school death metal, then Warmaster is the band to see. Think of bands like Benediction, Bolthrower, you get my drift. They played a tight show and delivered what you expect from a band like this. Punchy, heavy mid-tempo Death Metal, a delight to hear that music that brings me back to the golden days of old school death metal. Rise Upon Fortunes
Then it’s time for Rise Upon Fortunes, a metalcore band from Rotterdam. The members have earned their marks in the metalcore world by playing in hardcore/metalcore bands like As Prayers Fail, The Vile Creation and To Heaven Earth Is Hell. I recently saw them playing at The Battle 4 B.O.A, so I knew what I was up for. Like the previous time, they delivered a tight show. Great musicianship, tight riffs and drums and an energetic vocalist who was all over the place. Nox Aeterna
Next up was Nox Aeterna. It feels like I have known Nox Aeterna all my life. I have shared the stage with this band multiple times and have seen them on a lot of different occasions. It was good to see them again, performing songs from their new cd ‘The Desperation Deal’. Nox Aeterna plays melodic death metal. Think of bands like Children Of Bodom and old In Flames.
I really enjoyed their performance tonight. The sound was great and front man Arnold knows how to play a crowd. Together with the female guitar player and partner in crime Debbie, they create a great base for some Scandinavian melodic death metal. Of course completed by a ferocious bass player, a tight drummer and keyboard player. Roadkill
The band with the most history on the bill was definitely Roadkill. They started in 1993 and have been rocking the stages ever since it’s creation. They play heavy metal in the style of Iron Maiden, Judas Priest, etc. It was clearly visible that the band had a lot of fun while playing their show. They smiled all the time on stage. The sound on stage was excellent and the songs were received very well by the audience. It was great to hear some heavy metal being excellently played in between the rest of the harder bands. Kill The Innocent
Kill The Innocent was the next band on the bill. They come from Luxembourg and play a mean combination of metalcore and death metal. I really liked the death metal elements in their metalcore: the songs were heavier and faster than the previous metalcore bands that were on the bill. Powerfull vocals, great guitar-work and a tight rhythm section. The songs were written very well and the performance was powerfull. It was a joy listening to this band. Seita
Seita from Amsterdam is up next. I have heard of these guys before but have never seen them live, so I was looking forward to their gig. And they did not disappoint. They played a great set of thrash metal, mixed with some death metal and some core influences. They are very energetic and vocalist Michael, a charismatic frontman and guitar player, delivers us brutal riffage and great heavy thrash vocals. Backed up by a band that knows their way around their instruments and plays like a well-oiled machine, it was a great show. I think this was my favorite band of the evening, because I really enjoyed the songs and their performance. Conclusion
Unfortunately I did not get to see Magnacult as I had to leave in order to get home before public transportation stopped driving. I hope to see them soon, because I heard some great stories about them as a live act. Right Of Way 2015 was again a great festival to join. Hope to see you next year!