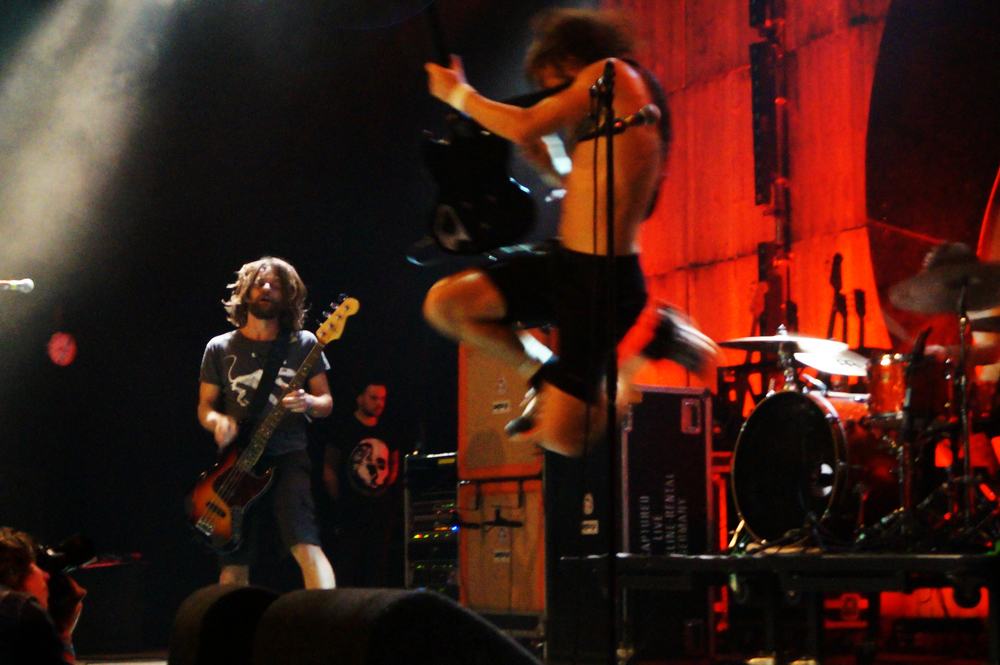 April 3, 2015 | Paaspop 2015, Schijndel – Paaspop is the kick-off for the festival season in Holland. Johan and Tessa were at Paaspop 2015 the whole weekend to write a review about it. On the first day it’s time for Truckfighters, Blues Pills, Fiddlers Green, Kensington and Direct. Read more about day 2 and day 3.

After a week of bad weather it wasn’t quite sure that the organisation of Paaspop would get everything ready on time. They did a decent job put down some plates and some shredded wood which seemed to work. The festival appearance was some sort fair big constructions with many lights. When we entered De Molenheide in Schijndel we knew it: Paaspop was ready to start!

Truckfighters
Truckfighters are well on their way, their tours are getting bigger and they are doing good at the festivals the band from Orebro, Sweden made the wooden floor of the Jack Daniel’s Stage tremble with their dirty stoner riffs, it was almost impossible to do nothing at the music everybody was jumping, headbanging, moshing nothing was out of the question. This was one hell of a dirty and sweaty show. They played songs like ‘Desert Cruiser’, ‘Gargarismo’ and ‘ The Chairman’. On ‘Desert Cruiser’ people even sang the chorus along.

Blues Pills
After Truckfighters it was time to relax a bit the stage was set for Blues Pills, also a band from Orebro and there seems to be something in the waters there. Blues Pills are an up- and coming blues-rock/psychedelic rock band fronted by a female singer. The band has some fine songs like ‘High Class Woman’ and ‘Black Smoke’. The amazing voice of Elin was full of strength. The public was very enthusiastic and the Jack Daniel’s tent was full. A capella or with the band, it all sounded amazing. We’re gonna see this band on the mainstage one day, because that’s what they deserve. After round 45 minutes it was time for the band to leave the stage and the crowd wanted more.

Di-rect
The first day of Paaspop started for Pitkings with Di-rect. Since the departure of Tim Akkerman the band made a turn and made new music. With a lot of new fans they kept going. Now they’re kicking off the Apollo stage on this day. The band shined and smiled. This band deserves to be on the mainstage and made all the expectations come true. Lots of light effects, guitar riffs and a clear voice characterized the show.

Kensington
The last band for Pitkings was Kensington. By entering the Apollo tent it was clear that this band is popular. It was very crowdy and hard to go to the front. Even an hour before the show. From the beginning Kensington played with their typical arrogance, that fits them. The new album, Vultures, got a platinum and the band still wants to celebrate that. All their hits came along and the crowd was clapping and singing. The Fansingtons, the fanbase of Kensington, were also there. This made the band smile. Energy, a clear voice, a lot of drums and guitars. Everything was there to end this first day of Paaspop in style.

Fiddler’s Green
The last act was Fiddler’s Green, they are best compared with Dropkick Murphy’s and Flogging Molly only with a more heavy sound. Songs like ‘Victor and his Demons’ ‘The Night Pat Murphy Died’ and ‘P Stands for Paddy’ cause the audience to jump up and down. They closed the night with a festive performance. A great first day with some awesome and interesting performances.

A good first day with a lot of mud, dirt and beer. But everyone enjoyed it. On to the next day!