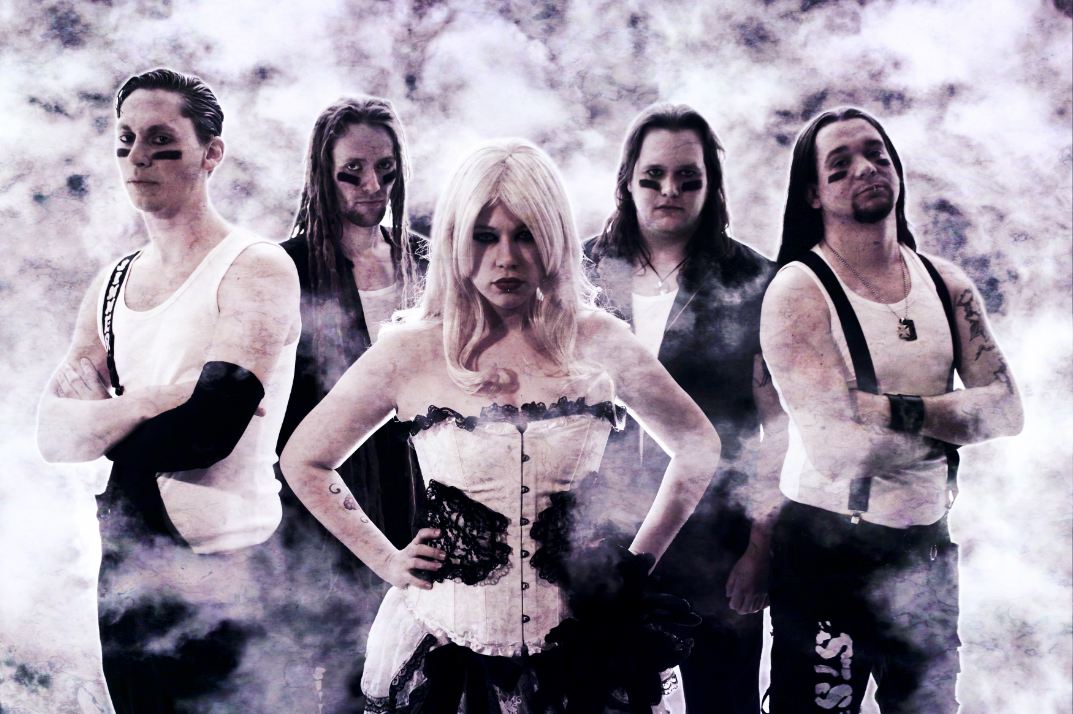 On the November 29, 2015 the Dutch female fronted metal band Sin7sinS will release their 3rd album “Purgatory Princess” during their release show in dB’s Utrecht. PitKings interviewed the band members ‘Lotus’ (vocals) and ‘Gen Morfine’ (guitar) about their new album, tour and inspirations.

How are you doing?
Hello, we are doing very well. At the time we are very busy with the upcoming release. Exciting times for us!

For those who do not know Sin7sinS, can you introduce yourself in short.
Sin7sinS is a Dutch Female fronted metal band founded in 2007. We have played a lot of shows and soon we release our third album, “Purgatory Princess”.

You already go for a while and ‘Purgatory Princess’ is the third album by the band. How long have the recordings and writing of the material last in total?
Gen was from September 2013 to March 2014 busy with writing for this album. We had about 12 songs from which we selected the top 10 and took it over a period of two months, from May / June. After this, the album went to ‘Dan Swano’ who mixed the whole and delivered it to us in September.

Did you feel that the correct path is chosen with the new album and that the attention and fanbase is beginning to grow?
Yes, absolutely. We have already heard a lot of positive feedback. With this album we think we reacht a wider audience, because as a whole it’s more metal but it remains in our roots. On social media and during live performances, we notice that we get more attention and that people are very enthusiastic.

Where does your inspiration for the lyrics and themes of the songs mostly come from?
Really out of everything. A collection of experiences, emotions and thoughts. Everything you create with it and see, can provide inspiration for a song. However, we try to limit ourselves to things we find ourselves the trouble to describe whether we as a band we can find.

What are your musical inspirations?
From classical to death metal … really too many to mention. However, we try to create our own sound and notice that it getting easier. We have already heard several times that the new material is labeled as “typical Sin7sinS songs”. In our opinion this is obviously very positive, because people are going to associate a particular sound to your band.

The gothic genre is going around for quit some years already. Do you feel that it is getting more popular or whether it decreases slightly, according to your experiences.
Well I think the image of “gothic” is changing. We do not longer speak about gothic, but about female fronted metal and we see that a much broader genre is becoming. More diversity of bands and a larger audience. I think the genre will only grow, as front ladies are being accepted by the regular metal audience.

November 29th is the release show in Db’s Utrecht. Is this the start of more planned gigs?
Of course! On our webstie www.sin7sins.com you can find information about all upcoming shows. And I would say to anyone who is interested in Sin7sinS live and our new album, come to our 29th release show!!!

Are there also scheduled performances outside the Netherlands? And festivals for the summer maybe (scoop at PitKings always welcome!)?
There may be some things, but nothing about where I currently can / may talk about. We want to focus on more on overseas in the future in any case.

What is your ambition for 5 years? Tour with the greats or just stay around touring in the Netherlands?
Of course we hope to continue to grow and in our opinion it is not big enough. We hope to gain more recognition and expand our fan base. What the future will bring, we will have to see. Touring with the greats does not sound annoying anyway.

Thank you for this interview. Success with the release show!
Thank you!

More information: www.facebook.com/Sin7sinS or watch their latest videos on PitKings.