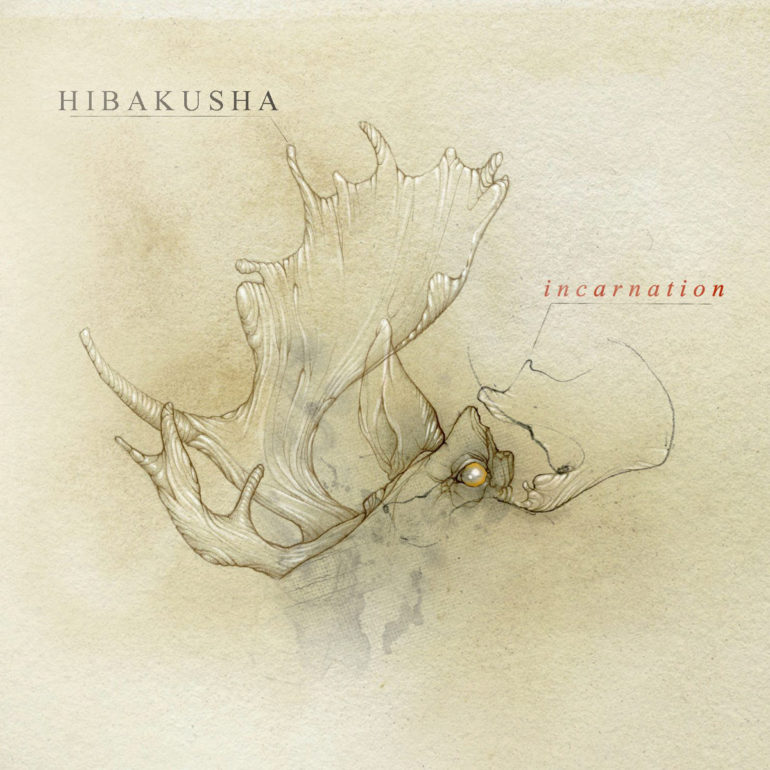 Arising from Haarlem (NL) in 2012, Hibakusha may have a “kush” in their name, but their sound is anything but mellifluous. Initially a quartet, they found a kindred spirit in vocalist Twan Driessen and added him as a fifth member before recording their debut EP, ‘Incarnation’.

An exercise in visceral death throws, Hibakusha’s roaring introduction may not be the most varied of albums, but it certainly articulates Driessen and company’s untoward intentions. Awash in excruciating growls and tortured screams, Incarnation strafes the landscape and harvests it down to mere stubble. Swinging their scythe in a wide arc they clear the way for the unfathomable darkness erupting forth from Cirith Ungol with five closely-knit tracks. Somewhat less than titanic in nature, “Unsinkable” chugs towards the drain and plunges in to the icy depths accompanied by airlessly barfed vocals. What took you so long to arrive at the bottom of our ocean?

Loud and proud, they roll through the gutter in ripped up combat fatigues and wave a bloody banner as they shamble forth like the reanimated corpses of fallen soldiers. Eschewing The Beatles’ languid lover for a beautiful tyrant, the surges of “Julia” flood the senses in a tide of crimson foam. Deep cul-de-sacs of pressurize regret fester and swoon in the hope of forming a diamond out of a carbon-black soul. Issuing an acidic war-cry and a sacred oath to exterminate all affection, Hibakusha funnels its acrimony into well-trodden channels that rarely take less than six minutes to run their course.

It’s true. They have a lot to say. Pity you won’t be able to understand a word of it. Allowing for lyrical abstraction and fantasy, they relax with a stroll along the parapets before sliding through gorgeous instrumental interludes. A moth to a flame; thought and sound collide on “Origin”, a vulgar, full-throttle display of technical prowess and organic power. Traveling back to the primitive wellspring of mortality and murder, stuttering machine-gun rhythms effectively elevate the state of excitement as the album progresses. Escalating tension by way of expert timing, they taunt the listener with a garbled message that could very well be a matter of life and death.

Tugging on the hempen cord around your heart and threatening to tear it from your chest, Incarnation is a fine account of Hibakusha, as they stand today. A caustic and cautionary rant infused with enough hot air to launch a dirigible, the incendiary “Bermuda” would be under-served by anything less than Driessen’s mastiff barks. Redrafting the tangled longitudes and latitudes, they only step away from twisted guitar runs and crowded arrangements to survey the damage before the plane they’re piloting spins directly into the North Atlantic. It’s all for the best, really. Suspended like a fakir by needled flesh and stretched expectations, Hibakusha is one supernatural boogieman who’s not content to hide in the shadows.