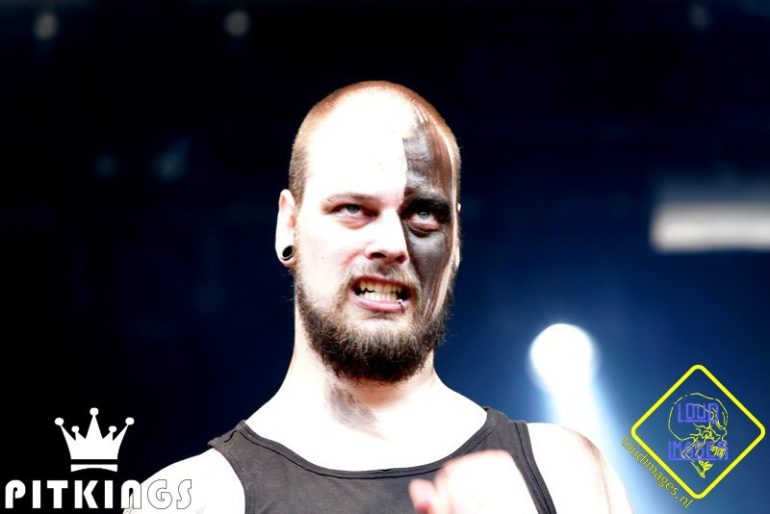 July 18, 2015 | Eindhoven – After a long wait of many years, there finally was a next edition of Dynamo. From now on it’s called Dynamo Metal Fest instead of ‘Dynamo Open Air’. A new concept, with 8 bands, one stage and 5.000 people in the audience. The festival was completely sold out and reason for that, has to be the great line-up. From legendary bands like Death Angel, Arch Enemy and Biohazard, to Dutch bands like Bodyfarm and Facelifter.

Facelifter
The first band hitting the stage was Facelifter. This Dutch band was one I waited for, because I had already heard of them and it sounded very good. They played a strong and powerful show and a nice variety of songs. The only thing that bothered me, was the voice changer or microphone settings. That gave, at some moments, a strange flattened sound. During the show there was already a quite amount of people, who mostly were pretty enthusiastic and excited. A band to keep an eye on! Bodyfarm
I listened to Bodyfarm before going to Dynamo and I liked it! Also live it was just good and they played a very nice show. The audience was also going wild, which means Bodyfarm can be proud at themselves. For me, a pleasant introduction to the live performance of this band. Orange Goblin
I never heard of this band before, so only the evening before I listened to some music of them. At Dynamo the band sounds very nice and heavy. Especially the singer is really enjoying himself, judging by his happy face and his moves to the audience. It was like the BFG (Big Friendly Giant) had found his thing in metal, because of his huge size. Musically it all sounds fine and the audience totally agreed with that. Alestorm
They were billed as “joepiedepoepie-metal” and yes … that’s what it was! The singer had no idea what that was, but did not wait for an explanation. There were from the beginning some people around with a pirate hat, dreadlocks-with-beads and an eye patch, but when Alestorm began to play it was one big madhouse! There were pirates everywhere at once and a few waving with inflatable pirate swords in the air. There was a lot of crowd surfing going on (even a man in a wheelchair) and the beer was flying around. From the first to the last note it was on big party and if you didn’t like the music, it was an amazing entertainment to watch the crowd go crazy. But is this really metal? Hmmm maybe not, but it was a party with great audience! Biohazard
Broken rib or not, Billy Graziadei from Biohazard jumps around the stage and even two times of the stage into the audience. The first time he almost jumps in my arms, so I take my change and the camera ‘rattles’ less than 30cm away from his guitar! The whole set is one piece of energy! He grumbles a few times about the sound, but is particularly pleased that he is back at Dynamo and tells how “fucking great” it was and is right now. Many old songs are on the setlist and that is appreciated by the audience! Biohazard is still an adventure, just like 25 years ago. Nuclear Assault
Pure thrash nostalgia and actually it’s better to leave it that way. Some songs I don’t even recognize when they are played, until suddenly a familiar text or riff passes by. It’s a farewell tour and maybe that isn’t a bad idea. They score high on the “list-of-nostalgia”, but certainly not musical. Pitty. Death Angel
Thé band I’ve been looking forward to! And they fulfilled my expectations completely! From the first second the thrash kicks your ears and the whole band is going totally crazy. On several moments the singer refers to the history that Dynamo and Death Angel have and that’s received enthusiastically by the audience. In front of the stage it’s one big mass of people. No doubt, Death Angel is the best band of the festival!

Arch Enemy
I was curious about the new singer of Arch Enemy. But from the first song they started, it was a disappointment. They also had the same problem in my opinion as Facelifter. Her voice become “weird” when she did long and deep grunts. Perhaps something technical, because otherwise it would sound nice. Also for me as photographer there was not much to do. The whole band stood in the back of the stage and only once there was someone at the monitor (perhaps afraid of the pyro?). Conclusion
Dynamo is back! A nice atmosphere and plenty of space for a sold out festival. If you were in the sun to much, there was enough space under the roof to sit in the shade to drink a beer and watch and listen to the music (though the sound in some places was less good). The negative points? Death Angel deserved to be headliner, long lines of people waiting for vouchers and a long queue in front of the toilets. Besides that, it was a very successful first edition of Dynamo Metal Fest 2015!

Up to next year, with the already confirmed metal band Sacred Reich!