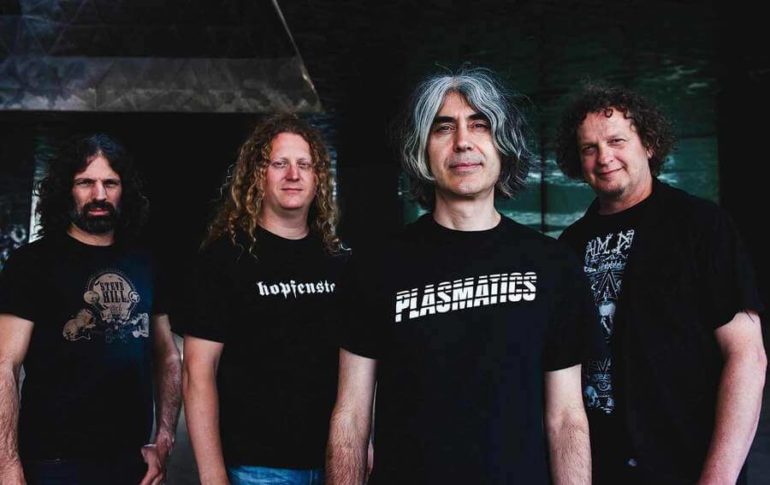 The last band playing the Dutch Heavy Music Quiz 2016 is the Canadian heavy/thrash metal band Voivod. At the Into The Grave festival Anton talked with Denis Bélanger (Snake) and asked him the 10 questions about Dutch heavy music. Can he beat the score of Soilwork (23), Moonspell (12),  Municipal Waste (9) and all the others? Let’s find out!

1. Which Dutch magazine for metal music was founded in 1980 by Metal Mike and Stefan Rooyackers?
Voivod: Uhhhh… Is it Kerrang? Metal Hammer? Oooww, from the Netherlands! Haha… Damn I’m screwed…
Anton: I have three options for you.
Voivod: Let’s do it.
Anton: Metal Hammer, Aardschok or RockHard.
Voivod: Aardschok.
Anton: Yes!
Voivod: The good answer?
Anton: Yes, it’s Aardschok. First point for you! You’ve been in there for several times.
Voivod: Yeah, for sure. But I didn’t remember that Aardschok was Dutch. We’re from Canada and we got a lot interviews by phone from those magazines. And then you have someone talking to you like: it’s …. from …. ? I forget all those names. Haha…
Anton: Aardschok
Voivod: Let’s go for that one.
Anton: Yeah, that’s correct. Haha… First point for you!

2. Which Dutch symphonic metal band is founded by Mark Jansen and got their name from Kamelot’s sixth album, released in 2003?
Voivod: Oh my God… I have no idea…. What are the options?
Anton: Epica, Autumn or Nemesea.
Voivod: Epica.
Anton: Yes!
Voivod: Not really my cup of tea, but good stuff they make and from high quality. Saw them them for the first time somewhere in Mexico a while ago.
Anton: You love it or hate. It’s simple. 2 points for you! Next question.

3. In 1990 Iron Maiden covered the song ‘Kill Me Ce Soir’. From which famous Dutch rock band is this song originally.
Anton: The song was on the B-side of Holy Smoke. Are you familiair with Iron Maiden?
Voivod: Yeah, the early stuff with Paul Di’Anno. Haha…
Anton: Haha… Well, that’s indeed early stuff!
Voivod: What are the options?
Anton: Focus, Golden Earring or Brianbox.
Voivod: Focus.
Anton: No.
Voivod: No?
Anton: Focus was also a famous rock band from The Netherlands with the song Hocus Pocus.
Voivod: Yeah, that’s what I thought.
Anton: But the right answer was Golden Earring. They also had a few hits with ‘Radar Lover’ and ‘When The Lady Smiles’.
Voivod: I’m sorry… Haha…
Anton: No problem. You are on your own. Most bands are with more people. Haha…

4. What have the Dutch death metal bands Asphyx, Pestilence and Hail of Bullets in common?
Voivod: I have to pick one?
Anton: No, these three bands have something in common. I wanna know what that is.
Voivod: Ooowww… Give me the options
Anton: They have the same drummer, same vocalist or the same guitar player.
Voivod: Drummer!
Anton: No. It was the same vocalist. Martin van Drunen. You know one of these bands.
Voivod: Yeah, I know them all, but I’m not really following it. Haha…
Anton: Do you follow new metal music?
Voivod: Well, the thing is, when you do music you always concentrating on what you’re doing. When it’s time to listen to bands you catch ‘m when they play live. I don’t know which album they made or what they did. I really have know idea what the latest album of Sepultura is, but I know Chaos AD, Roots, etcetera. I know my classics like Motorhead when I grew up, but in a certain age you stop discovering music. So you can’t catch up everything, but sometimes there are nice surprises!

5. In 2014 musician and composer Arjen Lucassen worked together with the female singer Anneke van Giersbergen on a musical metal project. What was the name of this Dutch project?
Voivod: Wow!
Anton: I give you the three options. Haha… The Gentle Storm, Star One or Stream Of Passion.
Voivod: Star One?
Anton: No, it was The Gentle Storm
Voivod: Ah…. I’m so bad…
Anton: Haha… Well, you have already two points.

6. Which Dutch DJ, composer and musician worked together with Sepultura, Fear Factory and Dog Eat Dog?
Voivod: A DJ? What are the options?
Anton: Hardwell, Rude Boy or Junkie XL.
Voivod: Never heard of them. Haha… Is it Rude Boy?
Anton: No, it was Junkie XL.
Voivod: BOOOEEEE….
Anton: Haha… No problem. Four questions to go!

8. Which Dutch punk band played over 1500 shows and still holds the record of best sold Dutch punk album?
Voivod: A new band or an old one.
Anton: They started in 1989 and stopped a few years ago.
Voivod: I’m thinking of something but that isn’t Dutch. Give me the options.
Anton: Heideroosjes, The Ex or The Apers.
Voivod: The Ex?
Anton: No, I was looking for Heideroosjes.
Voivod: Damn. What a difficult questions!
Anton: I heard that from some other bands too. Haha… Next year we make it a little bit easier for you.

9. Floor Jansen is since 2012 the lead singer of Nightwish. In which Dutch symphonic metal band was she singing between 1997 and 2009?
Voivod: What are the options?
Anton: Within Temptation, Delain or After Forever.
Voivod: Is it Delain?
Anton: No, it was After Forever.
Voivod: Ahhhhh…. I’ve seen Delain playing around at some festivals.
Anton: Yeah, they are still very busy. Just like Epica and also Within Temptation. Last question.

10. Which Dutch hardrock band scored a worldwide hit in 1982 with the song ‘Burning Heart’?
Voivod: I don’t know a lot about Dutch music I guess. Haha….
Anton: No, but after this quiz you know more then when we started! And next year we just do it again! Haha…
Voivod: Haha… Sounds like a plan. Give me the options again.
Anton: It’s Jackal, Sleeze Beez or Vandenberg.
Voivod: Is it Vandenberg?
Anton: Yeah!
Voivod: Haha… That’s pure luck! Haha…
Anton: Haha… Well, you collected 4 points.
Voivod: It’s not that great.
Anton: Haha. No, it’s certainly not the best score. You have to check PitKings more often. Haha…
Voivod: Haha… Yeah, will do.
Anton: What are the plans for tomorrow?
Voivod: A day off. A well deserved they off! Didn’t sleep the last two nights, so I can use some rest. We have a lobby call at 12. Pure luxury. Haha…
Anton: Sounds good. Thanks for your time and enjoy your sleep!

Voivod: 4 points. Check all the other bands that played the Dutch Heavy Music Quiz 2016.