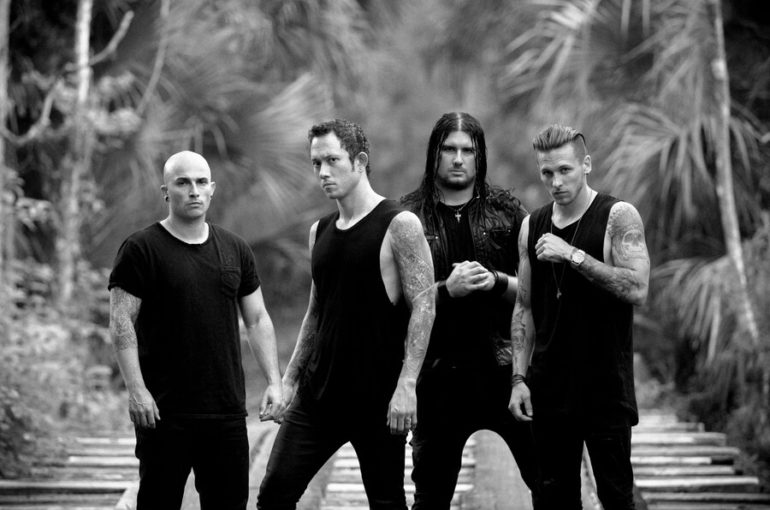 It’s time for band number 7 playing the Dutch Heavy Music Quiz 2016: the American metal band Trivium . It’s up to them to beat the score of Soilwork (23), Moonspell (12), Municipal Waste (9) or the other ones. At Graspop Anton talked with Corey Beaulieu (guitar) and Paolo Gregoletto (bass) and asked them 10 questions about Dutch heavy music.

1. Which Dutch magazine for metal music was founded in 1980 by Metal Mike and Stefan Rooyackers?
Trivium: That’s an easy one. It’s Aardschok.
Anton: Yeah!
Trivium: I knew what it was, but I didn’t know how to say it. Haha…
Anton: Haha… But is wel said. First 3 points for you!

2. Which Dutch symphonic metal band is founded by Mark Jansen and got their name from Kamelot’s sixth album, released in 2003?
Trivium: Maybe Delain? But give us the options.
Anton: Epica, Autumn or Nemesea.
Trivium: Epica would be the obvious choice, because they are the most well known. We go for Autumn.
Anton: No! It was Epica.
Trivium: Ah fuck! It was the obvious one.
Anton: Yes, sometimes it’s not that hard. Let’s go for number 3.

3. In 1990 Iron Maiden covered the song ‘Kill Me Ce Soir’. From which famous Dutch rock band is this song originally.
Trivium: We need options on that one.
Anton: Focus, Golden Earring or Brianbox.
Trivium: I know B is definetly a band from The Netherlands. So let’s go for Golden Earring.
Anton: Nice!
Trivium: They had a song called Twilight Zone? They still play it at classic radio a lot.
Anton: Really? They also have the songs ‘Radar Lover’ and ‘When The Lady Smiles’.
Trivium: Yes, of course. Great music.
Anton: 4 points for you. Next.

4. What have the Dutch death metal bands Asphyx, Pestilence and Hail of Bullets in common?
Trivium: I think we need the options.
Anton: They have the same drummer, same vocalist or the same guitar player.
Trivium: Pfff….
Anton: I can help you a bit more. Is it Ed Warby the drummer, Martin van Drunnen the vocalist or Ruud Jolie the guitar player.
Trivium: It’s a difficult one. We go for the same drummer.
Anton: No, it was the same vocalist. Martin van Drunen.
Trivium: Never heard of him unfortunatly.
Anton: No worries, still 4 points for you guys.

5. In 2014 musician and composer Arjen Lucassen worked together with the female singer Anneke van Giersbergen on a musical metal project. What was the name of this Dutch project?
Trivium: We need the options.
Anton: The Gentle Storm, Star One or Stream Of Passion.
Trivium: Stream of Passion.
Anton: No. It’s also a project of Arjen Lucassen, but not the one with Anneke van Giersbergen. You know Anneke van Giersbergen? She used to be the lead singer of The Gathering.
Trivium: Yes, I know her and there are ringing some bells when I hear those names, but it’s hard to put it all together. Haha…
Anton: Yes, it’s not that easy. Still 4 points.

6. Which Dutch DJ, composer and musician worked together with Sepultura, Fear Factory and Dog Eat Dog?
Trivium: Oh my God. A DJ? I think we need the opions.
Anton: I have Hardwell, Rude Boy or Junkie XL.
Trivium: I know Hardwell, but I don’t think he did something with metal. We go for Junkie XL.
Anton: Yes, that’s right. Cool you know that one. 5 points already.

7. A very popular metal band from The Netherlands is Carach Angren. What type of metal do they play?
Trivium: Carach what?
Anton: Carach Angren. Really no idea what it means. Haha… They also played at Graspop yesterday.
Trivium: No idea. What are the choices?
Anton: Groove metal, black metal or thrash metal.
Trivium: I think we have to guess this one. Is it thrash metal?
Anton: No! They play black metal. The guys look like Kiss and King Diamond.
Trivium: I never heard of that band in my life.

8. Which Dutch punk band played over 1500 shows and still holds the record of best sold Dutch punk album?
Trivium: I think we don’t know that much about punk. What are the options?
Anton: De Heideroosjes, The Ex or The Apers.
Trivium: I never heard of any of them. We go for option 2.
Anton: The Ex. No, I was looking for De Heideroosjes.
Trivium: Yes, that’s a tough one.
Anton: Hmmm… You started very well, but now…
Trivium: I think because you named some bands we in America never heard of. Haha…
Anton: Haha… I think you are right. Maybe the last two questions are a bit more easier.

9. Floor Jansen is since 2012 the lead singer of Nightwish. In which Dutch symphonic metal band was she singing between 1997 and 2009?
Trivium: I know she had this band called ReVamp.
Anton: That’s true. But before that.
Trivium: Is it not Epica? Just give us the options.
Anton: Within Temptation, Delain or After Forever.
Trivium: Ah fuck. Delain again. It’s not Within Temptation and Delain has a different singer. So it has to be After Forever.
Anton: Perfect!
Trivium: A process of illumination. Haha…
Anton: Well done. 6 points right now. Last question already.

10. Which Dutch hardrock band scored a worldwide hit in 1982 with the song ‘Burning Heart’?
Trivium: This burning heart of mine… It’s from Vandenberg!
Anton: Yeah!!!
Trivium: Here you go! The hardrock and heavy metal questions are doable, but that punk stuff is to difficult.
Anton: Haha… Yeah, we mixed it a little bit. Let’s see. You score 9 points. Not the best score, but also not the worst one.
Trivium: We tried! It’s just that those band are not so well known in America. I missed God Dethroned by the way!
Anton: Yeah, we had a question about them last year. Maybe we have to make it a bit easier next year. Haha…
Trivium: For now I’m gonna research some Dutch punk bands. Haha…
Anton: That would be great. Thanks for your time and good luck with your show today!

Trivium: 9 points. Check all the other bands that played the Dutch Heavy Music Quiz 2016.