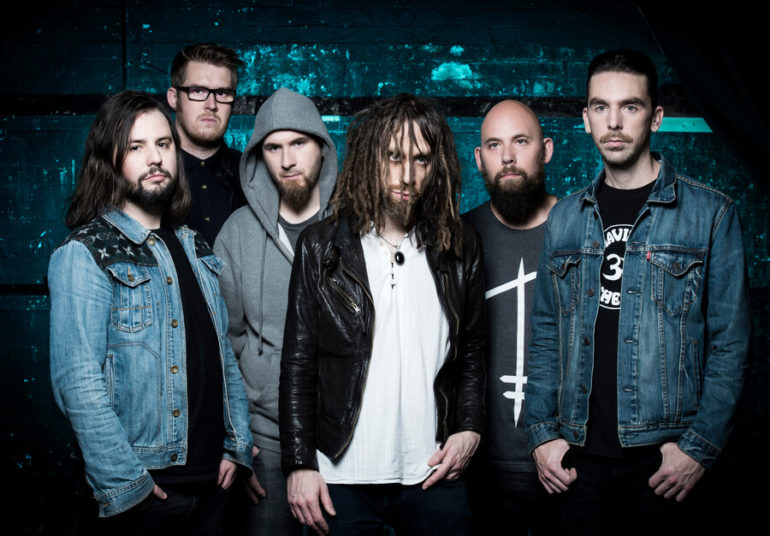 Band number 6 playing the Dutch Heavy Music Quiz 2016 is the British progressive metal band SikTh. It’s up to them to beat the high score of Soilwork (23). At Graspop Anton talked with all the band members of SikTh and asked them the usual 10 questions about Dutch heavy music.

1. Which Dutch magazine for metal music was founded in 1980 by Metal Mike and Stefan Rooyackers?
Sikth: Well that’s a good question. We have no idea. Just give us the options!
Anton: Metal Hammer, Aardschok or RockHard.
Sikth: We go for RockHard.
Anton: No, that’s from Germany. It’s Aardschok.
Sikth: Serious? No points for us?
Anton: No, I’m sorry. Maybe next question.

2. Which Dutch symphonic metal band is founded by Mark Jansen and got their name from Kamelot’s sixth album, released in 2003?
Sikth: Really don’t no the answer. Give us the options again.
Anton: Epica, Autumn or Nemesea.
Sikth: I would say Autumn. I would say Nemesea. Maybe it’s Epica? They all sound right. Haha…
Anton: Haha… Which one is it gonna be?
Sikth: Well, let’s go for the third one. Nemesea.
Anton: No. It was Epica.
Sikth: Oooooowwww, I said so!
Anton: Unfortunatly. Again no points for you guys…

3. In 1990 Iron Maiden covered the song ‘Kill Me Ce Soir’. From which famous Dutch rock band is this song originally.
Sikth: Options please. Haha…
Anton: Sure? Well, here they are. Focus, Golden Earring or Brianbox.
Sikth: I know Focus had the song Hocus Pocus. I like it, but I don’t think Maiden covered it.
Anton: Well, actually they did, but that’s not the one I’m looking for.
Sikth: And Brainbox was with that guitar player, Akkerman. But he’s not in anymore. Do we get extra points for this? 20 points? Haha…
Anton: Haha… No, I have to be strict. Haha… So, Focus, Golden Earring or Brianbox.
Sikth: We are going for Focus.
Anton: No! It was Golden Earring. They had two big hits in America with Radar Love and When The Lady Smiles.
Sikth: But we are English. Haha…
Anton: Haha… I know, it was just an example. Still zero poins for you guys. Number 4!

4. What have the Dutch death metal bands Asphyx, Pestilence and Hail of Bullets in common?
Sikth: I know Asphyx and Pestilence. I actually like Pestilence. Is it the same singer?
Anton: Yeah!
Sikth: Woohoo! First 3 points. How much points do we need?
Anton: Well, Soilwork had 23 points yesterday. Haha…
Sikth: Damn… We are typical English. Starting slow…
Anton: Haha… Up to the next one!

5. In 2014 musician and composer Arjen Lucassen worked together with the female singer Anneke van Giersbergen on a musical metal project. What was the name of this Dutch project?
Sikth: What were the names?
Anton: Arjen Lucassen and Anneke van Giersbergen. She used to be the lead singer of The Gathering.
Sikth: I’m getting a Lager. I think that’s gonna help. Haha… Just give us the options.
Anton: The Gentle Storm, Star One or Stream Of Passion.
Sikth: Star One. Stream Of Passion. I’m going whatever… Is there anyone right? Let’s go for Star One.
Anton: No, it’s The Gentle Storm
Sikth: Damn. No one knows this!
Anton: Haha… Maybe it’s a bit difficult. Still 3 points for you.

6. Which Dutch DJ, composer and musician worked together with Sepultura, Fear Factory and Dog Eat Dog?
Sikth: There’s is a name coming up in my mind, but I can’t make it clear. Is it Rhys Fulber?
Anton: No, he isn’t Dutch.
Sikth: Well, give us the options.
Anton: Hardwell, Rude Boy or Junkie XL.
Sikth: Junkie XL!
Anton: Yes, it’s Junkie XL.
Sikth: He was on Roadrunner. A Dutch label.
Anton: That’s right. With his first albums. Later on he had a hit with Elvis’ remix of A Little Less Conversation.
Sikth: Yeah, of course! Number one in UK! No we get some bonus points? Haha…
Anton: Yes, I give you one bonus point for this one. Haha…
Sikth: Woohoo! And what about those 20 extra points?
Anton:I can’t remember. Haha…
Sikth: Why don’t you just ask questions about Dutch football players or darts players? After this the bonus round is coming?
Anton: Hahaha… Because it’s a music quiz. But afterwards we discuss about football and darts. For now you scored 5 points. Let’s continue to the next question!

7. A very popular metal band from The Netherlands is Carach Angren. What type of metal do they play?
Sikth: Black metal!
Anton: Yes! You know the band?
Sikth: No! Hahaha…
Anton: Haha… It sounded like you know them for years?
Sikth: Just a feeling. Haha…
Anton: Nice one. They played here last Friday. 8 points already.

8. Which Dutch punk band played over 1500 shows and still holds the record of best sold Dutch punk album?
Sikth: We have to go for the options.
Anton: I have De Heideroosjes, The Ex or The Apers.
Sikth: The second one.
Anton: No. De Heideroosjes. A diffult one. Let’s go for number 9

9. Floor Jansen is since 2012 the lead singer of Nightwish. In which Dutch symphonic metal band was she singing between 1997 and 2009?
Sikth: She’s not atractive the woman?
Anton: Mwa, not really (sorry Floor).
Sikth: From a distance? Haha… Well, give us the options.
Anton: Within Temptation, Delain or After Forever.
Sikth: Delain. Within Temptation. But why should she leave Within Temptation? It’s a huge band. Both bands are big. But just go for that one.
Anton: No, it was After Forever. Still 8 points for you. Last question!

10. Which Dutch hardrock band scored a worldwide hit in 1982 with the song ‘Burning Heart’?
Sikth: Burning Heart?
Anton: Yes, and the guitar player played for serval years witj Whitesnake.
Sikth: Oow, Adrian Vandenberg.
Anton: Yes! It was Vandenberg. 11 points for you!
Sikth: Well, that’s pretty good isn’t it? Is it the worst?
Anton: Thanks for your time guys. Whats up next?
Sikth: I think we’re going home and research Dutch metal. Because I feel such a fool no to know some of these questions. Anton: Haha… Let’s go!

Sikth: 11 points. Check all the other bands that played the Dutch Heavy Music Quiz 2016.