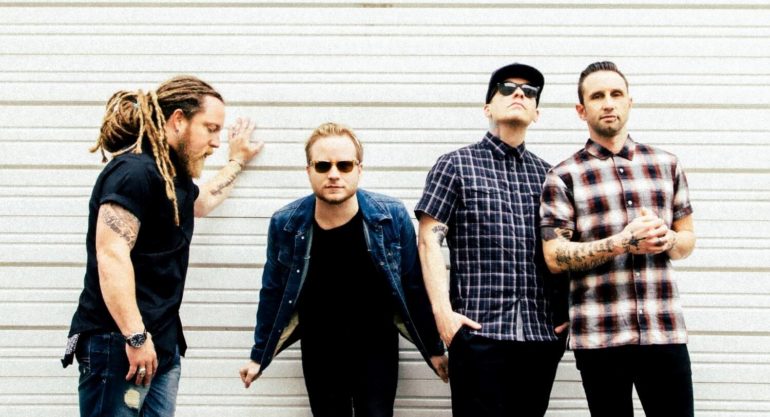 Band number 8 playing the Dutch Heavy Music Quiz 2016 is the American hardrock band Shinedown . It’s up to them to beat the score of Soilwork (23), Moonspell (12), Municipal Waste (9) and all the others. At Graspop Anton talked with Barry Kerch (drummer/founding member) and Brad Steward (bass) and asked them 10 questions about Dutch heavy music.

2. Which Dutch symphonic metal band is founded by Mark Jansen and got their name from Kamelot’s sixth album, released in 2003?
Shinedown: It’s not Epica isn’t it? Just give us the options.
Anton: Are you sure? Or just listen to what he said…
Shinedown: We go for Epica. Haha…
Anton: Haha… Yeah!
Shinedown: Ah, nice. I didn’t recognize the guy his name, but it’s with Simone isn’t it?
Anton: Yes, that’s right. First 3 points for you!

3. In 1990 Iron Maiden covered the song ‘Kill Me Ce Soir’. From which famous Dutch rock band is this song originally.
Shinedown: Oh, wow. It’s a 70s band?
Anton: Yes, with a world wide hit called Radar Love.
Shinedown: I know the answer, but we need the options to recognize it.
Anton: Focus, Golden Earring or…
Shinedown: … Golden Earring! Haha… I knew that one, because I used to cover ‘Radar Love’ with the band.
Anton: Really? Great song! And 4 points for you guys.

5. In 2014 musician and composer Arjen Lucassen worked together with the female singer Anneke van Giersbergen on a musical metal project. What was the name of this Dutch project?
Shinedown: Haha… no idea! Can we have the choices please?
Anton: The Gentle Storm, Star One or Stream Of Passion.
Shinedown: I like answer A. I go with it.
Anton: Yes, it’s The Gentle Storm! A wild guess?
Shinedown: Well, it sounded like the best possibility. Haha…
Anton: Ever heard of Arjen Lucassen? Or Anneke van Giersbergen from The Gathering?
Shinedown: Yes, we know The Gathering. But no idea what Anneke is doing now.
Anton: Well, she does a lot of projects and solo things. Still going strong. You have now 5 points in total.

6. Which Dutch DJ, composer and musician worked together with Sepultura, Fear Factory and Dog Eat Dog?
Shinedown: Uuuuuuhhhh….. Is it Junkie XL?
Anton: Yes, great!
Shinedown: Didn’t he also composed the music for the Mad Max movie?
Anton: Yes, that’s right. He’s doing a lot of music for movies. And he had also a number one hit with the remix of the Elvis song A Little Less Conversation.
Shinedown: Yes, of course. Nice one.
Anton: A busy guy. 8 points already.

7. A very popular metal band from The Netherlands is Carach Angren. What type of metal do they play?
Shinedown: Carach what?
Anton: Carach Angren.
Shinedown: Whooo! And you wanna know what type of metal they play? Symphonic? Gothic? Just give us the categories. There are so many types of metal! Haha…
Anton: I have three for you. Groove metal, black metal or thrash metal.
Shinedown: Weird name, so it could be black metal. Fuck it. We go for black metal!
Anton: Yes! They call it themselves black horror metal.
Shinedown: Ah right. Full make-up.
Anton: Of course! One extra point for you makes 9 in total.

9. Floor Jansen is since 2012 the lead singer of Nightwish. In which Dutch symphonic metal band was she singing between 1997 and 2009?
Shinedown: That was After Forever!
Anton: Wow! Great! You know Floor Jansen?
Shinedown: Yes, we do. We just played with Nightwish at the Download Festival a few days ago. So, we talked with each other about music stuff.
Anton: Nice! A good preperation for this quiz. Haha… 12 points already. Up to the last question.

10. Which Dutch hardrock band scored a worldwide hit in 1982 with the song ‘Burning Heart’?
Shinedown: Burning Heart? 1982?
Anton: Yes. A long time ago.
Shinedown: We were very young then. Give us the options.
Anton: Jackal, Sleeze Beez or Vandenberg.
Shinedown: Vandenberg.
Anton: Yes! You know Adrian Vandenberg? The guitar player.
Shinedown: No.
Anton: He was the guitar player for Whitesnake for several years.
Shinedown: Ah yeah. Now I know it. But I didn’t know he was from The Netherlands.
Anton: Yes, he is. So I hope you learned something from this quiz. Haha…
Shinedown: Haha… How did we do?
Anton: Well, let’s see. 13 points! So, that’s the second place for you guys.
Shinedown: Not bad at all. It’s respectable.
Anton: Thanks for your time and enjoy your stay here at Graspop.

Shinedown: 13 points. Check all the other bands that played the Dutch Heavy Music Quiz 2016.