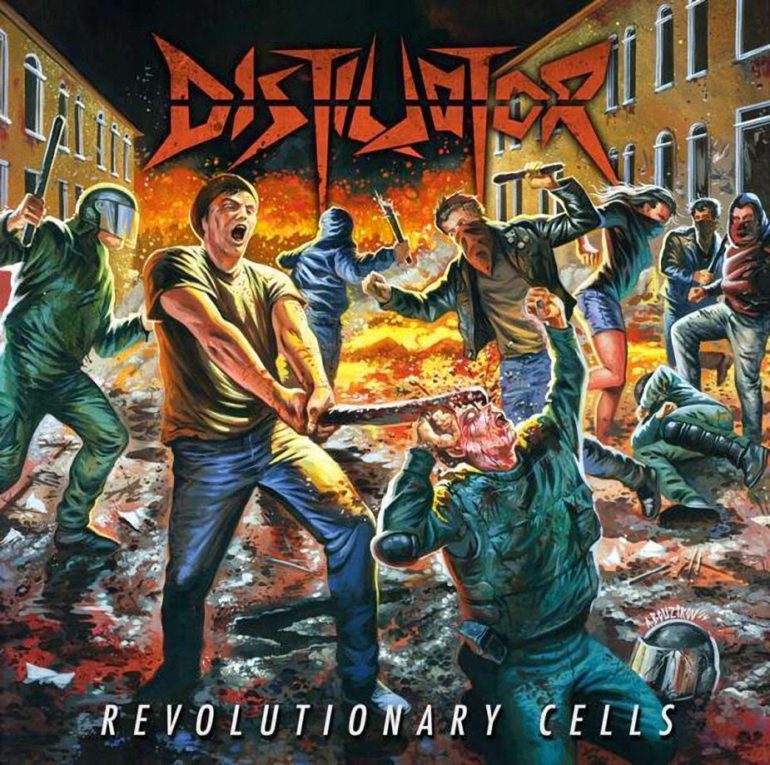 Distillator is a 3-piece old school trash metal formation from Enschede. Packed with spandex trousers and bullet belts, the band blows you away with heavy riffs and high-pitched screams. In two years time, they already played over 70 shows through Europe and they are now well-known under Dutch thrash metal fans. The music instantly takes you back to the 80’s, when trash metal was at a peak. Influences by Slayer, Sodom, Megadeth and others, they released their debut-album ‘Revolutionary Cells’ at February 10, 2015.

Revolutionary Cells: we want more!
The album kicks off with ‘Guerrilla Insurgency’ (video). It sounds just perfect and everything falls into it’s place. Tight drums with mean riffs and insanely fast-sounding solo’s. A fantastic opener followed by another amazing track ‘Saturation Bombing’.

On ‘Distinct or Extinct’ the band takes of slower than the other songs. Nevertheless the song is strong and has more melody. ‘Revolutionary Cells’ takes the tempo slightly back to where they left off with a mean riff and screeching solo’s. ‘Bloody Assault’ contains pounding drums, and recognizable riffs. The production of this album is almost flawless and drum works are amazing. Combined with extremely fast guitars and a voice that reminds you of Tom Araya, this album does exactly what you can expect from 80’s thrash metal. With ‘Sacred Indoctrination’, the last song on the album, the band trashes the album one last time.

Conclusion
It’s an amazing trash metal album! If you like trash metal bands, this is really something to look into. The production is almost flawless. The only thing to remark is that it didn’t last longer. The whole album takes about half an hour and is over to fast. I’m looking forward seeing more work from Distillator.