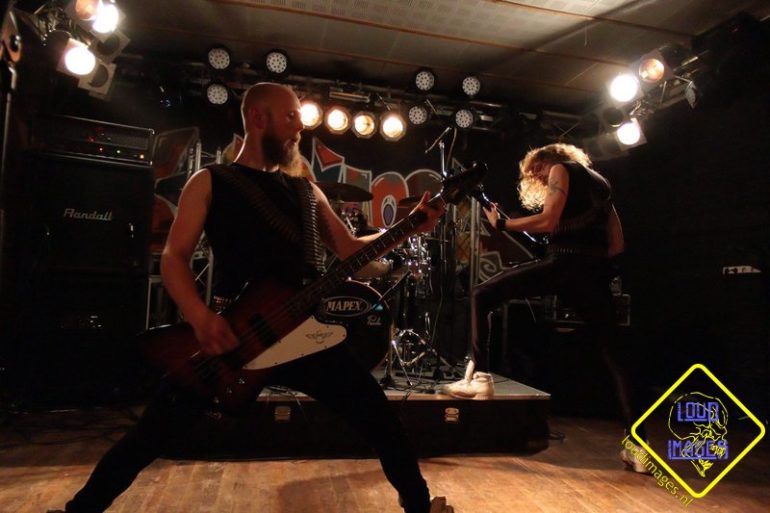 October 17, 2015 | Kiehool, Bergum – A nice thrash evening in the small venue of Kiehool, Burgum. An evening with some old and some new bands: Sackback, Grim Ordeal, Incursion Dementa and Distillator.

Sackback
The evening kicks off with the youngsters of Sackback. I’ve seen these guys before on Dokk’em Open Air. They performed on the Partystage and got quite a cheer. Although there is not a big crowd, there are enough friends and family to cheer them on.
The faces of all 4 are pretty serious when they start. During their performance they loosen up and they play a nice set of well played covers of AC/DC, Iron Maiden, Black, Sabbath among others and a few own songs. A nice warm-up. Grim Ordeal
After a short change over, Grim Ordeal climbs the stage. Grim Ordeal plays an interesting mix of thrash, death and groove metal and this Deventer based band starts fast and furious. The small stage of Kiehool is filled to the brim with these fierce playing fellows. They are here to kick your ass! It is a pity the crowd is not getting much bigger, because these guys play their stuff tight, loud and fast. Frontman Otto might not be the biggest, but his voice compensates this by far. He spits out the lyrics with loads of energy and power which totally convinces. Incursion Dementa
Next up are the veterans of Incursion Dementa. They still have a rather big following of fans of all ages. Although the band changed of guitarist and drummer this year, they still sound pretty impressive. Incursion Dementa was thrashing all around Europe, when a big part of the crowd wasn’t even born! Singer Benny is putting lots of energy in the performance and it pays off. It’s fun to watch these ‘oldies’ having a truckload of fun on stage and emitting it to the crowd. The band has brushed up some old songs and these sound refreshing! It’s a pity the band is cut of twice by a powerfailure in the venue. This unfortunately cuts the performance short, to investigate and solve the problem. Distillator
Headliner this evening is Distillator; a three piece band from Enschede full of energy, power and loads of persuasion! Founded in 2013 and their first albums only dates back to February of this year. So this is a brand new band, but playing eighties metal as if they were born in the sixties/seventies! Add to this an impressive list of great bands they already played with, combined with the number op European venues they played at and you know these are no amateurs.
It’s great fun to see their outfit is finished off with bullet belts, spandex trousers and bright white ankle-high sneakers… this looks and sounds promissing! Singer Laurens and bass player Frank are full of energy on the stage. Numerous position changes are done running on the small stage of Kiehool. Drummer Marco puts all his energy in keeping it tight and fast and is doing a hell of a job with it. It’s really unfortunate the crowd has diminished somewhat, because these guys are really good! They are fast, they are loud and yes again: the are fucking good! If you like oldskool thrash, these guys are a must see and hear.